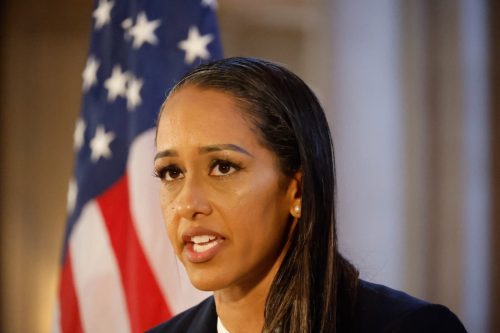 SAN FRANCISCO, CA – Brooke Jenkins, who was appointed as San Francisco District Attorney after the recall of former DA Chesa Boudin, made it official Monday, announcing she’s running for the office, according to The San Francisco Chronicle.

Jenkins told dozens of supporters, “On June 7 the voters of San Francisco spoke very loudly that they wanted something different — that they wanted to take this city back in the right direction, and that is what I have been doing for the past 30 days.”

“The appointed top prosecutor, who drew attention after she quit working for the District Attorney Chesa Boudin last year and became a key spokesperson for the campaign to oust him, has signaled she may reverse some of the reforms instituted by the previous administration” the Chronicle explained.

Swan noted Jenkins’ “entrance into the race comes a week after Boudin announced he did not plan to run this year, two months after his historic recall.”

The Chronicle also noted, “Mayor London Breed named Jenkins to succeed Boudin shortly after the recall results were certified, a decision that delighted many of Boudin’s detractors but also stirred controversy in a city deeply polarized over crime and criminal justice.

“People who favored Boudin’s progressive ideology, his promise to reduce mass incarceration and his aggressive prosecutions of police use-of-force, feared those efforts would unravel under the new district attorney,” added the Chronicle report.

“Several outspoken members of the recall campaign appeared in the scrum, along with Supervisor Matt Dorsey, a former top spokesperson for the San Francisco Police Department who was also appointed by Breed. Some people waved blue pom-poms as others burst into sporadic applause and chanted Jenkins’ name during her speech,” Swan wrote.

Jenkins has stated that her top priorities in office will be “cracking down on open air drug markets, particularly in the Tenderloin neighborhood; holding violent offenders accountable; staving off gun violence and preventing attacks against Asian Americans,” according to the article.

Swan commented that in the last month Jenkins has “pledged to review dozens of plea offers extended to accused fentanyl dealers during Boudin’s tenure. She reversed more than 30 of them last week, representatives from her office said.”

Jenkins also said she planned to dismiss charges brought against at least 17 people accused of possessing drug paraphernalia, previously saying that the cases were brought ‘out of accordance with our office’s policy.’”

Jenkins also told The Chronicle on Monday she is still “crafting a policy that would dictate whether to try juveniles as adults.”

According to the Chronicle, “Jenkins said she would make sure people suffering from addiction would have access to treatment, while trying to blunt the devastation caused by rampant fentanyl use, and clamp down on people who sell it.”

Jenkins reportedly stated, “There has to be enforcement of the laws that exist in this city and in this country,” adding, “What we’re not doing is returning to some extreme like the war on drugs.”