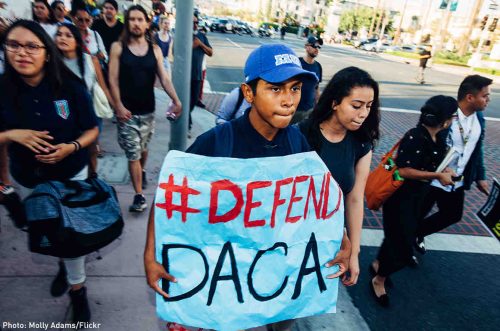 WASHINGTON, DC  – The Biden Administration and the Department of Homeland Security recently collaborated on a regulation to codify the DACA (Deferred Action for Childhood Arrivals) program, intended to increase the protection of DACA in court as applicable.

This protection, however, does not go beyond maintaining the status of current DACA recipients, said critics, noting a decision anticipated to be made within a matter of weeks by the Fifth Circuit Court of Appeals threatens the full protection of undocumented youth if it rules against DACA.

The ruling does not expand eligibility or reopen the program for new applicants, and does not continue processing the tens of thousands of hopeful people who have applied just in the last year, nor does it call to the hundreds of thousands who never even got the chance to apply, critics added.

These people are desperate for a change that is unfortunately uncertain, warned the IIC (Interfaith Immigration Coalition), which has much to say about the shortcomings of this ruling and what needs to be done moving forward.

Claudia Marchan, who was a DACA recipient, said, “We must not accept anything less than a pathway to citizenship.”

Marchan noted that, although she appreciated the protection from deportation and the ability to work, it was all temporary—an aspect of the program that she, along with the rest of the coalition and many others, deems unacceptable.

Migration Policy Advocacy Coordinator for the American Friends Service Community, Imani Cruz, called the program and its temporary protections a necessary “stop gap” acting as a sort of bridge for a pathway to citizenship.

Cruz was sure to note the bridge is currently leading to nowhere without the possibility of access to permanent status for all DACA recipients, along with all of the other undocumented people in the U.S.

“The Biden administration and Congress must do more than keep the status quo,” she insisted.

Barbara Weinstein, Director of the Commission on Social Action of Reform Judaism, agreed with Marchan and Cruz that DACA and the latest ruling are positives, but acknowledged there is more work to be done in protecting the youth.

Quoting from Leviticus, she said that “the stranger who resides with you shall be to you as one of your citizens; you shall love them as yourself, for you were strangers in the land of Egypt.”

She, too, called the pathway to citizenship no better than a treacherous dirt road.

Another supporter of DACA and executive director of Catholic Legal Immigration Network, Inc., Anna Gallagher, urged Congress to act with “mercy, justice and compassion by creating a path to legal residency and citizenship for DACA recipients – our neighbors, friends and clients – whose home is here in the U.S.”

Franciscan Action Network Executive Director Michele Dunne acknowledged undocumented people brought to the U.S. at a young age when they had no choice, and urged those people are in no way any less of a citizen than anyone who is legally recognized as a citizen.

She emphasized those who “have been educated here, are employed here, and are engaged in service to others” should not have to live with the constant fear of “being abandoned and separated from the only country they know.”

Other critics included the Director of Civil and Human Rights from The United Methodist Church General Board of Church and Society, the Chief Policy Officer of National Council of Jewish Women and the Migration Coordinator for Youth Engagement for the Ignatian Solidarity Network.

These members highlighted equal treatment and value of all human beings, permanent over temporary and partial pathways, and major expansion on comprehensive immigration reform.

They maintained that although DACA is a step in the right direction, the program is ultimately left unprotected and vulnerable to future legal challenges, its current and hopeful recipients are also unprotected and remain denied access to a quality of life that should be standard to humanity.

Share:
Tags:DACAImani CruzMigration Policy Advocacy Coordinator for the American Friends Service Communitypathway to citizenshipprotection from deportation and the ability to workThe Biden Administration and the Department of Homeland Security
Previous : New CA Measure to Expand California’s Gun Violence Prevention Efforts
Next : Report: One in Three People Had Sentences Lengthened Due to Three-Strikes Law

Taylor is a second year student at UC Davis pursuring a degree in Communication with a minor in Philosophy. She plans to graduate in 2023 and hopes to attend law school post-graduation to explore her many passions.