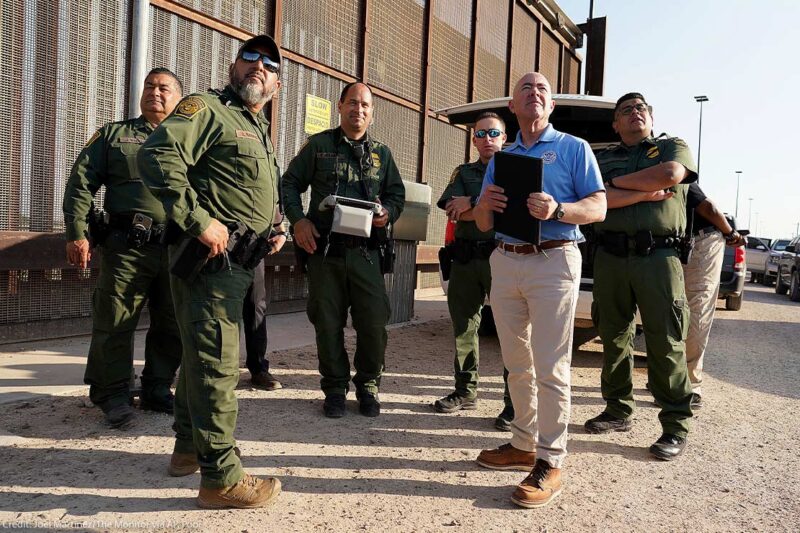 While a memo from DHS Secretary Mayorkas is in legal limbo, the administration should still take action to protect immigrant communities.

By Katie Hoeppner and Naureen Shah

The Biden administration asked the Supreme Court last month to allow it to proceed with guidelines limiting who can be arrested and deported. The guidelines, outlined in a memo by Homeland Security Secretary Alejandro Mayorkas, faced xenophobic and politically charged legal challenges brought by Texas and Louisiana. The states’ challenges blocked the enforcement guidelines nationally, with lower courts split on the issue.

The Mayorkas guidelines memo was intended to move Immigration Customs and Enforcement (ICE) away from Trump’s indiscriminate enforcement approach of deporting as many people as possible, regardless of their family and community ties. Taking up the Obama administration’s approach, Mayorkas directed ICE agents to focus their time and resources on individuals who pose a threat to “national security, public safety, and border security.” He added that agents should exercise “discretionary authority in a way that protects civil rights and civil liberties” and be “guided by the fact that the majority of undocumented noncitizens who could be subject to removal have been contributing members of our communities for years.”

Advocates, including the ACLU, were highly critical of the guidelines because they left too much discretion with ICE agents, despite their documented xenophobia. But for all its serious flaws, the memo provided attorneys a powerful tool for advocating to protect their clients from deportation.

The Supreme Court, however, declined to restore the deportation guidelines while the case proceeds, and will instead hear the case on the merits in November. For now, Mayorkas’ memo is not in force, leaving ICE agents with what they had under Trump: nearly unfettered discretion to pursue deportations.

While this is a major setback for Mayorkas, he can still dismantle the infrastructure that makes indiscriminate deportations a threat to the millions of people he acknowledged “work on the frontlines in the battle against COVID-19, lead our congregations of faith, teach our children, [and] do back-breaking farm work to help deliver food to our table.”

Here are two actions the Biden Administration can take:

For years, ICE has tapped local law enforcement agencies to help identify immigrants for deportation, enabling ICE to stretch its tentacles into communities across the country and deport more people than it would be able to on its own, under a set of partnerships known as 287(g). These partnerships expanded five-fold under President Trump, and allow sheriffs notorious for racism, xenophobia, and civil rights violations to target and attack immigrants in their communities. ICE calls 287(g) its “force multiplier.”

Recently, the ACLU released a research report that found 59 percent of 287(g) sheriffs have documented records of anti-immigrant rhetoric, and over half have expressly advocated inhumane federal immigration policies, in some cases while vowing to disobey any federal directives they disagree with. Nearly two-thirds of 287(g) partners have records of racial profiling and other civil rights abuses, while more than three-quarters operate detention facilities with documented patterns of abuse and inhumane conditions.

As a candidate, President Biden pledged to eliminate 287(g) contracts initiated under Trump, but over 140 contracts with state and local law enforcement agencies are still in effect to this day.

Now that Secretary Mayorkas’ guidelines have been stalled, it is more important than ever for the Biden administration to end these partnerships, which directly threaten the millions of people Mayrokas has acknowledged as being integral members of our communities by subjecting them to racial profiling, abuse, and separation from their families and loved ones.

For decades, the U.S. government has overinvested in punishment and detention, and underinvested in community-based support services, even as ICE continues to amass a track record of egregious civil liberties violations. The result of this investment is an immigration detention machine that is fundamentally bloated, cruel, and inhumane.

At present, about 24,000 people are languishing in ICE detention, in sites often run by for-profit, private prison companies. They may be detained for the duration of their removal proceedings — which could last months or even years. Thousands of these people are trapped in inhumane, unsafe living conditions, where they are denied access to lawyers who could help them secure release. Many are separated from their families, including their U.S. citizen-children, even though they could be free — on bond, their own recognizance, or community-based alternatives to detention.

But there is another way. The government can shrink the infrastructure that has been used to arrest, incarcerate, abuse, and traumatize immigrants.

The Biden administration took an important step toward shrinking the infrastructure of civil immigration detention when it requested funding for 9,000 fewer detention beds in its proposed budget for next fiscal year. Secretary Mayorkas also announced plans to close or limit the use of six detention sites, five of which were on a list of 39 detention sites the ACLU asked Mayorkas to shutter in an April 2021 letter, and stopped detaining families at three family detention sites.

But ICE still maintains a sprawling detention network of about 200 detention sites around the country, and has made plans to expand privatized, for-profit immigration detention — despite outcry from dozens of congressional Democrats.

If the Biden administration stops over-investing in the infrastructure for detaining immigrants, then many of the people Secretary Mayorkas rightfully identified as providing important contributions to the country won’t have to live in daily fear of arrest or deportation. The administration should take action now.