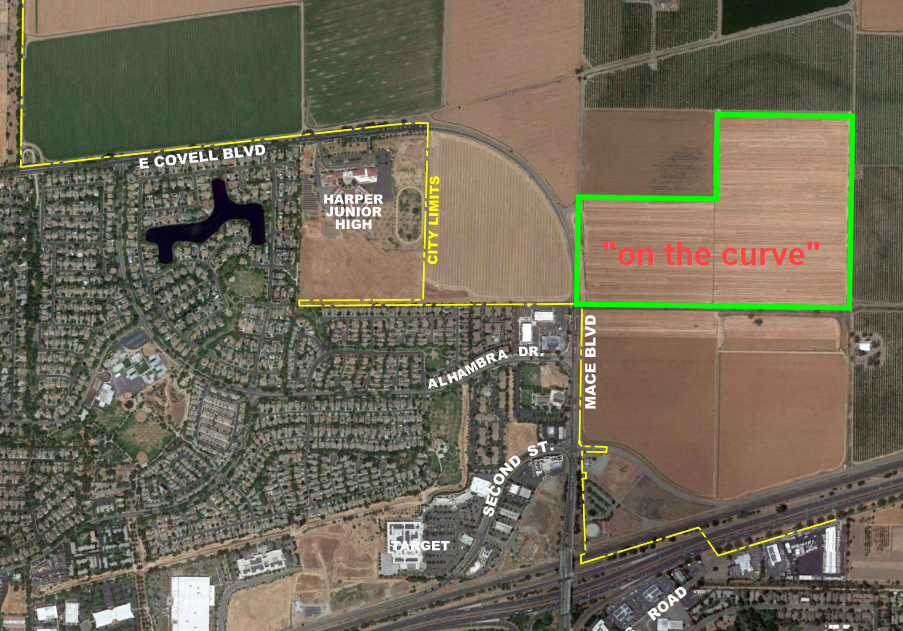 Davis, CA – One of the biggest contentions during the DiSC 2022 campaign was that the project size had not actually been reduced—the belief being that the northern portion of the original DISC project would be submitted at a later date.

However, the Vanguard learned this week that, in fact, Reynolds & Brown have submitted a preapplication for a residential project on the 85 acres along the Mace/Covell Curve.

“Our submittal of this preapplication is meant to commence the City’s consideration and review of the subdivision proposal and commence a Sphere of Influence amendment in light of the ongoing housing crisis,” Attorney Matt Keasling of Taylor and Wiley wrote the city this week.

“This project provides an excellent opportunity for the City to increase its housing stock, including a considerable number of multi-family and high density single-family residential units,” he added. “The project will provide an opportunity for families and individuals at all socioeconomic levels to rent or buy a home in Davis. In addition to housing, the project provides an extension of Davis’s green belt system, 26-acres of agricultural buffer area and an inviting 5-acre neighborhood park.”

The project, “On the Curve” is the third project that has been submitted to the city in the area following Palomino Place and the Signature Property.  It would require a Measure J vote.

“For more than twenty years, with the exception of the redevelopment of the Hunt-Wesson industrial canning site into The Cannery, Davis has not constructed any meaningful housing subdivisions and has lagged behind the region in overall housing development,” the developers write.  “Reynolds & Brown presents a residential subdivision ‘On the Curve’ as an

opportunity for Davis to do its part to combat the Statewide housing crisis.”

In 2019, Governor Newsom along with the state legislature “officially declared California to be in the midst of a housing crisis.”

SB 330, “The Housing Crisis Act of 2019,” “paints an ominous picture of the situation the State is facing when it comes to housing the population and the detrimental consequences of our inaction.”

The act states, “California has a housing supply and affordability crisis of historic proportions. The consequences of failing to effectively and aggressively confront this crisis are hurting millions of Californians, robbing future generations of the chance to call California home, stifling economic opportunities for workers and businesses, worsening poverty and homelessness, and undermining the state’s environmental and climate objectives.”

Of relevance to Davis, California is experiencing “a housing supply crisis” where housing demand is greatly outstripping supply.  “In 2018, California ranked 49th out of the 50 states in housing units per capita,” the legislature wrote.  “Consequently, existing housing in this state, especially in its largest cities, has become very expensive. Seven of the 10 most expensive real estate markets in the United States are in California…”

Moreover, “California needs an estimated 180,000 additional homes annually to keep up with population growth, and the Governor has called for 3.5 million new homes to be built over the next 7 years.”

Davis has its own housing crisis.  As noted in the preapplication, “in the twenty years from 2000 to 2020, the City of Davis grew by only 6,542 people: a 10.8% population increase.5 That is a growth rate of roughly one-half of one percent annually for twenty years.”

They add, “As a result of Davis’ inaction, we see large discrepancies between the City of Davis and the remainder of the region when it comes to the issues of housing affordability, age, diversity and opportunity.”

According to the submittals, the project is looking at between 551 and 788 units ranging from multi-family housing both for rent and sale to small lot detached and a small number of traditional detached single-family homes (between 67 and 89 units).

“The Project includes an array of housing types proposed at cumulative densities well above the Davis average,” the description reads. “The subdivision will include more than fifty-percent of units built as high-density multi-family housing, roughly one-third of the units will be medium density single-family/small lot detached housing, and just over ten-percent of units will be built as traditional single-family detached housing.”

The description adds, “The Project has been designed to offer the full gamut of housing options, taking into consideration those unit types identified in the City’s Regional Housing Needs Allocation (‘RHNA’), independent market demand analysis, and attempting to fill gaps in the existing supply that have been clearly articulated by City staff and Council.”

The for-sale small lot detached units may include townhomes, row homes, or small-lot detached units and “will provide a housing type and price point that is within reach for moderate income earners, first-time homebuyers, and an array of civil servants currently priced-out of the housing market in Davis.”

The description adds, “Compared to Davis’s RHNA, the Project offers a greater percentage of multi-family housing and homes designed for moderate income earners and less emphasis on traditional single-family homes.

“Thus, the balanced array of housing types and affordability levels offer individuals in the region who may be currently priced-out of the market an opportunity to live in Davis and contribute to the community.”