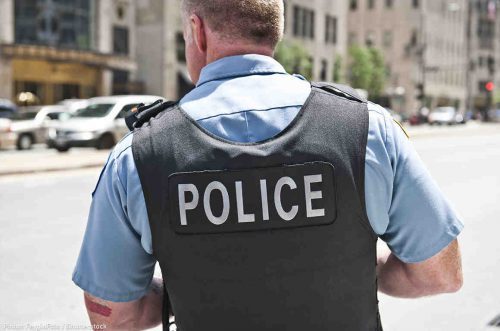 By The Vanguard Staff
CLEVELAND, OH – Cleveland employs new officers who couldn’t pass background checks with other police departments, according to a federal monitor, who called the Cleveland Police Dept. practices “disturbing” and “alarming,” according to a report from The Marshall Project, of a story published in partnership with Cleveland Scene, The Cleveland Observer and The Land this week.

According to the article, “The issues in the report mirror problems that surfaced in 2014 after an officer shot 12-year-old Tamir Rice. The department never investigated why that officer left a suburban force after a few months, Ideastream reported in 2014. A year later, the department was placed under a federal consent decree.”

The 75-page report, produced by lead federal monitor Hassan Aden, notes that the “department still lacks in key foundational areas such as accountability, community engagement and building trust,” and takes too long to complete internal investigation of its officers…(and) must make changes that hold officers accountable when misconduct allegations surface, said the article.

“There are significant and critical areas of the Consent Decree that remain in noncompliance,” Aden wrote, which was spawned in a consent decree between the U.S. Dept. of Justice and the local police dept. in 20 15.

The city spent more than $60 million on reforms since it entered the consent decree in 2015 and residents and elected leaders questioned whether the money has improved the department’s relationship with the public, said the article.

The article noted, “In 2017, the city fired Officer Timothy Loehmann, who fatally shot Tamir Rice in 2014, for lying on his application about being unfit to serve. The officer did not disclose why he left the Independence Police Department, according to a Cleveland.com story.”

The new federal monitor report “blasted the city for lacking ‘coordination and direction’ when it comes to recruiting and hiring new officers. Monitors examined background reviews of new hires and said the “reviews could have been better” and found many cases to be “cursory,” according to the article.

Monitors said they also found “veteran officers hired from other agencies should not have been hired because they had significant background issues. Most confounding in the reviews was the decision to extend an offer of employment to an individual when 12 of 13 members of the committee voted no upon considering that candidate,” Aden wrote in the semiannual report.

Some highlights from the federal monitor report include the following failures, quoting directly from the news article in the Cleveland Scene, The Cleveland Observer and The Land:

Conducting “objective, comprehensive and timely investigations of all internal allegations” or completing the investigations within 30 days from the date it learns of the alleged misconduct

During a review of eight internal investigations, monitors “identified substantive issues of concern in three” cases such as using leading questions and the quality of the findings

Monitors said in the report they are looking at complaints made by the Black Shield Police Association, an association of Black Cleveland police officers, including on made in January 2021, but although they were told the investigation was almost finished nine months later, they later learned the probe didn’t begin until 18 months later, in July of 2022.

“That is a significant delay that will not only impact the quality of the investigation, it also does not engender any reasonable belief on the part of the monitoring team that the city is capable of fairly adjudicating these complaints,” Aden wrote.

And, although the consent decree required the city to beef up its staff in the Office of Professional Standards, a civilian office that investigates complaints, the backlogs of case more than a year old had doubled and “is still unacceptably high,” the report said.

“Someone in the division must take responsibility for the accuracy of the website,” Aden said in his report. “It has become easier to find important documents on the website, but they remain organized in a way that suits the division and not the public.”