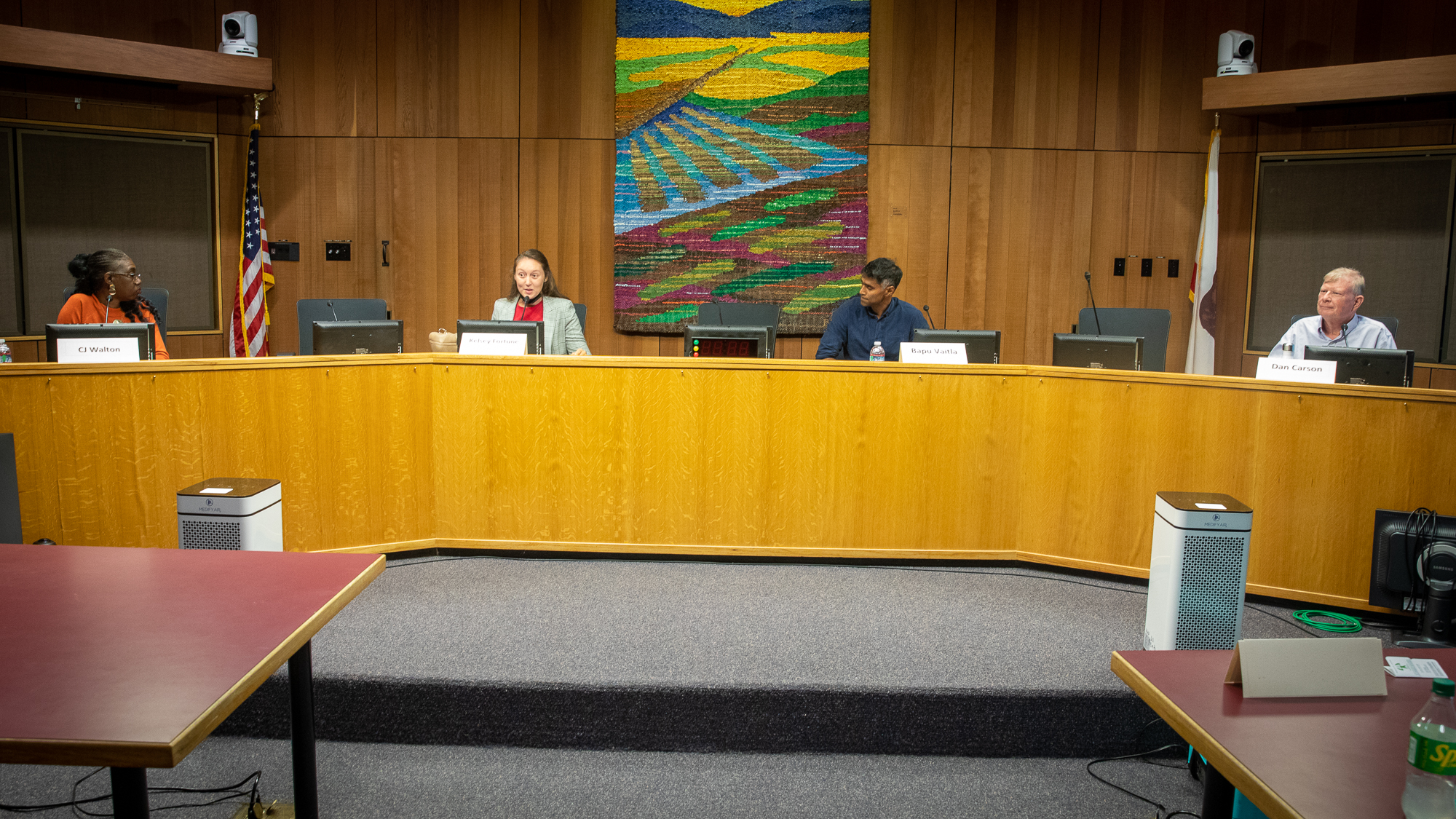 Davis, CA – Indivisible Yolo and Yolo People Power and DSA hosted a forum on Monday for the Davis City Council.  Moderating the forum for District 1 was CJ Watson.

Dan Carson is the incumbent and he is being challenged by Kelsey Fortune and Bapu Vaitla.

Question: what would you do in the future to ensure the city of Davis has a fair share of affordable housing? Please tell us your plans

Bapu Vaitla:  I’m a member of the Social Services Commission, was a chair, and I’m proud of the work that we’ve, we’ve done, but there’s a lot that remains to be done. Just to rattle off a quick list. We have a temporary affordable housing ordinance. It’s been temporary for five years.  That sunset date keeps getting pushed forward, and we need to have a strong and permanent affordable housing ordinance. And I’ll fight for the highest percentage of inclusionary units that economic analysis shows is feasible. Number two, we need to focus on dense, climate friendly, affordable transit linked infill in our

downtown. We can do that by, by density bonuses, by reducing parking minimums or eliminating them entirely. We can do them by providing incentives for folks who, who build the kind of development that our city’s values are rooted in. And finally the housing trust fund is a perfect means to do this. It’s the vehicle by which other cities in California have succeeded in building affordable housing and making sure there’s a minimum balance there every year is critical. And I would just say in terms of our vision overall, we need a general plan update. If we as a city do not say what the character of our city is as far as housing, what we want to see, then we won’t attract the kind of developers, nonprofit developers, affordable housing developers that fit that vision of equity and sustainability.

Dan Carson: I have acted and voted every chance I’ve gotten to provide both market rate housing and the affordable housing we need in this community. I campaigned for Bretton Woods, which besides the bungalow housing and the other units that are going in will with Mercy Housing provide 150 units of affordable housing, meaning federal and state income rules, for elderly and disabled persons. We are nearing completion of a new plan for our downtown that will add 1000 market rate and other types of units for about 2200 people over time. I voted to support funding and appropriate land use approval for Paul’s Place, for the respite center, for expansion of Yolo Crisis Nursery. I’ve submitted a white paper that was included in our housing element that’s now nearing final approval for a series of creative proposals to add housing, including, why can’t we have accessory dwelling units that are permanently affordable? Why can’t we use surplus land that D J U S D has to build market rate and affordable housing for teachers and faculty? Can we clarify, Measure J R D to make sure that 100% affordable housing can be approved without public vote, and we need to find new revenues to support our housing trust fund, And we’ve put a proposal on the table.

Kelsey Fortune: I absolutely agree that Davis and California’s, one of our top challenges is housing. I’m not sure if this question is talking about market rate affordable or specifically dedicated low income, affordable housing. But regardless of how much housing we build in Davis, there’ll always be a price premium on our market rate housing, because Davis is a place that people want to live.  Relative to our neighbors, there will always be that price premium on market rate housing, which why it makes it so much more important that we have this focus on our dedicated low income housing because we do not have the same ability to build in California in general, build enough housing to lower what market rate means.  Others have pointed out the, the downtown plan, which will, you know, create dense infill in our core, the core of our community which has been postponed. We had a downtown plan draft in 2019, and we just got an EIR. It’s things like this that are community focused and plans that need to be pushed forward by our council rather than focusing on peripheral projects. 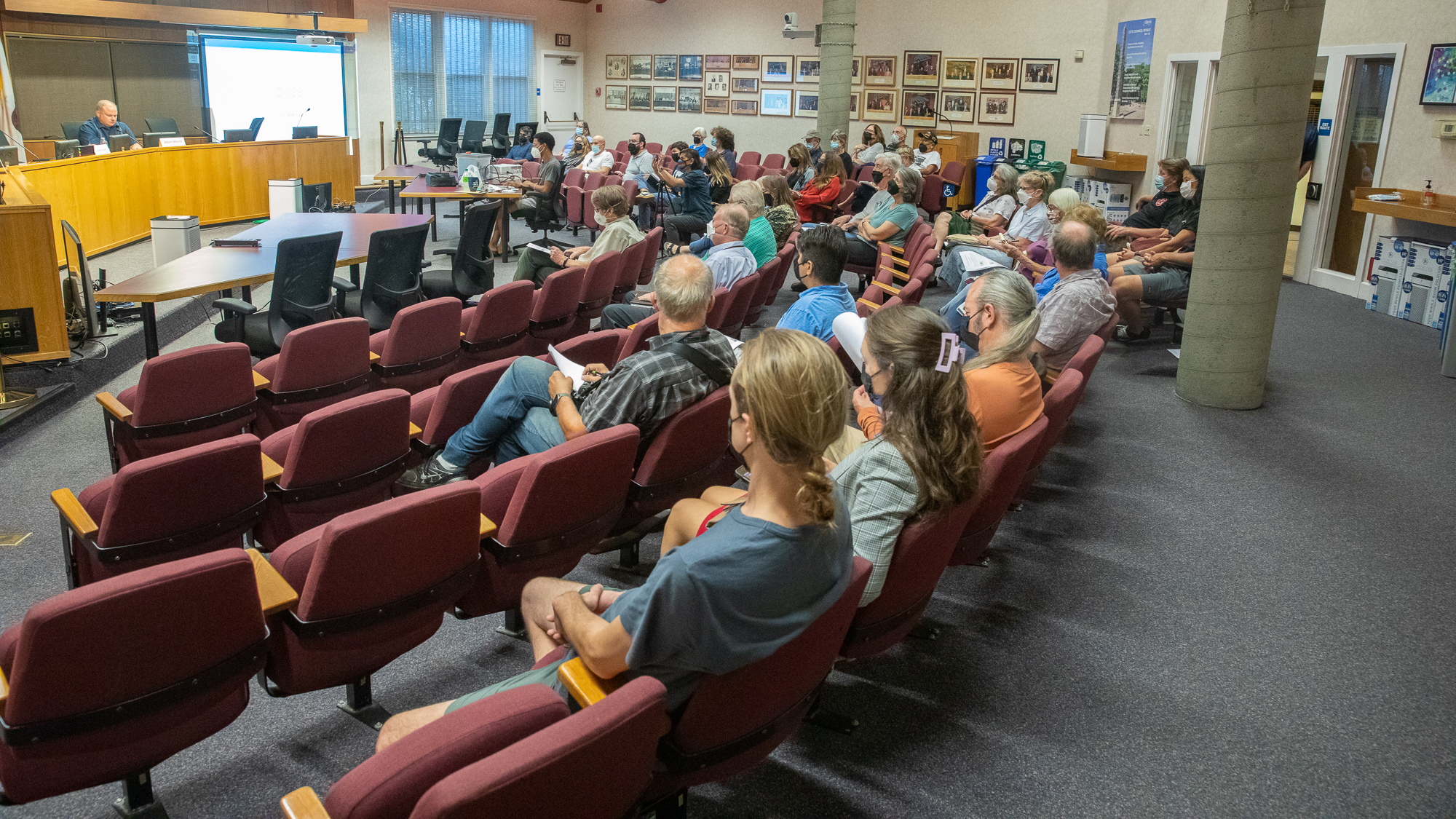 Question: in the affordable housing elements in Davis, some recent and upcoming projects. Can you talk about whether or not you find them adequate? If you say they are inadequate, then talk about what would adequate look like? What specific differences would you like to see on the projects going forward?

Dan Carson: It’s hard to build housing in Davis. We have high cost of land construction costs have been soaring, especially of late. We have a lot of requirements that other communities don’t have for more extensive energy efficiency requirements that hold down cost for future residents, but make the front end cost of building stuff more expensive. We can do things like holding our own parking costs. We’re going to have parking maximums in our downtown. We can go for density that helps carry these costs. But even after doing all of that, most of these studies that have been done, and one that’s underway right now, tend to show that you can probably somewhere below 15% inclusionary requirements provide low income housing. But if you want to provide very low and extremely low income, at some point you need government money to help subsidize it. It just is very hard to get there unless you have a very large scale project. I have a proposal that we allow Measure j r d to be waived for affordable projects that would create land dedication sites, which we are out of, and then go after the abundance of federal and state tax credits and federal and state grand funding that is available to build this stuff. Bretton Woods is our last land dedication site. This is a formula for making progress.

Kelsey Fortune: On this list is first the University Mall, which unfortunately has no housing anymore in their plan. That is highly unfortunate as it is a good site for potential dense infill. One of the other projects listed here, DISC 2022, did offer some low and very low income units. However, it was primarily a business park. And when you’re talking about 80 or so affordable units and thousands of employees, you’re only making our housing market worse. Lincoln 40, I think is a great example of a time when the community was not heard. There were many community members who were vocal about the idea of affordable beds, which is how Lincoln 40 was going to meet their requirement. And unfortunately, it doesn’t meet the requirements of the regional housing needs assessment that we are required to meet.

Bapu Vaitla: UMall is now no more housing. That’s not acceptable. Child’s 3820 is great for workforce housing, but it doesn’t actually construct affordable units. It does have an innovative in lieu fee model where 1.65% of rents go to the city. That brings us more money than typical in lieu fees. But again, no units. Lincoln 40 by the bed model, like Kelsey mentioned, that’s just unacceptable for affordable housing. Disc was going to create 84 affordable units. Some with deep affordability vary in extremely low units. It was going to be one of the highest numbers that we’ve seen in recent years, but we know it had a lot of other flaws. The downtown plan, as Dan mentioned, does zone for quite a few affordable units potentially, but we’ll have to see how that shakes out. So far. We have a plan, but developers, et cetera, the whole process that leads to affordable units will be years in the making.  So we need some changes I mentioned before, a permanent affordable housing ordinance that has a reasonable inclusionary percentage. One that’s not so high that it’s going to stop construction entirely but one that’s significant, but also to, to leverage these state and federal tax credits, the grant dollars to set us on a runway for creating all affordable projects, non-profit developments like Davis has done in the past, that’s still possible. The big thing though, is having a general plan update that sets the character our vision for housing in the city. So we attract those kind of developers. 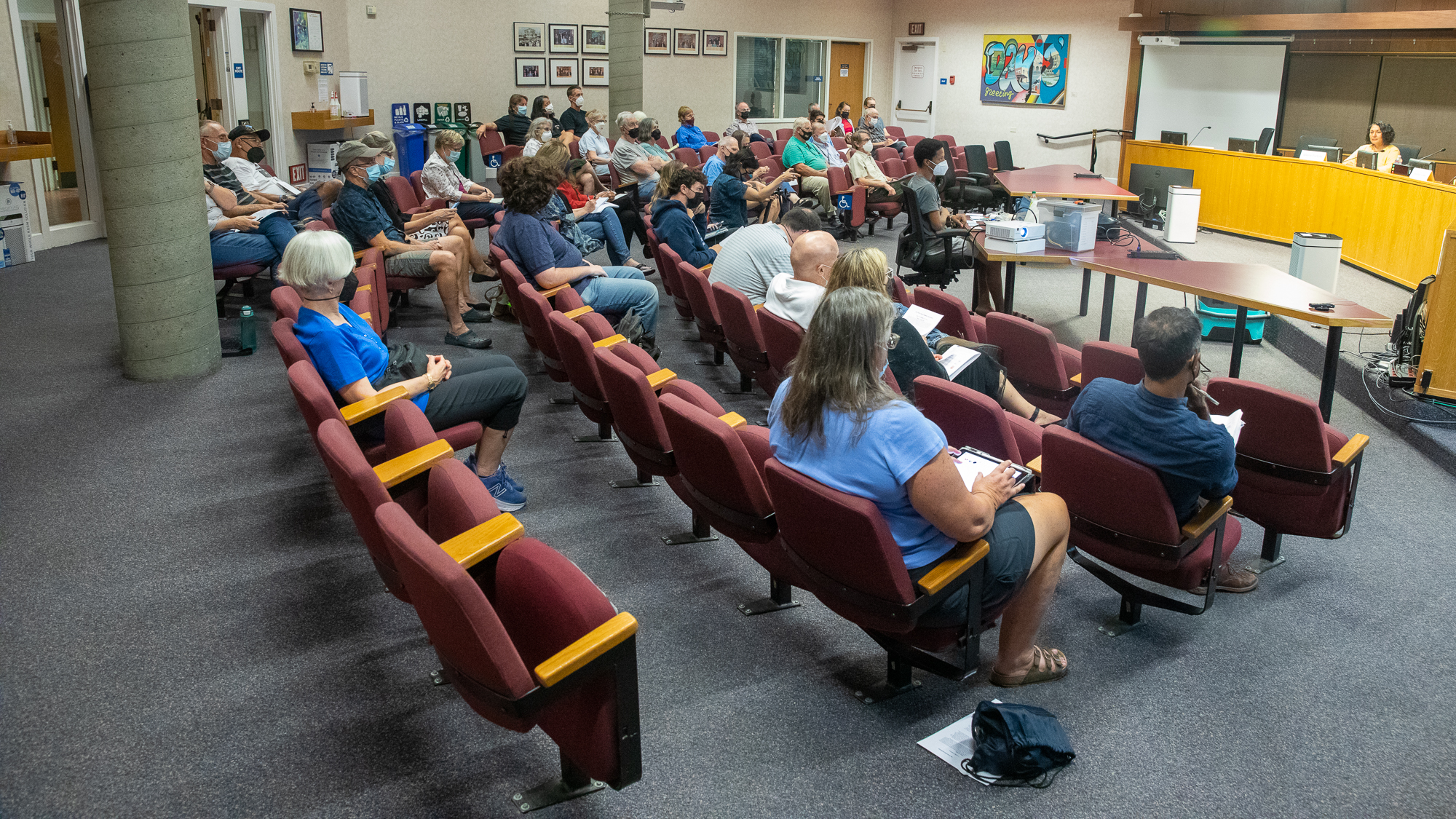 Dan Carson: So we just lived through Covid and during Covid we lost our student population virtually, entirely.  When they were gone and when the faculty supporting those students were gone, we had about a dozen restaurants in our downtown close. Immediately we were terrified about a domino effect of maybe losing our downtown forever. When they came back, what a renaissance we had, even before renaissance was tamed with their vaccinations. Those students really mattered this community. So we should be thinking about how we can help house them. I’m so delighted that we convinced our campus to add 6,200 student beds, mostly on campus while our city has helped too.

Bapu Vaitla: The answer to CJ is we fight like hell as city council members and tell the public, you know, look what it meant to be an environmentalist in the eighties was to say no growth was to say, not in my backyard. That’s what it meant. That’s no longer what it means to be an environmentalist. To be an environmentalist right now is to build dense, infill, affordable transit linked climate friendly housing. That’s the way we reduce per capita emissions. And that’s how we include folks who are low income folks of other colors into our community. And we have been exclusionary. We just need to admit that, Let me just say bluntly, that, that Yolo County is segregated, it’s segregated. That’s what it is. Racially in class, segregated by class. We don’t want to be those towns that, that were remembered in history as being segregationist. We want to be ahead of the curve in integrating our town, our county.

Kelsey Fortune:  if we’re talking about engaging the community in building housing, I think it’s really important that we engage our community in the planning process that actually creates that housing.  Creates the plan for that housing. That’s the issue that we have had in our community right now, is that we don’t have a plan. And so the community is not, there’s no vision coming from our community members for the city to follow. And that’s how you get to where you want to be, is you plan, We know we need more housing. How are we going to build it? Will we tell the community, Hey, we need a plan that builds more housing and they tell us how we do it.