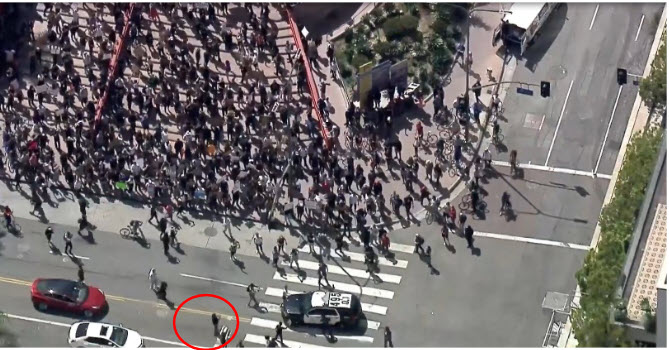 Los Angeles, CA – A federal judge declined to grant summary judgment in a lawsuit accusing the LAPD of violating a peaceful protester’s civil rights by ramming her with an SUV.  U.S. District Judge Cormac Carney’s Sept. 19 order denying LAPD’s bid for summary judgment clears the way for a jury to hear the case.

The case arises from a George Floyd protest in May 2020, just days after Floyd’s killing

at the hands of Derek Chauvin.  In Los Angeles, enormous crowds of protesters gathered to protest.

On May 31, 2020, Officer Illsley was driving an LAPD patrol vehicle in Downtown Los Angeles with his training officer, Officer Hernandez, riding in the front passenger seat.  They were responding to a burglary call when they encountered a peaceful protest that was obstructing a portion of the intersection.

When the light turned green, there were still protestors in the crosswalk, with “easily over 100 people in the vicinity.” 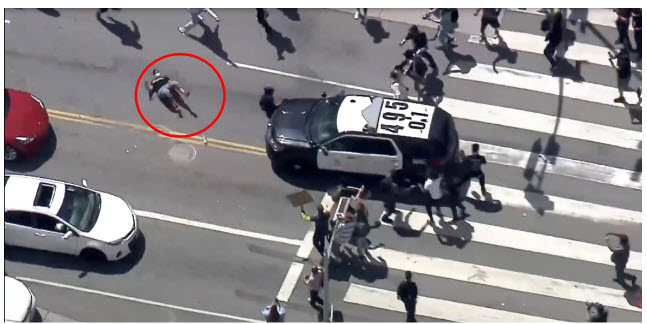 Officer Illsley drove into the intersection, chirped the siren and activated the lights.  As he did so, a woman walked in front of the car, stopped directly in front of it, turned to face the officers, and raised her middle fingers.

Hernandez gestured to the woman to get out of the way, but she refused.  Officer Illsley continued driving forward until he made contact with the woman, bumping her torso with the front of the car.  The woman stumbled but remained standing—middle finger raised.

At this point, the plaintiff, Brooke Fortson, was filming an Instagram video.

Then Officer Hernandez “began repeatedly instructing Officer Illsley to “rev it,” the judge wrote.  With the woman who had raised her middle finger out of the way, Officer Illsley accelerated forward and struck Fortson.  “The impact caused Plaintiff to fly backwards, landing approximately twelve feet away.

“Here, the evidence viewed in the light most favorable to Plaintiff could support a finding of excessive force,” the judge wrote in a 23-page order.  “Officer Illsley, at Officer Hernandez’s urging, drove a car into an intersection when people were still in it. He did not turn on his lights or sirens, order the protestors to disperse over the car’s loudspeaker, drive forward more slowly, or reverse or turn out of the intersection.”

The judge added, “When watching the overhead footage, a juror could view Officer Illsley’s acceleration as unnecessarily fast and dangerous, especially since Plaintiff was not engaging in any criminal activity or posing any immediate threat or danger to the officers’ safety.”

7️⃣0️⃣ Los Angeles, CA: LAPD officer quickly drives his SUV into a crowd near Pershing Square, hitting what looks like two protestors, then throws it in reverse and speeds away pic.twitter.com/l5tlBjIHid

“Officer (Nicholas) Illsley, at Officer (Jovanna) Hernandez’s urging, drove a car into an intersection when people were still in it,” Carney wrote. “He did not turn on his lights or sirens, order the protestors to disperse over the car’s loudspeaker, drive forward more slowly, or reverse or turn out of the intersection.”

The judge added, “When watching the overhead footage, a juror could view Officer Illsley’s acceleration as unnecessarily fast and dangerous, especially since Plaintiff was not engaging in any criminal activity or posing any immediate threat or danger to the officers.”

Civil Rights Attorney, V. James DeSimone, who is representing Fortson, told the Vanguard that while she had no broken bones, and “lived to tell the story” she “feels very betrayed and emotionally upset by all of this because… ‘I specifically went to this peaceful protest.’

“I think what gets lost sometimes, we have the First Amendment right to peacefully assemble,” DeSimone explained.  “Our police forces should not be violent towards people who are exercising those rights, unless those individuals are doing something violent themselves.”

Instead of taking responsibility, DeSimone said that Chief Moore came out afterwards, “and he doubles down.”  He explained, “There’s video of him on TV saying how these officers, recounting some of what happened in other protests, these officers were in fear for their lives.”

He added, “The city attorneys for the city of Los Angeles ran with all of this and they filed the motion for summary judgment.”

DeSimone noted that this was denied on Monday.

He said, “The opinion’s really good.  It really shows how these officers claim that there was all this violence, but the video shows otherwise.”

The judge also noted that after the LAPD vehicle hit her, “it accelerated backwards at a high rate of speed, amazingly not hitting anyone doing that.”

In fact, there was no violence here until the police acted with a use of force and instigated further escalation of what had been a peaceful protest.

The judge notes, “Defendants argue that summary judgment is appropriate because Plaintiff was not ‘seized’ for Fourth Amendment purposes because the Officer Defendants did not intend to hit her, and thus they “did not intentionally acquire physical control over her.””

But, according to case law, when a show of police authority “includes the application of physical force, a seizure has occurred.”

Further the judge notes, “Whether the Officer Defendants’ use of force was reasonable under the circumstances is likewise a question of fact that a jury will have to decide.”

James DeSimone said he’s eager to bring this case to a jury. “Instead of accepting responsibility for its reckless conduct which injured Brooke Fortson, who was peacefully exercising her First Amendment rights, the LAPD doubled down on its misconduct by trying to have the case kicked out of court,” DeSimone said. “We are grateful that the court rejected this attempt and emphasized that this is a case that a jury will have to decide.”

DeSimone added: “We are confident that a jury will recognize that it was completely unreasonable for the LAPD officers to rapidly accelerate the police vehicle towards innocent people who had no reason to expect they would do so. As Judge Carney noted, ‘Defendants claim that Officer Illsley accelerated forward rapidly because protestors were attacking the car, but the video footage does not show any violent behavior by the protestors before the car hit Plaintiff.’”

Fortson said she’s ready for her day in court. “I am thankful that we achieved this next step towards justice and I am hopeful that ultimate justice can be achieved through the legal process,” she said.

Share:
Tags:Black Lives MatterCivil Rights SuitGeorge FloydLAPDPolice AssaultProtest
Previous : Man Chased by Armed Merced Police Officer in Own Yard
Next : Commentary: Governor Gives Us the CARE Act When What We Need Is Housing for the Homeless