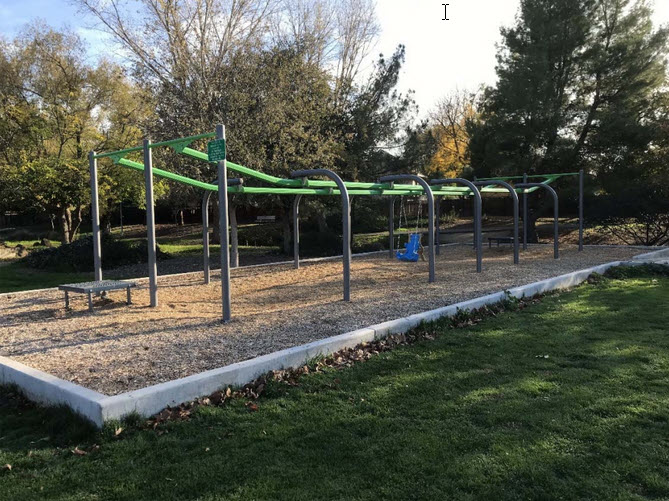 by Janet and Joe Krovoza

By now pretty much everyone following city matters knows of the public follies of the Arroyo Park Sky Track.

That it was installed in Arroyo Park in May 2019, steps from neighbors’ homes, with no public demand, no notice and no Rec and Park Commission review; that the city was forced to restrict hours of use and lock and unlock it daily (using city firefighters at first) to prevent nighttime use, when the Sky Track’s abrasive banging and scraping were especially disruptive (but which led to repeat vandalism); that a noise report commissioned later that summer was doctored to show the city’s noise limits as “averages” not “maximums” but never retracted; that, out of the blue, on the eve of Memorial Day weekend 2021, staff asked city council to overhaul the city’s noise regulations so that the Sky Track would comply with the new standards (ignominiously removing the request from the agenda four days later due to community outcry); that the city ordered a subsequent noise study that showed the Sky Track had been breaking both night and day noise limits since its installation (this study, too, deliberately misrepresenting the municipal code); and that the city has, at the urging of its paid consultants – sound engineers, not lawyers – reinterpreted the noise ordinance (recall they failed in May 2021 to legitimately amend it) to justify the Sky Track remaining in Arroyo Park.

What hasn’t been explained is the full backstory of how we got into this unnecessarily mess. We think everyone deserves to know. As you read this, bear in mind that city manager Mike Webb and then-council member and now-Mayor Lucas Frerichs were presented with what’s below, in writing, in September 2020. And then we discussed it with them via Zoom. Regardless of what’s below, the City remains determined to stick the Sky Track somewhere, anywhere in Arroyo Park.

The Sky Track is a product of GameTime and championed by its exclusive Northern California representative, MRC Recreation. After reviewing the public record, it is clear that Dale Sumersille, then Park and Community Services Director, and Kelly Oakes, the GameTime/MRC representative, have enjoyed a close and non-professional friendship (“…had a blast at the conference with you ” “I really enjoyed hanging out with you guys:-)”) dating to at least March 2018. Such interaction might be fine, but here it’s important to understand the consequences for city fiscal responsibility. Since the comments revealed in the public record, MRC has contracted with the city on numerous other projects worth hundreds of thousands of dollars. When the deck is stacked in favor of that company, public trust is eroded and the appearance – and likelihood – of impropriety is heightened. That is exactly what is happening here.

On September 4, 2018, Sumersille submitted an application for a “matching grant” (really a discount, part of which wasn’t even claimed by the city) from GameTime, disclosing she was “working with local rep to order each init (sic, likely “unit”) for each location specific” and including the language: “**Special request to place a long zip/sky track between both play areas.”

While already well along in ordering the GameTime equipment, two days later, on September 6, Sumersille met with eight playground equipment companies, including GameTime, whom she had invited to City Hall to present bids for park renovations, including in Arroyo Park. Little did the other vendors know that the park and community services director had already been in discussion with the GameTime rep and was already in the process of ordering specific GameTime equipment. On September 20, Sumersille notified the vendors of the staff recommendation “to go with GameTime.”

However, when appearing before the city council on October 30, 2018, Sumersille requested approval of a sole source contract without any accompanying findings that would justify such a request and no evidence that any formal bidding process had been adhered to, e.g., public disclosure of bids. The staff report recommending that the city council approve the sole source purchase of equipment from GameTime does not even mention that seven other equipment companies had also submitted bids and made presentations the month before. Why is that? If there had been a legitimate bidding process, Sumersille would certainly have touted that to our city council. Sole source is only allowed for purchases with taxpayer dollars when there are special circumstances. No findings, as required for a sole source contract, were in the October staff report to city council.

Sumersille also gave the council the impression that the $185K equipment procurement needed to be approved that night as the deadline to qualify for the GameTime “grant” was the very next day, October 31. That’s not a reason for sole source, there was no “grant,” and since when is a third-party deadline reason for a rushed city decision? And in the rush, there was no time to follow the community notice guidelines or to run the issue by the Rec and Park Commission.

Also on October 30, Sumersille wrote to Oakes after the city council vote: “Martin [Jones] or I will need to talk to you about the installation portion of the quotes next. I know we briefly spoke about it last week. Please call Martin or myself to further explain. Thanks!” Nothing in the October 30 staff report mentioned installation costs or sought approval for installation costs, or provided a sole source bid exception for installation. The only mention was of “incidental installation,” and thus of little or no cost to the city. In fact, invoices in the possession of city staff that night included installation costs in excess of $100K for park installations including Arroyo Park.

On November 28, Sumersille wrote Oakes and asked her to revise GameTime’s quotations, “so that we don’t have to go out to bid.” She added that Martin “will meet with you to discuss on how we need to have you revise the quotes.”

That Sumersille does not specify in the email what she wants Jones to tell Oakes gives the clear impression that she, Jones and Oakes are collaborating on something they prefer not to document in writing.

It is against state laws for a city official to conspire with an outside vendor to change a bid to avoid a competitive bid process. Expenditures of $50,000 or more require a competitive bid. The original quote for installation at Arroyo Park was $60,547. After Oakes spoke to Jones, the installation quote, without explanation, dropped to $44,900. The contract for installation went to Recreation Project Services, owned by Thomas Oakes, Kelly Oakes’ husband.

The city now estimates the cost of moving and reinstalling the Sky Track to Location B will be, in a lucky coincidence, just below $50,000: $49,900. The company designated by staff for this work is again Recreation Project Services.

Staff clearly feels above state law and local ordinances. There is also staff contempt for the council itself. One display of staff’s disrespect for the council was when Sumersille signed the GameTime quotes on behalf of the city well before the October 30th meeting, but post-dated them for October 30, the date the city council would consider the purchase. In her cover email with the signed bids, Sumersille tells Oakes, “I’ll contact you after the City Council meeting next week informing you to proceed.” If postdating documents by staff isn’t illegal, it certainly should be. At a minimum, postdating documents disrespects city council authority.

In the end, council approved equipment purchases of $185K for three sites (Manor, North Davis Greenbelt, Arroyo) at the October 30 meeting. Adding up the invoice numbers, and removing the “grant” discounts and even the installation costs, the equipment total was approximately $221K. By any measure, staff spent more on equipment than the council approved.

Why did we need new play equipment for Arroyo Park? The city said the Arroyo Park structures were over 20 years old; in fact, they were maybe 12 years old, at most (aerial photos from 2006 show just a few of the pieces installed). In 2018, none of it was in noticeably bad shape; the city certainly didn’t document that. Replacing all of the existing Arroyo play structures and adding the Sky Track where there had been open space and native oaks was a “solution” without a problem. We are pleased to acknowledge that the city has said they “canvased” park users to determine their interests before the 2018 approval, but the city can’t, or won’t, produce a single document, or say who did this work, to explain this canvassing process further or to show any results. And in any event, whatever “canvassing” is, it’s not mentioned in the city’s explicit “Noticing Guidelines and Standards for Impacts to Parks and Greenbelts” that were in effect in 2018, were long before that, and that still are today.

The cost saga isn’t over. Now approved for relocation in Arroyo Park, the Sky Track will assuredly need to be locked at night at an annual incremental staff cost (not including management time) of between $10K and $15K per year. No other park receives funding to manage a single play structure on a daily basis.

There you have it. This is how our city staff and council operate. This is how the nuisance imposed on neighbors by the largest and loudest piece of park play equipment in the city – and one that has cost us thousands of staff hours and will cost thousands per year to lock/unlock – came to be.