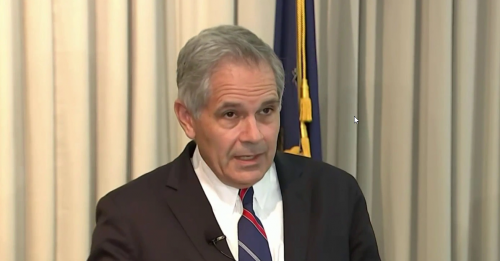 PHILADELPHIA. PA – District Attorney Larry Krasner Monday released a terse statement about a PA House “GOP-led” effort to remove him from office, charging he is being “targeted by the Select Committee over policies and politics, which has never before happened in the storied history of this Commonwealth.”

Noting his office met Monday with members of the Philadelphia Delegation of the Pennsylvania House of Representatives to “fully explain our responses to the PA House GOP-led impeachment effort,” he said, “I have now stated my position on the PA GOP impeachment effort directly to the Select Committee, including through a lawsuit filed in court.

“The Select Committee was convened for the express purpose of overturning an election that Pennsylvania Republicans could not win. I am not accused of official or criminal misconduct—unlike several other county DAs in Pennsylvania in recent years—yet my office is being targeted by the Select Committee over policies and politics, which has never before happened in the storied history of this Commonwealth,” Krasner said.

“I also explained to the Philly Delegation that my office did not ‘ignore’ the Select Committee’s subpoenas; in fact, we filed a detailed response to the Committee’s subpoenas outlining our legal objections to subpoenaing grand jury materials related to a pending murder trial. And again, we had at the time of the contempt vote already filed a petition seeking clarity on the subpoenas in the Commonwealth Court of Pennsylvania, which is the appropriate venue for this legal dispute to be settled as outlined by the Pennsylvania Supreme Court,” he added.

Krasner said he was “eager to move forward with a united effort to protect democracy in Philadelphia and Pennsylvania, and fight a bad faith, unconstitutional attempt to overturn the 2021 election over my office’s policies of evenly applied and equal accountability for all who criminally cause harm to our communities.

“I continue to stand with the Philly Delegation’s leadership as they fight relentlessly to pass gun safety laws, which the House GOP majority never even allow to get to a floor vote; as well as for the investments in public education, public health, and community safety that all counties in the Commonwealth need and deserve,” he added.

Krasner also implored lawmakers to hold hearings this week at “a location that is actually accessible to Philadelphia voters and to allow me, the target of their inquiry, the opportunity to speak and answer their questions in public.”