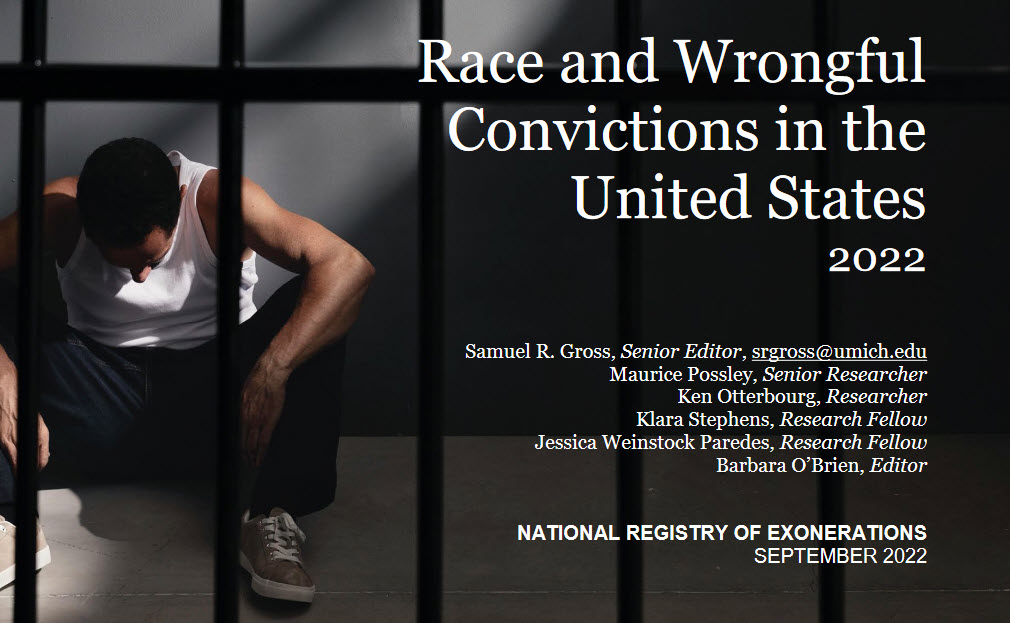 The National Registry of Exonerations, as of August 8, had identified more than 3200 individual exonerations.  The report found that, while Blacks are 13.6 percent of the American population, they represented more than half (53 percent) of those 3200 exonerations.

This racial disparity held for all major crime categories, with the exception of white-collar crime.

The report focuses on racial disparities in the three types of crime that produce the largest numbers of exonerations: murder, sexual assault, and drug crimes.

The report found, “For both murder and sexual assault, there are preliminary

investigative issues that increase the number of innocent Black suspects: for murder, the high homicide rate in the Black community; for rape, the difficulty of cross-racial eyewitness identification. For both crimes, misconduct, discrimination and racism amplify these initial racial discrepancies.”

For drug crimes, “the preliminary sorting that increases the number of convictions of innocent Black suspects is racial profiling. In addition, the Registry lists 17 ‘Group Exonerations” including 2,975 additional wrongfully convicted defendants, many of whom were deliberately framed and convicted of fabricated drug crimes in large-scale police scandals.”

Once again, “The overwhelming majority are Black.”

In a letter dated September 23, they note, “This is the first Report by the Registry that includes extensive discussion of changes over time. That required patience. Many, probably most, of the important changes are in the investigations and prosecutions that produce false convictions—but we don’t begin to learn about them until the convicted defendants are exonerated, on average 11.6 years later.”

They write, “We’re now able to describe and analyze changes that occurred in the twenty-first century.”

They found that many innocent Black men had been misidentified by white victims, but with the advent of DNA pre-trial testing, that “has now reduced that problem to a fraction of what it once was.”

In addition, “We know far more about false drug crime convictions than we did five years ago. We have two-and-a-half-times as many exonerations (554 vs. 221), including 259 drug crime exonerees, overwhelmingly Black people, who were framed by police.”

Misconduct, they found, is a huge component of wrongful convictions of drug crimes.

For murder, “Innocent Black people are about seven-and-a-half times more likely to be convicted of murder than innocent white people. That applies equally to those who are sentenced to death and those who are not.”

The report found that a major cause of this disparity is “the high homicide rate in the Black community, a tragedy that kills many Black people and sends many others to prison.

“Like the families of those who are killed, innocent defendants who are falsely convicted are victims who are deeply harmed by murders committed by others,” the authors find.

In addition, “Black people who are convicted of murder are about 80% more likely to be innocent than other convicted murderers.”

Again, they find, “Part of that disparity is tied to the race of the victims. About 13% of murders by Black people have white victims, but twice as many—26% of innocent Black murder exonerees—were convicted of killing white people.”

Finally, “The convictions that led to murder exonerations with Black defendants were almost 50% more likely to include misconduct by police officers than those with white defendants.”

For sexual assault they find the disparity even higher: “Innocent Black people are almost eight times more likely than white people to be falsely convicted of rape.”

Furthermore, the study found, “A prisoner serving time for sexual assault is more than three times more likely to be innocent if he is Black than if he is white.”

The major cause of this huge racial disparity, the researchers found, “is the high danger of misidentification of Black suspects by white victims of violent crimes.”

Despite the longstanding racial tropes, “Assaults on white women by Black men are a small minority of all sexual assaults in the United States, but nearly half of sexual assaults with eyewitness misidentifications that led to exoneration.”

The report found that eyewitness misidentifications do not completely explain the racial disparity in rape exonerations.

“A substantial number of the convictions that led to rape exonerations of Black defendants were marred by implicit biases, racially tainted official misconduct and, in some cases, explicit racism,” the report continued.  “Black sexual assault exonerees received much longer prison sentences than white sexual assault exonerees, and spent, on average, more than four years longer in prison before exoneration.”

As noted, exonerations of misidentified rape defendants are much less common than they used to be. “There have been only two from rape convictions in the last 12 years. That’s because DNA testing is now routinely used to determine the identity of rapists before trial. This technology has prevented convictions of hundreds or thousands of innocent rape suspects, mostly Black men who were accused of raping white women,” the report added.

Finally, 69 percent of drug crime exonerees are Black while 16 percent are white.

“That means that innocent Black people are 19 times more likely to be convicted of drug crimes than innocent whites—a much larger disparity than we see for murder and rape—despite the fact that white and Black Americans use illegal drugs at similar rates,” the report found.

This is due to bias policing where police choose “who to pursue for drug offenses” and “they choose to stop, search and arrest Black people several times more often than whites. That’s racial profiling. One of its deplorable consequences is drug crime convictions of innocent Black defendants,” the report found.

The result is that “almost all the erroneous drug convictions we know about are in a single cluster in Harris County, Texas (Houston), where a unique practice of testing alleged drugs after defendants pled guilty led to 157 exonerations; 62% of the exonerees are Black in a county with 20% Black residents.”

These convictions are errors, they add.  But they are mostly caused by defective field drug tests and thus they found “most are not innocent errors.”

The researchers note, “Most Black exonerees were stopped and searched—and subjected to the risk of these errors—because of their race.”

In addition, “We also know of dozens of groups of innocent defendants who were deliberately framed by police officers who planted drugs on them. Almost all are Black people or other racial or ethnic minorities. So far, we list 259 individual exonerees who were convicted of these fabricated drug crimes, primarily in three group exonerations; 87% of them are Black.”

The researchers add, “Of the many costs that the war on drugs inflicts on the Black community, the practice of deliberately charging innocent defendants with fabricated crimes may be the most shameful.”