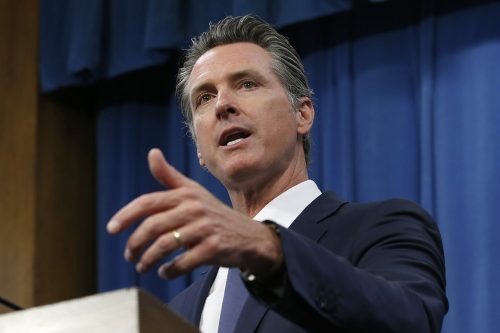 “This weekend’s public display of anti-Semitic hate is another wake-up call to all of us that we must remain vigilant to protect our values and freedoms as Californians,” said Newsom, adding, “The former President gave a platform to extremists spewing hate speech and we continue to see the dangerous consequences—from the insurrection on January 6 to Nazi salutes and anti-Jewish signs over the 405 freeway here in California.

The governor continued, “Our state is committed to protecting our diverse communities and will continue to lead the fight against racial, ethnic, and religious hate wherever it rears its ugly head.”

In part, the statement was in response to Kanye West’s public display of anti-Semitism on social media, followed by a banner hung over the 405 freeway in Los Angeles stating, “Kanye is right about the Jews” and anti-Semitic flyers being posted in Jewish neighborhoods around Los Angeles.

Gov. Newsom and the legislature have provided over $150 million to support anti-hate programs that directly support victims and their communities, the governor noted.

An additional $165 million, he added, was allocated for the State Nonprofit Security Grant Program, dedicated to help nonprofit organizations targeted by hate-motivated violence by improving security at their facilities. Last month, Newsom signed legislation to extend this program, codified into law in 2019 following the shooting at Chabad of Poway.

Newsom launched the Governor’s Council on Holocaust and Genocide Education in 2021, with the goal of identifying resources to teach students in California about the Holocaust and other genocidal acts and providing them with resources to recognize and respond to anti-Semitism and hate on-campus.

He also signed an executive order stipulating the launch of a California versus Hate Resource Line and Network to help protect communities against hate violence and discrimination.

Last month, the governor made appointments to the Commission on the State of Hate, created last year after signing legislation meant to track hate crimes, develop anti-hate resources, and make better recommendations to protect civil rights.

Leila Katibah is an undergraduate student at the University of California, Santa Barbara. She is double majoring in Sociology and Middle East Studies with a minor in Professional Writing. After graduating, Leila plans to attend law school to pursue a career in Public International Law.