Davis, CA – While we have not received concession statements from the candidates, the writing is now very clearly on the wall.  The lead for both Bapu Vaitla and Gloria Partida not only held up, but it numerically expanded with the latest drop.

While there are probably another 1000 to 1500 ballots remaining to be counted, it’s a mathematic improbability, even a potential impossibility, in the case of District 1 that the results will change.

According to the election’s office release on Tuesday, “The ballots in this update include many, but not all, of the Vote by Mail ballots received through Election Day by the US Postal Service or returned in person at a Ballot Drop Box or Vote Center. Please note, election results are not final until the election is certified. All results posted until certification are unofficial results.”

“We prioritize the timely processing, verifying, and counting of outstanding ballots during the canvass,” said Jesse Salinas. “Great progress has been made and we expect to certify the election the week following Thanksgiving.” 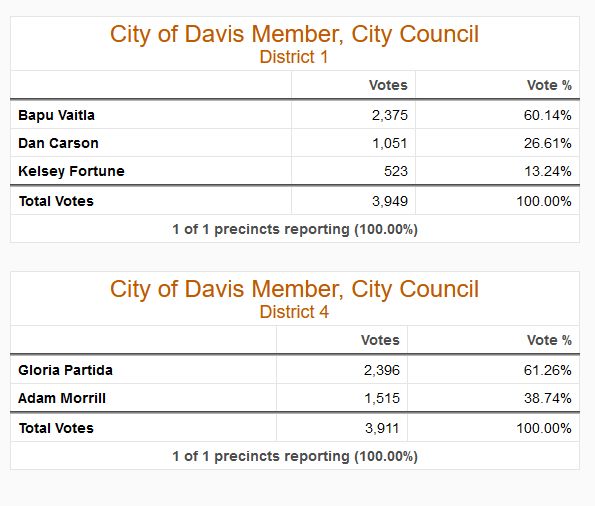 The next unofficial election update will be Friday, November 18 by 5:00 p.m.

Interestingly enough, the numbers in District 1 and 4 are remarkably similar.  The total ballots counted so far are 3949 for District 1 versus 3911 for District 4.  The two leading candidates have almost the same number of votes.  Gloria Partida has 2396 to 2375 for Vaitla.

Adam Morrill trails by nearly 900 votes with 1515.  Dan Carson, the incumbent, trails by over 1300 votes.  But remarkably he and Kelsey Fortune have a total of 1574 votes, remarkably similar again to Morrill’s total.

Based on previous drops it appears there should be probably another 1000 to 1500 votes to count.

If it’s 1500, while mathematically possible in the Vaitla race, in neither race is it very plausible.

In other words, this is over.

Share:
Tags:Bapu VaitlaDan CarsonDavis City CouncilElection 2022Gloria Partida
Previous : Guest Commentary: Reform – Not Crime – Was the Winning Message in 2022
Next : Senator Wiener Discusses Housing Concerns, and What Is Next