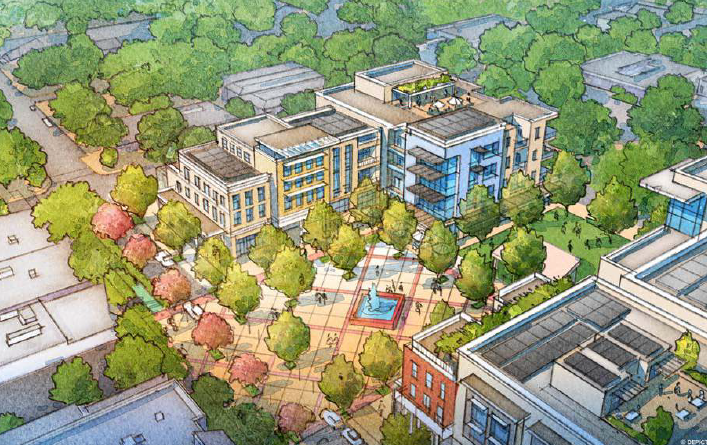 Davis, CA – Next Tuesday, the Downtown Specific Plan will go back to the Planning Commission as the process finally is moving forward again after a lengthy pause during the pandemic.

The city is counting on the ability of mixed-use housing to be able to prop up and reinvigorate the downtown which has seen a general decline, particularly in the retail sector, in recent years.

More than that, the city is counting on the Downtown to fill critical housing needs, both market rate and low income.

Given a dwindling supply of vacant infill land in the city along with the continued unpredictability of peripheral development, the Downtown Plan’s 1000 or so market rate units is a vital source for infill in the coming housing cycle.

But should it be?

Back in August, we questioned the city’s reliance on 83 units of low or very low-income housing in the downtown.  Fifty-three of those low-income units are in a redevelopment of the E St. Plaza, 17 would be along Second and G, and 13 along Fourth St.—all of those are redevelopment sites.

As we pointed out, in 2018 Bay Area Economics (BAE) ran a proforma that should caution us against expectations that housing in the downtown is going to be feasible.

BAE concludes: “These results indicate that under current conditions, it will be very difficult for developers to undertake projects similar to the prototype projects, with a few exceptions. As mentioned previously, it appears that a medium-sized mixed-use project

They added that “development feasibility in Downtown Davis is challenging under current conditions.”

If anything, those current conditions are worse now than in 2018.

To understand the difficulty here, look no further than Davis Commons.  The original plan drew heavy criticism from neighbors and slow growth advocates because of its sheer size and scale.

The proposal called for the demolition of the majority of the existing University Mall building for redevelopment as a dense, mixed-use project.

The project included 264 new multi-family residential units and around 136,000 square feet of retail space—about 50 percent larger than the existing commercial footprint.  This does not include the separate 13,000-foot Trader Joe’s building which will remain untouched.

There would also be a three-level parking structure containing 533 parking spaces and which would be situated on the west portion of the site, with an additional 160 surface parking spaces.

But with a strong push back from neighbors and a split council, it was ultimately approved in a modified form. Ultimately, in August 2020, then-Councilmember Brett Lee proposed a five-story modified proposal that got a bare majority of three votes, over the opposition of Will Arnold and Lucas Frerichs.

But the developers couldn’t make the compromise work.

So two years later, the project having not broken ground, Brixmor announced that it was going forward with no residential component, renamed as the Davis Collection.

At least on the surface that might spell trouble for any real prospect of housing in the downtown—particularly any possible affordable housing component.

Brixmor is a big company with deep pockets, which it was going to take do the kind of expensive redevelopment in the first place.  Add in the fact that the proposed size and scale of the project was likely far larger than anything anticipated in the downtown.  And yet, they couldn’t make it work at less than seven stories.

That jibes with the BAE findings from several years ago that concluded if there was going to be mixed-use redevelopment in the downtown, it was likely going to have to be very high density.

One of the recent quotes is that the fiscal analysis showed “redevelopment only made financial sense when it was greater than or equal to 4 stories tall.”

We may get a better idea, because we know the city wants to rerun the proforma to see if affordable housing is going to be practical for the downtown and that should tell us if market rate will pencil out as well.

But a few years ago, they concluded mixed-use with high density, for-sale residential units could be feasible.

For-sale residential may be feasible on larger lots with higher densities or larger unit sizes (that is not likely to solve housing needs for workforce or low income however).

Office over retail may work in unique circumstances.

Parking challenges will remain—unless the city is able to do away with parking minimums.

One suggestion, though, that the city should continue to look into: “Consider entering into public-private partnerships with developers to help put together feasible development projects that attract new businesses to downtown. This could include utilization of City-owned land on terms that help to bridge feasibility gaps where there is an expected return on the City’s involvement.”

Clearly the city is going to need to get creative in how it approaches housing in the downtown.  My point here is that counting on the downtown to solve housing needs may be problematic.

2 thoughts on “Commentary: City Is Counting on the Downtown Plan for Housing – Here’s Why That Could Be Challenging”