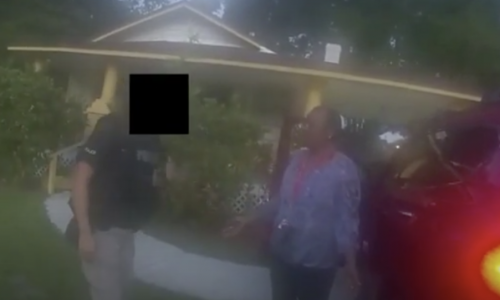 TALLAHASSEE, FL—Police bodycam footage released this month shows over 20 people in Florida visibly confused by their Aug. 18 arrests for allegedly committing voter fraud in the 2020 election after they had been told by the state of Florida that they were eligible to vote.

Governor Ron DeSantis (R) recently created a state Office of Election Crimes and Security, which handled the investigations and arrests. Those arrested face up to 5 years in prison for illegally registering to vote and voting.

They allegedly violated a state law which prevents people with felony murder or sex offense convictions from being allowed to vote. This group was excluded from the 2018 state referendum which restored voting rights for people with convictions.

The arrests were scenes of confusion as those arrested were visibly perplexed by what was happening, and many of the arresting officers were understanding and apologetic as well.

One such voter, Romona Oliver, was arrested as she was leaving for work, and, when told that it was for voter fraud, said, “Voter fraud? I voted, but I didn’t commit no fraud.”

Another man when arrested asked, “What is wrong with this state man? Voter fraud? Y’all said anybody with a felony could vote, man.”

Much of the uncertainty came from a significant lack of clarity in state guidelines over which felons were not eligible to vote. Voter registration forms do not say who cannot vote; they only require a potential voter to swear that they are not a felon, or that if they are, their right to vote has been restored. There is no mention that those with felony murder or sex offenses are not eligible for a restoration of their rights.

In fact, many of those arrested were encouraged by state employees to vote. One man, Nathan Hart, recalls being told at the Department of Motor Vehicles that he should register to vote. When he told the employee that he did not think he could because he was a felon, the employee said, “Well, hey, if you can vote, they’ll let you vote. You know, just fill it out anyway. And if you can’t vote, they won’t let you vote.”

The arrests have raised calls for a reform of the voting system, which advocates have decried as broken.

Neil Volz, the deputy director of the Florida Rights Restoration Coalition, compared the situation Hart found himself in as analogous to a 13-year-old being given a license and then being arrested after being told they could drive legally.

“We just believe that we should expect that we can know who’s on the rolls and that people can have assurances when the government gives them a voter ID card that they are in fact eligible. If you can’t trust the government to tell you whether you’re eligible or not, who can you trust?” Volz asked in an interview with a local news outlet.

The Florida Department of State keeps charge of the voting rolls and is responsible for clearing them of ineligible voters. Romona Oliver was deemed eligible by the Department multiple times and given a voter ID card.

While the scenes of the arrests were characterized by confusion by those arrested, the officers on the scene often appeared sympathetic. One officer, after Hart told him what happened at the DMV, said, “Then there’s your defense. That sounds like a loophole to me.”

Another officer discussed the case of the man he arrested and seemed confused himself about the charges, saying, “I’ve never seen these charges in my life.”

The arrests have also raised accusations of voter suppression with a political motive and racial bias. Most of those arrested are Black, and a majority were registered Democrats.

An attorney for Romona Oliver noted that he thinks DeSantis’s task force targeted those it did because of their criminal records, which likely would reduce public sympathy for them. In fact, in a news conference announcing the arrests, DeSantis specifically mentioned their criminal records.

Hope remains for those who were arrested, however, as state law clarifies that a voter must willfully commit voter fraud. As most of those arrested genuinely thought they could vote, and in many cases were cleared by the Department of State, prosecutors may not be able to bring charges.

Nevertheless, many see the incident as yet another indicator that America’s voting system is broken.