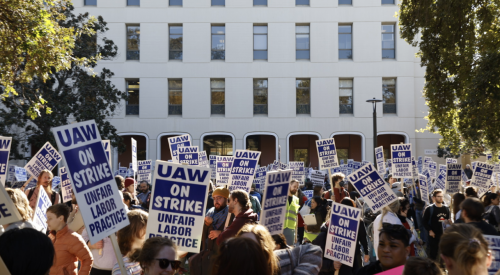 On Monday, tens of thousands of academic workers went on strike against the University of California across all ten of its campuses. The strike created a massive halt in work at all ten campuses.

Forty-eight thousand academic workers—composed of academic student employees, postdocs, academic researchers, and student researchers—walked off on Monday to demand higher wages and better benefits. These demands stem from grievances against the University of California (UC) for being overworked and underpaid.

The UC has been in negotiations with the United Auto Workers (UAW), an organization that represents the academic workers in four bargaining units, but negotiations have now come to a standstill. These negotiations took place throughout the weekend and extended to Monday; however with a lack of progress, the UC is requesting that a third-party mediator be called in. Tentative agreements were made surrounding the work environment and accessibility, but not the other demands. With those core demands still unmet, the strike has continued into Wednesday and will undoubtedly persist for more days to come.

With academic workers carrying out the majority of work done in a classroom—leading discussions, organizing laboratory periods, teaching students, grading assignments—and conducting research for the university, I wholeheartedly believe academic workers deserve better compensation and benefits for the amount of work they perform. Their current salaries belittle their value in the UC.

I consider it unjustifiable for the UC to provide academic workers with poverty-level salaries, given the substantial amount of work they do. Even if they are considered part-time workers, many graduate students work double their expected hours per week, but still are unable to live a stress-free life.

Lavanya Nott, a third-year graduate student in the geography department and a student researcher at UCLA, reported to the Los Angeles Times, “We’re always thinking about how little money we have and how constrained we are financially, and I think [a higher wage] would give us some peace of mind and freedom to focus on our work and have some dignity.”

These are students who hold bachelor’s degrees and are working hours equivalent to a full-time job, all while conducting research. Altogether, a livable wage is warranted, especially with the housing costs and the cost of groceries increasing.

Furthermore, graduate workers have a meaningful impact on undergraduate students by providing tremendous support through individualized help. The discussion periods and office hours graduate students hold to allow for one-on-one sessions between a Teacher Assistant and student. These hours are invaluable for undergrads because students are able to ask questions not answered in the limited lecture time with professors and receive feedback on assignments.

As of now, the walkouts have brought about changes in workplace environment and accessibility, but will there be any significant changes in the core demands: better pay and benefits?

I deem it too early to tell. The strike has continued through Thursday with academic workers vehemently protesting around campuses and drawing in support from undergrads. On the other side, the UC is reluctant to fulfill all the demands of the UAW.

The UC states they will resume negotiating in good faith and want to reach agreements as soon as possible. However, progress is slow with the UC only offering to meet with one of the four units on Tuesday. Therefore, despite academic workers’ unwavering determination to meet their demands, I do not envision this conflict ending any day soon.