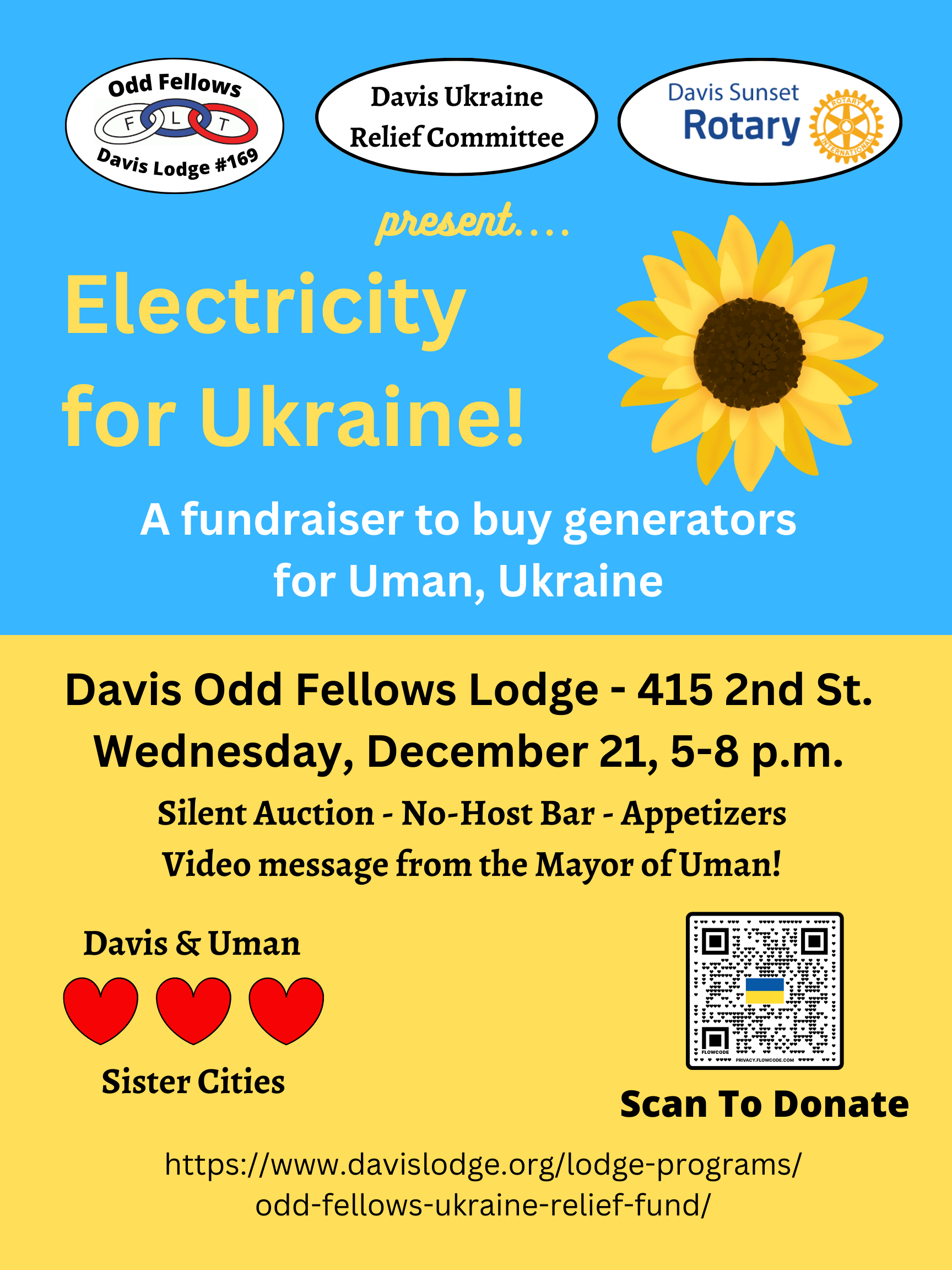 The first of Davis’ Sister Cities was Uman, Ukraine. Due to the on-going war, their electrical grid is spotty; they get, at most, electricity for half the day. It is cold in Ukraine. We have been in direct contact with the mayor of Uman and their Sister City liaison. Their most pressing need is power to heat their shelters.

The Davis Odd Fellows, Davis Ukraine Relief Committee (DURC), and the Davis Sunset Rotary are teaming up to get generators purchased and shipped to Uman early in January. This is a tall order and we need your help.

We are hosting a benefit to raise money to purchase and ship these generators on Wednesday, December 21st, from 5-8 p.m. at the Odd Fellows Lodge, located at 415 2nd St., Davis.

There will be complimentary appetizers, a silent auction, no-host bar, and a video message from the Mayor of Uman! Food and drink are being donated by caring individuals and beer has been donated by Dunloe brewery. Can’t make the event? Donations can be made at any time by scanning the QR code, or clicking the “Donate” button at the URL below.

Working together, the Odd Fellows and the DURC have previously collected over $9,000 in donations from members of our community. Since everyone involved is a volunteer, over 99% of all donations received have gone directly to those in need. Initially, money we raised went to Ukraine via the international Odd Fellows organizations where money was used to relocate and rebuild a hospital and birthing center that was bombed in Lviv. Since our connection with the DURC, donations have stayed closer to home as we have helped four families get established in our extended neighborhood. A family of six, a single mother with three children, a family of four whose father stayed to fight in Ukraine, and a woman with an elderly father and a special needs daughter have all received financial assistance. During the month of December, all proceeds to the Ukraine Relief Fund will got to purchase and ship generators to our Sister City, Uman. We need to raise $10,000-$15,000 by December 31st. Will you help?

Help us keep our sisters and brothers in Uman warm for the winter!