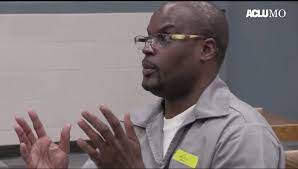 JEFFERSON CITY, MO— After being convicted in 1995 and charged with a 241-year sentence, Bobby Bostic never imagined he would leave prison. On November 9, 2022, when he left Algoa Correctional Center in Jefferson, the first person he hugged was the now-retired Judge Evelyn Baker who sent him to prison to begin with.

In Dec. 1995, Bostic and his friend (who were both teenagers at the time) committed a series of armed robberies in which he and his friend robbed six people at gunpoint while the group was delivering Christmas presents to a family in need. Bostic and his accomplice both shot at the victims, which resulted in one person being grazed by a bullet.

At the time, Bostic was 16 years old and seen as a lost cause by many, including then-Judge Baker. After being convicted on 17 counts, Baker allowed his sentence to run consecutively, totaling 241 years behind bars. This meant Bostic would not become eligible for parole until he was 112 years old.

As Bostic explained in an interview with 48 Hours, this conviction “motivated me to say, ‘One day, if I ever do get out, I will see [Baker]. And she’ll realize the mistake she made when she sees the person I became.” In the three decades since Bostic entered prison, he began attending school and reading and writing books.

Despite this daunting prison sentence, Bostic found new passion and drive while incarcerated. “Once you make so many mistakes, you get tired, and you want to do something different,” he explained. “So I started reading. That’s how I found myself, in books. And that’s the most peace I ever get in the world.”

While completing his sentence, Bostic obtained an Associate’s Degree and is currently working towards his Bachelor’s in business. He also began writing poetry and prose, a total of 15 books while behind bars.

Seeing this remarkable turnaround, Baker began to think she made a mistake and in 2021 she began advocating for Bostic’s release. In a 2021 interview with 48 Hours, Baker explained “241 years is insanity, when I think back on it…He was a kid. He was a little boy.”

In Missouri in 2021, the legislature passed the Bobby Bostic Law because of Baker and others’ support of Bostic’s release. This law allowed Bostic and other people incarcerated while juveniles to apply for parole even if they were not previously eligible. In Missouri, in the past year, none of the people arrested as juveniles and released have reoffended or had to return to prison.

Bostic’s victims had no objection to his release, and one even wrote a letter of support. As Bostic explained “it’s up to us, the juveniles who get out and get the second chance, to do something different, to prove to those people like, ‘I’m just like you.’”

Baker told 48 Hours “the Bobby Bostic I put in prison is not the Bobby Bostic who got out. Bobby did what many people can’t do. He created himself.” After being released, Bostic was finally able to spend Thanksgiving with his family as well as with Baker.