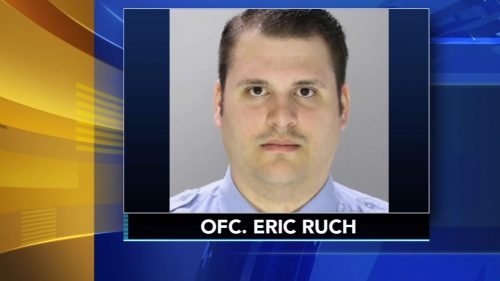 PHILADELPHIA, PA – Philly District Attorney Larry Krasner has announced his office has filed a motion to reconsider the sentence of Philadelphia Police Officer Eric Ruch, charging his sentence for killing a man should be much longer.

Eric Ruch was convicted of voluntary manslaughter for shooting and killing unarmed Dennis Plowden on Dec. 27, 2017 but the sentence fell far short of what is normally handed out, said Krasner.

Krasner explained, “then-Philadelphia Police Officer Eric Ruch shot and killed Dennis Plowden through his raised left hand, and into the head, while he was seated on a sidewalk surrendering and unarmed.”

DA Krasner also noted witnesses saw 25-year-old Plowden was in the middle of surrendering when Ruch fired a bullet at his head.

Krasner said the standard sentence range for cases like Ruch’s would have been 54 and 72 months, according to the Pennsylvania Sentencing Commission, with a minimum sentence of 42 months.

However, Krasner noted the former police officer received a sentence of just 11½ to 23 months of incarceration.

Krasner announced the filing to reconsider Ruch’s sentence after his office conducted a review of appellate options regarding the accused former officer.

“Yesterday, my office filed a motion respectfully requesting the Court of Common Pleas to reconsider its sentence of 11½ to 23 months incarceration for former Officer Eric Ruch, who was convicted this fall for his role in the on-duty killing of Dennis Plowden, an unarmed Black man, in 2017,” said Krasner.

“The record does not support this departure; such a departure severely lessens the gravity of the offense for which the defendant was convicted – intentionally taking the life of another human being – and suggests that a different standard applies to this defendant than other defendants.”

“We respectfully request that the Court reconsider its sentence, and sentence the defendant within the state standard guidelines. His conduct warranted such a sentence, and it would be the just result,” said Krasner.