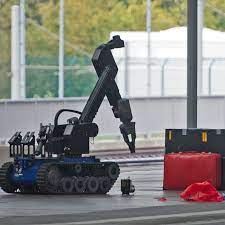 SAN FRANCISCO, CA –The San Francisco Board of Supervisors proposed a broad policy to “allow police to bring armed robots to every arrest, and every execution of a warrant to search a house or vehicle or device…police might even bring armed robots to a protest.” This comes after a report from The Intercept in early October, where Zoom meetings between the Oakland police department and civilian oversight bodies discussed the possibility of allowing robots to kill humans “under certain circumstances.”

In Oakland, police decided against seeking approval to use the lethal robots, but said they would continue to “explore all possible uses.” However, the San Francisco Board of Supervisors voted to “let the city’s police use robots that can kill.”

City Supervisor Rafael Mandelman said the department will have access to “seven robots designed to neutralize and dispose of bombs, and provide video reconnaissance for operators” and “under this policy, SFPD is authorized to use these robots to carry out deadly force in extremely limited situations when risk to loss of life to members of the public or officers is imminent and outweighs any other force option available.”

The Electronic Frontier Foundation (EFF) has been a vocal opponent of  the policy, stating that none of these devices “should be armed with any kind of weapon.” EFF cites many instances where lethal or dangerous police robots and technology more generally have been harmful to the community, from Amazon Ring footage and face surveillance being used to surveil BLM protestors to “cell site simulators” or “Stingrays” being brought from military contexts to catch immigrants in the US. EFF states that “we are moving quickly towards arming such robots and letting autonomous artificial intelligence determine whether or not to pull the trigger.”

Response from the Bay Area public has also been largely in opposition to the policy. Rex Huppke of USA Today wrote a sarcastic opinion piece on how to arm a toaster in the event a robot comes to kill you, while San Francisco District 9 Supervisor Hillary Ronen tweeted, “Beyond disappointed that the Board seems poised to allow SFPD to use weaponized robots to use force against human beings. Only 4 of us clearly against. Shortsighted, dangerous, sad. The spirit of the SF I have always admired is weeping today.”

In a city that claims to herald progressive politics, it remains to be seen how this newfound power and technology for police departments will be used in the city and applied to other cities across the country.