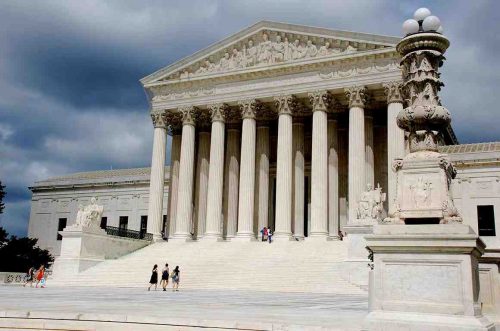 By Rena Abdusalam and Ivan Villegas

WASHINGTON, DC – The U.S. Supreme Court began hearing oral arguments Monday on a case that, according to the dean of the University of California Berkeley School of Law Erwin Chemerinsky, threatens to allow business owners the right to discriminate based on the First Amendment.

The case, known as 303 Creative LLC vs. Elenis, involves Lorie Smith, a graphic designer and web artist, who claims she won’t design a wedding website for same-sex weddings because of her religious belief – a Colorado law states businesses who sell services to the public may not discriminate on the basis of sexual orientation.

Smith – who hasn’t actually turned down a customer – petitioned the federal district court to have the Colorado law struck down as unconstitutional and to issue an injunction to keep it from applying to her.

Smith argues the law violates her First Amendment right to free speech by compelling her to make wedding websites for same-sex couples, while the state argues that it is not speech but her discriminatory conduct that is being regulated.

In addition, the U.S. Court of Appeals for the Tenth Circuit rejected Smith’s claims and highlighted that the government has a compelling interest in prohibiting discrimination against marginalized groups.

The U.S. Supreme Court granted this case review. The question that is presented to the court is “whether applying a public-accommodation law to compel an artist to speak or stay silent violates the free speech clause of the First Amendment.”

This will not be the first time the Supreme Court reviews this same Colorado law.

In Masterpiece Cakeshop vs. Colorado Civil Rights Commission, argued in 2018, the Supreme Court narrowly ruled in favor of a bakery that refused to bake wedding cakes for same-sex couples.

Back then, the Supreme Court did not answer the broader question of whether an individual’s exercise of free speech or free exercise of religion could cause an exemption from anti-discrimination laws.

With an assembly of more conservative judges, the current court’s willingness to take this new case could be worrying for the targeted groups of individuals and suggests that exemptions could be made in long-established civil rights laws, according to legal scholars.

Chemerinsky argues there will be grave consequences if the court rules in favor of Smith, and

stated there is no reason why First Amendment exemptions would be limited to sexual orientation.

Individuals that discriminate against others based on factors like race, sex, or religion could raise a First Amendment defense, according to Chemerinsky, and this would end up extending to laws that forbid prejudice in all circumstances, including employment and housing.

He then describes situations in which the forewarned exemptions could affect a person’s life, noting, a religious employer that objects to gay, lesbian, or transgender individuals could file an exemption from the laws prohibiting employment discrimination.

Likewise, a religious employer, Chemerinsky added, who believes that men and women should not work together could refuse to hire one of the two genders. In addition, a religious landlord that has objections to interracial marriage could decline to rent housing to interracial couples.

It is also shown, he said, that the court has been clear that an individual having a religious belief is the one and only requirement and whether that belief is held by an assembled religion makes no difference.

In a 1981 case, the court ruled a Jehovah’s Witness follower could claim a religious basis for quitting their job, even though the conditions of the faith did not reflect their views, Chemerinsky said, adding that even if the law crossed First Amendment rights, the appeals court ruled the Colorado law was constitutional.

Chemerinsky maintained his analysis was compiled with long resolved constitutional doctrines. He expressed that people should not use their religious beliefs as a foundation for inflicting harm on others.

“There is always a tension between liberty and equality. Any law that prohibits discrimination limits the freedom to discriminate,” said Chemerinsky.

Chemerinsky added, “For decades, the Supreme Court has been clear that stopping discrimination is more important than protecting the freedom to discriminate. The court should reaffirm this principle in this case. But I worry that the conservative justices will use this case to undermine countless anti-discrimination laws.”