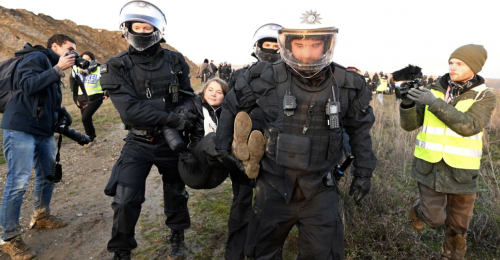 Greta Thunberg, a young Swedish activist, has recently made her way into the news once again. On January 17, 2023, Greta Thunberg was detained by police in western Germany for the second time while protesting against the expansion of the Garzweiler 2 coal mine. This eventually led to an abandoned village in Lützerath becoming an unfortunate casualty of this expansion.

Thunberg stood on the edge of the mine until three officers were observed carrying her away from the protest as she smiled with pride. Although this action was rather unwise and potentially dangerous,  I applaud Greta Thunberg’s tenacity in standing up for her beliefs and for the western German community.

The officers confirmed that those detained would not be charged and that Thunberg was not arrested. Instead, they elaborated that detentions were necessary for the protestors’ own safety since the mine’s soil was unsteady due to the rainfall from previous days. They were trying to remove people from the “danger area.” Since the 17th, over 100 people have been evacuated.

However, despite the reasonable explanation for the detaining, the protests highlight the problems of expanding the coal mine. The activists proclaim that “burning coal undermines Germany’s efforts to reduce greenhouse gas emissions,” especially since Germany recently announced plans in 2021 to cut down emissions. The Finance Minister, Olaf Scholz, further planned to cut carbon emissions by 65 percent by 2030. Yet, their recent plans to refurbish and augment the Garzweiler 2 coal mine undermine their previous statements.

Activists even sent a cease and desist letter stating that mines are a “direct violation of our human right to a clean, healthy, and sustainable environment, your duties of care, as well as the rights of Indigenous people.” Greta Thunberg echoes this sentiment when she proclaimed that “we need to stop the current destruction of our planet and sacrificing people to benefit the short-term economic growth and corporate greed.” However, despite the many pleas, companies like RWE, who actually own the abandoned Lützerath village, want to open new mines by this winter. The government alleges that they need coal mines to make up for the loss of gas from Russia.

Be that as it may, this would violate the terms of the Paris Agreement’s ambitions to “limit global temperature rise to 1.5 degrees Celsius above pre-industrial levels.” According to BBC, the protested coal mine is surrounded by Lignite (“the dirtiest form of coal”) where 99 percent of the carbon gets converted to CO₂. Lützerath produces 25 million tonnes each year. The steps of creating a bigger mine and evacuating citizens do enough additional harm to the environment by changing the terrain and the community around it.

Greta Thunberg’s actions have brought more widespread attention to the coal mining situation in Lützerath. After all the consideration from the protests (approximately 35,000 people in attendance), the government and corporations should listen. Since Lignite is such a dirty substance, its rapid usage damages both the landscape and the citizens of Germany. The insistence on creating a bigger mine is proof that the government is looking for an easy way out to appease the increasing demands for energy.

However, Germany, as a whole, should be implementing more clean energy resources. According to trade.gov, “In 2019, 46 percent of the country’s [Germany] electricity mix came from wind, solar, biomass and hydroelectric sources.” Therefore, Germany does have the capacity and discretionary funds to carry out more options for clean energy. Renewable energy gives people more jobs and is better for the environment, and thus, is better in the long run. We as a nation need to stop searching for easy solutions and install more long-term results to the energy demands and the climate crisis.