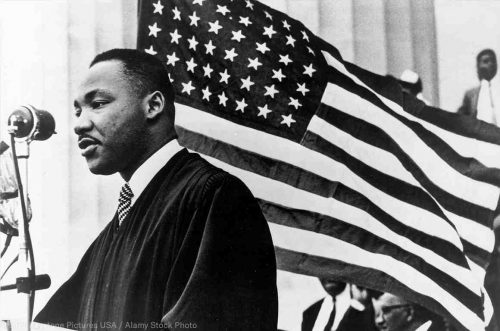 LA Times columnist Erika D. Smith touched on what some people claim is the futility of the promise of erasure of divisions and hatred that have plagued American Society for centuries.

Smith wrote, “What gets quoted the most — and misconstrued most — is one part of his speech at the March on Washington in 1963. The part where he says he had a dream that his children would ‘one day live in a nation where they will not be judged by the color of their skin but by the content of their character.’”

Smith paints a gloomy portrait of the progress America has made since the time of Dr. King by using his own words to show the enduring nature of the issue of police violence, “we can never be satisfied as long as the Negro is the victim of the unspeakable horrors of police brutality.”

Following the death of three men as a result of encounters with the Los Angeles Police Department, Smith decries the lack of any attempt to get the trained mental crisis units involved for individuals who were, “in the midst of a mental health crisis.”

“Two of the men, Takar Smith and Oscar Sanchez, were fatally shot. The third, Anderson, went into cardiac arrest and died after police tased him repeatedly,” Smith wrote, noting that present at the vigil for Anderson, Rev. James Thomas stood in the rain, before a crowd of people who had come to pay their respects, crying out for answers.

“How many more hundreds of years must we endure this, God?” Rev. Thomas exclaimed. “This young man did all the right things. He went to college. And then he decided to use his education to give back to our people, to young people.”

The column noted that with the 10-year anniversary of Black Lives Matter coming up, many took the time to reflect on what inroads have been made to prevent the unjustified murders of historically marginalized peoples.

Smith notes a cousin to Anderson, Patrisee Cullors was a founder of the Black Lives Matter movement and was present at the vigil where she made a few remarks:

Smith quoted Cullors: “I stand in front of you on Venice and Lincoln…where my cousin begged for his life, where he pleaded for his life. No human being deserves to die like that.”

“This year is the 10-year anniversary of Black Lives Matter,” Cullors said. “Ten years ago, when many of us stood up and said enough is enough — we are going to challenge the public to value Black life. And now, 10 years later, I stand in front of you on Venice and Lincoln.”

Cullors continued, “Folks who’ve been in the movement for many decades start to … see the cycle repeat itself,” she said. “And I’m racking my brain, like, what else can I do? How many more of us have to be sacrificed for actual meaningful change to happen?”

Columnist Smith highlights the vision that Martin Luther King Jr. had and overlays it with the somber reality of yet another life being cut short; something many fiercely believe could have been avoided.

Smith writes, “like many others, particularly on this day in January, Cullors has turned to King, looking for answers. And she is convinced that “my cousin would be alive if we had actually manifested his dream.”

Smith noted edited police footage that has been released of the police altercation with Anderson shows him on the ground, crying out for help as he is tased repeatedly by officers.

A toxicology report, said Smith, had been conducted, with its findings showing that, “Anderson had cocaine and cannabis in his system, a full autopsy report from the county medical examiner’s office could take months.”

Smith concludes by noting a full investigation of the event being promised by Mayor Karen Bass, as well as a push for the officers involved in the death of all three individuals to be placed on leave.

“There are less lofty but still important steps toward public accountability that can be taken now, though. The most obvious is for the LAPD to start releasing the full, unedited footage of violent encounters like the one with Anderson. Other police departments in California do it. There’s no reason it can’t be done here, too,” wrote Smith.

Alexis Rios-Jimenez is a recent graduate from California State University, Los Angeles where he majored in Political Science with an option in Pre-Legal Studies as well as a minor in Communications. He currently works for a personal injury law firm as he prepares to go to law school to become a civil rights attorney. Alexis is actively involved in his community, representing the 57th assembly district in the democratic party as a Delegate.