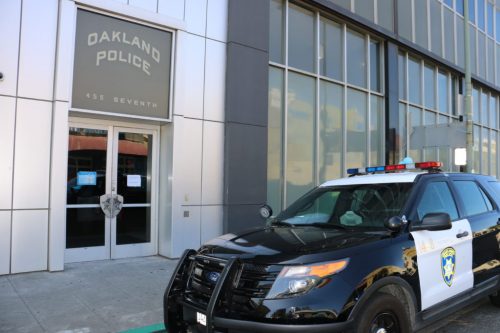 According to a statement issued by Oakland Mayor Sheng Thao and City Administrator Ed Reiskin, Chief Armstrong was put on leave after they reviewed reports by Clarence Dyer & Cohen LLP and that, “effective immediately, Assistant Chief Darren Allison will serve as Acting Chief of the Oakland Police Department.

“The decision was not taken lightly, but we believe that it is critical for the safety of our community that we build trust and confidence between the Department and the public. We must have transparency and accountability to move forward as a safer and stronger Oakland,” Thao and Reiskin said in the prepared statement.

“Oakland and its Police Department have taken the negotiated settlement agreement very seriously and undertaken a number of steps to improve our systems for accountability and transparency. As part of that resolve, we have to hold officers accountable when they violate the public trust,” they added.

According to a court filing, the investigations made by Clarence Dyer & Cohen LLP revealed acts of misconduct made by individual officers and exposed systemic insufficiencies in OPD’s Internal Affairs and Criminal Investigation Division.

“Disclosure of the Conclusions and Recommendations allows for great public transparency and accountability for OPD to ensure that the cultural change necessary for compliance with the NSA and AMOU governing this matter is achieved,” Judge Orrick expressed in his statement.

The judge added the investigation “revealed not only individual acts of misconduct by officers, but also exposed systemic deficiencies in the Department’s ability to investigate misconduct of its members.”

On March 25, 2021, according to the findings, a sergeant of the Oakland Police Department was driving an OPD vehicle in the parking garage of his residence in San Francisco. Another sworn OPD officer, who was also later identified as the officer’s romantic partner, was present inside the vehicle as a passenger.

The probe noted as the sergeant drove out of the garage, the OPD-issued Chevrolet Tahoe crashed into an automobile that was located in an adjacent parking spot. The Tahoe ripped off the front bumper of the parked car.

Because the City of Oakland received an insurance claim for the damage caused to the hit vehicle, the OPD was notified of the collision. The sergeant and officer did not report the incident to their supervisors. The insurance claim was received on May 25, 2021, and OPD became aware of the incident on July 14, 2021.

The investigation added that an OPD lieutenant was asked to identify the driver of the vehicle. After the lieutenant shared the photographs and video of the collision to the sergeant, the sergeant was instructed to make a report of the incident to the San Francisco Police Department, since the collision happened at the sergeant’s residence. The lieutenant completed the referral paperwork for the collision and assigned the matter to the Internal Affairs Division.

The investigator, according to court documents, was able to locate a longer video of the incident that extended security footage showed a man and woman pulling rollaboard suitcases through the parking garage, putting the luggage into the vehicle, and entering in their stated sides.

Although the investigator was not able to identify the passenger in the video, court documents indicate he learned the sergeant was in a relationship with another OPD officer. He contacted the HR department to see if a report about the relationship between the superior officer and the subordinate officer was ever filed. He learned that there were none.

The IAD investigator interviewed the subject sergeant and passenger-officer, who were both represented by the same attorney from the same law firm.

The probe noted both the sergeant and passenger stated that they had no memory of the vehicle collision and were unaware of it when it happened. The sergeant’s statements were contradictory to his prior statements when he viewed the video of the collision.

The court noted the investigator obeyed orders and altered the report that minimized the seriousness of the misconduct. It allowed the sergeant to avoid the suitable consequences of the hit and run.

The final report contained many revisions to the original draft: it did not sustain the sergeant for the hit and run; it changed the passenger’s role in the collision as a witness; it stated that the sergeant and officer were credible; it removed any sort of mention of their relationship; and it abolished the Truthfulness MOR or any investigation into the issue.

As a result, the sergeant only received counseling and training.

In another incident investigated by the independent law firm and cited by the court, on April 16, 2021, or early morning of April 17, 2021, about a month after the hit and run, an OPD officer discharged a service weapon inside the freight elevator while completing his shift inside the Police Administration Building. The discharge produced a strike mark on the elevator’s wall.

When the mark was discovered by OPD officers the next day, an investigation was created to find who was responsible for the accidental firearm discharge, as there was no report made.

The investigation started with the collection of video footage from security cameras that overviewed people entering and exiting the freight elevator. The investigation also reviewed proxy card data, which revealed who had access to the elevator around the time when the firearm was discharged.

However, on April 25, 2022, a police sergeant confessed that he was the officer who discharged his firearm in the elevator, and that he collected and got rid of the shell casing by throwing it in the San Francisco Bay while driving.

He was placed on administrative leave and the Criminal Investigation Division conducted a similar investigation into the incident.

When it became evident that the officer who had been involved in the vehicle collision was the same officer who had failed to report the discharge of his service weapon inside the freight elevator, the City of Oakland finally brought in Clarence Dyer & Cohen LLP law firm to lead an independent investigation in both incidents.

During their investigation, the law firm reviewed email correspondences, visual evidence, reports, transcripts, cell phone records, meeting notes, and other data. Additionally, it interviewed many witnesses, most notably the sergeant and the passenger-officer that were subjects in both incidents.

For the conclusion of the vehicle collision, investigators recommended sustainments of multiple MOR violations against the IAD superior officer that directed the subordinate investigator to revise his draft, the lieutenant who interfered with investigation by showing the sergeant visual evidence of his crime, and the Chief of Police for failing to hold his officers accountable.

The independent investigators recommended sustainments of multiple MOR violations against the sergeant because of the discharge, the destruction of evidence, and the omission to report the incident.

“Over the course of conducting the Internal Affairs Division investigation into the facts surrounding the discharge of a service weapon in the Police Administration Building, outside investigators identified certain procedural irregularities and possible violations of OPD policy committed by OPD members who conducted the initial criminal and administrative investigations,” stated Clarence Dyer & Cohen LLP in its report.

The issues presented resulted in a separate investigation of the Internal Affairs Division and Criminal Investigation Division.

During the investigations, the investigators came upon inadequacies in both departments’ process and policy, in which they eroded the truthful discovery of facts. The deficiencies were created from gaps in the policies, the failure to follow their implements, and the lack of accountability of the OPD members.

“If OPD is to fulfill its duties to the community it serves it must create and maintain a commitment to uncovering the truth and holding OPD members accountable for misconduct rather than thwarting the investigative process for the purpose of protecting fellow OPD members,” Clarence Dyer & Cohen LLP argued.

Due to the deficiencies that were revealed through the investigations, Clarence Dyer & Cohen LLP offered recommendations to strengthen OPD’s capability of holding their officers accountable.

The law firm noted the “OPD should require all personnel involved in the investigation, review, supervision, and approval of IAD and CID cases to conform to the recusal standards of applicable policies.”

The law firm also recommends that the “OPD should adopt a policy that requires approval and documentation of all changes to draft Reports of IAD Investigations.”

The current policy set in place allows authority figures to seek other conclusions of investigations for personal or unprofessional reasons. By making the IAD update its policy would allow no authority to withdraw MOR violations or demote a subject officer to a witness without accountability.

Clarence Dyer & Cohen LLP also adds that “OPD should adopt a policy that requires all briefings regarding ongoing IAD investigations to be documented.”

Ensuring that all briefings of a case would be documented would create the inability for witnesses to recollect past topics and details of conversations.

Additionally, the firm said the “OPD should adopt a policy that requires the Chief of Police to read reports of IAD investigations before signing them.”

If the OPD adopts the policy of specifically requiring the Chief of Police to read reports, it would allow the Chief to make the ultimate outcome more thoroughly by making them read a full and complete review.

The law firm also established that the “OPD should adopt a Department-specific policy regarding acceptable personal relationships between sworn members and when and how those relationships must be reported.”

Hidden personal relationships create issues for fact-finding in investigations. Clarence Dyer & Cohen LLP recommended that the OPD should adopt a clear policy concerning relationships between the members of the OPD.

Clarence Dyer & Cohen LLP noticed that OPD members regularly used their personal cell phones for work-related issues. However, the law firm added the use of cell phones has become a haphazard, as it raises concerns about the abolishment of evidence, and investigations were hampered due to the unclear policy.

Lastly, the firm said “OPD should revise its rule regarding physical fitness for duty to explicitly include mental health” and “OPD, through its Office of Internal Accountability, should review and improve its policies, practices, and training regarding investigations of members accused of criminal misconduct to ensure rigor and accountability.”

Officers who experience mental health distress may be considered not fit for duty, said the firm and direct guidance about how officers experiencing distress should interface with their commanders is necessary.

The law firm’s recommendation should be used to investigate any OPD member’s potential criminal conduct with clear attention, resources, and rigor. The investigations conducted by Clarence Dyer & Cohen LLP unveiled a lack of precision on how to investigate a police officer who is also under administrative investigation.

“The actions of one officer who twice violated the simple rule to self-report one’s misconduct launched independent investigations which revealed systemic failures far larger and more serious than the actions of one police officer. The actions of OPD’s Internal Affairs created an environment that allowed that officer to go on to commit far more egregious and dangerous misconduct, to wit: discharging a weapon in a building full of people,” declared Clarence Dyer & Cohen LLP.

“For the sake of public confidence in the Oakland Police Department and its relationship both with its members and the community it serves, OPD must take the necessary steps to review the failures of its internal affairs processes and to commit to more rigorously investigating misconduct to prevent the recurrence of similar, or more serious, events in the future” the firm continued.