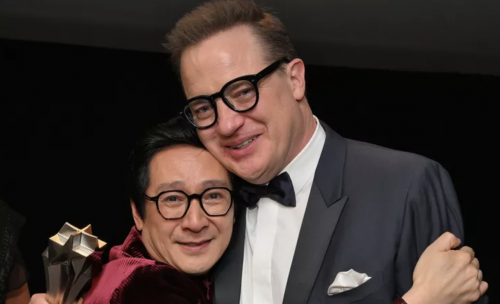 TV shows and movies are often presented to us with hopes of leaving a lasting impression on the audience and on the people involved in their development. This is especially true during awards show season, when artists and their works reach the spotlight and are given special attention.

When keeping up with recent award ceremonies, two familiar faces have received much recognition from their peers and the industry for their remarkable comebacks. Certainly no strangers to the movie screen, actors Ke Huy Quan and Brendan Fraser returned to the spotlight due to their profound performances in their respective films Everything Everywhere All at Once and The Whale. Quan and Fraser’s “comebacks” give us an insight into an industry that is rarely a reflection of the ordinary world and is constantly changing.

Ke Huy Quan was best known for his roles as Short Round in Indiana Jones and the Temple of Doom and as Data from The Goonies both roles he portrayed as a child back in the 80s. In Everything Everywhere All at Once he plays Waymond Wang as Quan’s feature in W magazine’s Best Performances spread describes his character as “the heart of the A24 hit and the moral compass that remains steady.” The film is filled with amazing performances by fellow actors like Michelle Yeoh and Stephanie Hsu, with Yeoh and Quan’s portrayals earning their first Golden Globe.

In his speech, Quan thanked Steven Spielberg for giving him his first role, while importantly highlighting the struggles he faced in the industry. “For so many years, I was afraid I had nothing more to offer, that no matter what I did, I would never surpass what I achieved as a kid.” The films Quan took part in as a child are classics that still resonate with an audience. While it is sad that, as stars get older, fewer opportunities are offered to them, Quan’s experience points to a larger issue in the industry—a problem of representation.

This is an issue that Quan acknowledged in his Best Performances feature when asked about why he took a long break from acting. “I had to be realistic,” he stated. “There were not a lot of opportunities for an Asian actor at that time. I had no choice but to do something else, so I went to film school, graduated, and started working behind the camera.”

Quan’s passion for films never left. Rather than diversifying early on, the film industry is just now learning how much the audience loves to see stars that resemble them. It is important that the industry continues to learn of the great talent that diverse actors can bring to a piece, and how they reach a wider audience after giving these actors the opportunity to hold a narrative.

Brendan Fraser, known for his roles in adventure films like George of the Jungle and The Mummy, once a “leading man,” has returned in a drama piece The Whale garnering Oscar Buzz following his win at the Critics Choice Awards. Despite his star status, Fraser faced challenges in the industry. He revealed to GQ back in 2018, that president of the Hollywood Foreign Press Association (HFPA) known for the Golden Globes, Philip Berk, sexually assaulted him in 2003. Since then, Philip Berk has been fired from the HFPA, especially after a decades-long reign for his distasteful comment on the Black Lives Matter movement. The association itself has been under fire for the lack of diversity of its members, which they are said to be working on, in their board and “throughout the industry.”

Fraser, on the other hand, has shown true strength in his return as his role in The Whale proves that he is more than the adventurer figure from his earlier work. In the film, Fraser portrays Charlie, a teacher that is described as “reclusive.”

In his preparation for the role, Fraser describes that he met with people who struggled with eating disorders and openly spoke to him about their experience. He states “the common denominator was that someone spoke cruelty to them when they were very young.” This challenge inspired Fraser to be a voice for the people that he spoke to, describing “those we so often disregard in our society.”

Despite the praise for Fraser’s performance, the film has received backlash for its “tone and content as fatphobic.” This doesn’t take away from its significance.

In his latest win at the Critics Choice Awards, Fraser’s speech has a sentiment of encouragement  “If you—like a guy like Charlie, who I played in this movie—in any way, struggle with obesity, or you just feel like you’re in a dark sea, I want you to know that if you, too, can have the strength to just get to your feet and go to the light, good things will happen.”

Quan and Fraser’s return to the big screen reveals the film industry’s improvement in diversity and inclusion. They are two actors who also, with previous peers, are opening the doors to allow various others to reach the spotlight.