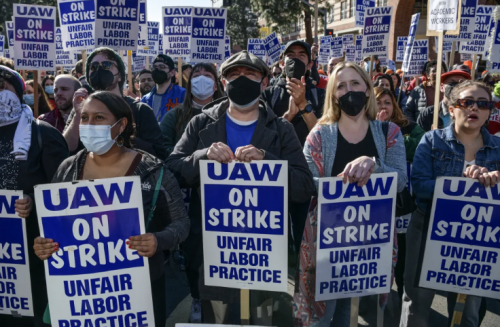 DAVIS––On November 14, around 48,000 academic workers across the University of California campuses decided to walk off their jobs as teacher assistants and strike against the UC system. The protesters, who are mostly graduate students working for the UC universities, argued that they are overworked and underpaid.

Graduate student researchers, tutors, and other academic professionals chose to strike after attempting to bargain for more benefits. Coming weeks before the winter break, this walkout deeply impacted undergraduate student classes. While most undergraduate classes continued to function, some were canceled because teacher assistants refused to teach classes or grade assignments.

The graduate students “keep the UC running,” according to one graduate student worker Jamie Mondello, as they spend hours grading papers and conducting research activities like data collection and study design. They also engage in research that generates significant financing for the UC system; their current pay diminishes their importance to the UC.

For teaching assistants and tutors, UC proposed compensation increases of seven percent in the first year and three percent each year, but the employees complained that this is not enough and demanded higher increases.

Another particularly thorny issue was how pay should be changed for UC graduate students outside the US. International students have to pay non-residential tuition fees, causing them to take longer to complete their work since the university won’t cover them.

Kavena Hambira, a fine arts graduate student from Namibia, reported that “the university talks about being inclusive, diverse, and a world-class institution. How can you possibly say that when the majority of your graduate students are living in poverty?”

A significant number of undergraduate classes were disrupted by these events, as many professors canceled classes and discussions. The teaching assistants are the ones who run the discussion classes, and so a lot of undergraduate students also complained of less access to feedback.

Mondello, a UCLA psychology graduate student, reported that she appreciated a lot of undergraduate students for understanding that the strike is a necessity for academic workers that want fair benefits.

As the strike continued, the UC system began a shutdown on November 21. In response to the shutdown, strikers made barricades on every UC campus.

On December 23, the six-week strike came to an end. According to the two leaders of the UAW union that represent 36,000 graduate students, both sides came to an agreement to increase wages up to 66 percent over the course of two and a half years. By the school year of 2024, the minimum salary for teaching assistants will rise to around 40,000 dollars.

The historic strike that had effects all across the California UC universities came to an end when graduate student workers at the University of California ratified a new labor agreement with significant wage increases, more support, and protections for themselves.

Share:
Previous : Commentary: Young, Black, Afraid and Ignorant Leads to a Story of Injustice
Next : Monday Morning Thoughts: What Is Yolo Doing Wrong on Bail and Recidivism?