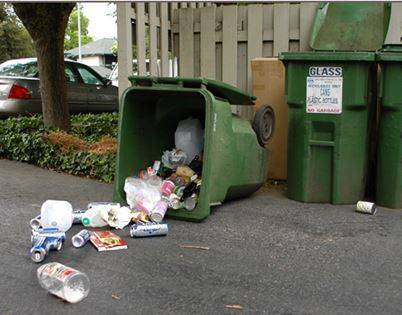 While the city expressed concern about organized groups that come from out of town, using trucks and crews of people to create their own illegal business with the revenue from scavenged property, the policy statements by the city and DWR on their Facebook page may tell a different story.

In Dianna Jensen’s presentation on January 14, 2014, she laid out the increasing concerns about organized scavenging operations brought about by increases in the value of recyclable materials and the economic downturn.

The number of complaints she cited was about 200 a year – a substantial and real number.  The cost to the city and the cost to Davis Waste Removal is tremendous in lost revenue to DWR and increased costs to city residents.

In the end, the council voted unanimously to approve the staff recommendation and move the ordinance for a second reading which was passed last week without a lot of additional discussion.

The problem, as we pointed out at the time, is the law doesn’t make the distinction that council and staff made between a simple homeless person collecting cans and organized bands of thieves.

In a discussion I had with one councilmember, I was told, “We cannot openly advocate for our police to look the other way on the dais.”  They believe that this is a step forward, that the police can simply issue a warning to members of the homeless community who are not part of the organized efforts.

“We are not systematically arresting and citing these folks with the bags of cans under the current law who are clearly in need and not professionally gleaning our neighborhoods for profits. Why would we start now?” I was told.

On February 4, on the “Davis Recycling” Facebook page that is run by DWR, they note, “Removing recyclable material from Davis Waste Removal carts is illegal. Starting on Feb 27, 2014, it will be an infraction with fines up to $500.”

The February 3 post is a bit more pointed, “Have you seen strangers rummaging through your recycling cart?”

The post continues, “Scavengers are not only stealing from Davis Waste Removal, they’re stealing from the residents and business owners of Davis, because the revenue generated from the sale of recyclables goes directly back to the rate payers in the form of lower service rates. Recycling service is provided at no extra cost to Davis ratepayers because the revenue from the recyclables subsidizes the cost for the collection. When scavengers steal the recycling, however, they remove that revenue and cut the funding to the recycling program.”

On the city’s web page – Scavenging Recyclables – it states that removing recyclables from carts and from trash is stealing.

“Recyclables placed at the curb shall become the property of the city or the city’s authorized recyclables collector at the time of the placement at the curb. Recyclables placed inside of commercial containers shall become the property of city-authorized waste collector at the time they are placed in the container.” (Davis Municipal Code 32.01.060)

“Garbage and other containerized solid wastes shall remain the property of the generator until the material is removed from the container by the city or the city’s authorized collector.” (Davis Municipal Code 32.01.060).

The city writes, “The problem isn’t just here in Davis. It’s an issue throughout California, which is why Assembly Bill (AB) 1778 was passed. AB 1778 requires scrap yards that buy $100 or more of CRV bottles and cans or $50 or more of newsprint, to document transactions and to pay for these materials by check. AB 1778 is designed to reduce organized recycling theft in California.”

“Locally, scavenging recyclables is a violation of Davis Municipal Code Section 32.01.060. Violators may be prosecuted and are subject to a fine,” the city’s website continues.  Again, as the DWR post says, “Scavengers are not only stealing from Davis Waste Removal, they’re stealing from the residents and business owners of Davis, because the revenue generated from the sale of recyclables goes directly back to the rate payers in the form of lower service rates. Recycling service is provided at no extra cost to Davis ratepayers because the revenue from the recyclables subsidizes the cost for the collection. When scavengers steal the recycling, however, they remove that revenue and cut the funding to the recycling program.”

They add, “So the next time you see someone scavenging through a recycling cart or bin, remember that it is a crime and you can do something about it.”

Nowhere in any of this language does it mention that the intent of the ordinance to is to deal with organized crime.

The site does direct you to a FAQ by the city and here for the first time, it mentions, “Scavenging is not just a way for some folks to make a little extra cash; it is also becoming a commercial operation. The City has received reports that organized crews from out of town are operating scavenging businesses. Scavengers come from out of town because they know that recycling theft is rarely enforced in Davis.”

The FAQ notes, “Litter and broken glass is often left on the ground after scavengers sort through a bin. Scavengers will often tip over carts, spilling contents, breaking glass and leaking liquids on the street and parking lots.”

They add, “Scavenging raises several safety and security issues. The City has received complaints of scavengers stealing recycling from side yards and garages. Customers also have concerns regarding identity theft, since scavengers may sort through mail and prescription pill bottles in recycling carts. The Police Department received over 200 calls regarding scavenging in 2013. A significant number of scavengers that officers made contact with have criminal records, some for identity theft crimes.”

It concludes, “Scavenging negatively affects the City’s State-Mandated Diversion Rate as scavengers will often move recyclables into the trash while searching for CRV. Recyclables placed in the trash are sent to the landfill and buried.”

The city’s FAQ, therefore, is roughly in line with the staff report; however, DWR’s language is not.

The city, of course, could have dealt with this, establishing thresholds for the enacting the ordinance and stricter penalties for organized crews in trucks, but instead made a blanket ordinance where the public is encouraged to turn in anyone who is scavenging, not just organized crews.

34 thoughts on “Who is Being Targeted in Anti-Scavenging Law?”