Krovoza Is Out; Wolk Is More Than 600 Votes Out Of Second

When Abel Maldonado recommended the blanket primary as a means to get more moderate candidates elected, the results in the 4th Assembly District last night – should they hold through the counting of absentees – are likely what he had in mind.

At this hour, the Wolk Campaign is assessing their position, but as of right now, the two Davis candidates are on the outside looking in.

District-wide, it is literally neck and neck, and for a time last night, Republican Charlie Schaupp and Democrat Bill Dodd were tied for first. At the close of counting at 3 am, Charlie Schaupp had exactly one more vote than Bill Dodd. But their split is immaterial as the top two face off in November, regardless of vote total. 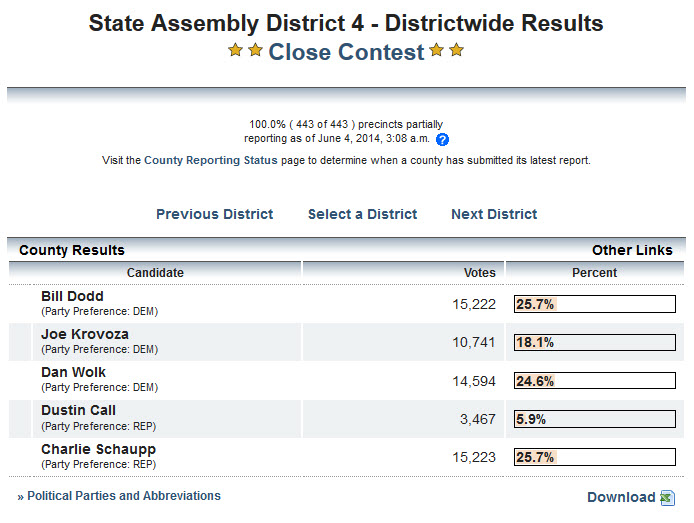 More importantly Dan Wolk finds himself 628 votes behind Bill Dodd, a margin of 1.1%. The margin closed as the night went on, but Mr. Wolk was never able to surpass the top two vote-getters.

Joe Krovoza, who often seemed out-manned and out-gunned despite raising a healthy amount of money, finished a distant fourth overall, just under 4000 votes behind Dan Wolk.

The Dan Wolk campaign and supporters will be quick to point the finger at Joe Krovoza for even running in this race. They will say that effectively split the vote in their stronghold. In Yolo County, Dan Wolk ran first by nearly 1000 votes over second place Joe Krovoza. 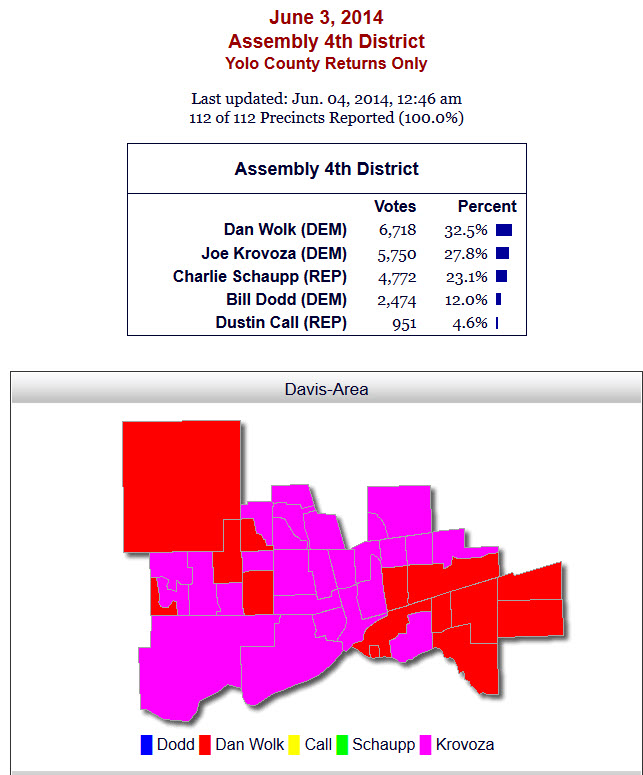 It was in Davis that was the most interesting. The Davis map shows Joe Krovoza capturing many of the progressive strongholds, with Dan Wolk winning only some of the more traditionally conservative areas of the city.

Napa County Supervisor Bill Dodd told the Vanguard, “I’m encouraged and I’m hopeful that the results stay where they are. I look forward to debate hopefully on the issues in November.”

Mr. Dodd said he was surprised by the level of Independent Activities in this race. At last check, the Opportunity PAC had pumped in about half a million dollars, both in support of Dan Wolk and in opposition to Bill Dodd. The FairPAC put in similar amounts in reverse.

“I could not believe the number that was thrown at me by the labor unions,” he said. “I still can’t figure out if it’s a pro-Wolk contribution or an anti-me.” He pointed out that he has done 17 labor negotiations with SEIU over 14 years without a single impasse.  He said that they have had fantastic collective bargaining with local unions, which has been “very positive.”

Bill Dodd felt that played a huge role in the outcome. However, he added, “Fortunately in the end, people were more concerned about a new direction in Sacramento than they were these ugly politics.”

Joe Krovoza issued a statement to the Vanguard: “This campaign has been an incredibly rewarding experience from beginning to end.  We advanced important conversations about the issues that matter most to communities across the district, informed by my service as mayor and career at UC Davis.  I am humbled by the amazingly broad support we received throughout the district and the grassroots network that carried the campaign for well over a year.  The legacy of our campaign’s values will guide me and others for years to come.”

Will Arnold from the Dan Wolk campaign told the Vanguard that he doesn’t believe the race is over, that “there are still a lot votes left to be counted.  We remain optimistic.”

“All the trends are in our favor,” he added.

One report puts the number of uncounted ballots in Yolo County at 7000.  The key question is how many are in the rest of the district. Dan Wolk really only has the advantage in Yolo County, and Napa County is just as huge an advantage for Bill Dodd as Yolo County is for Dan Wolk.   Time only will tell.