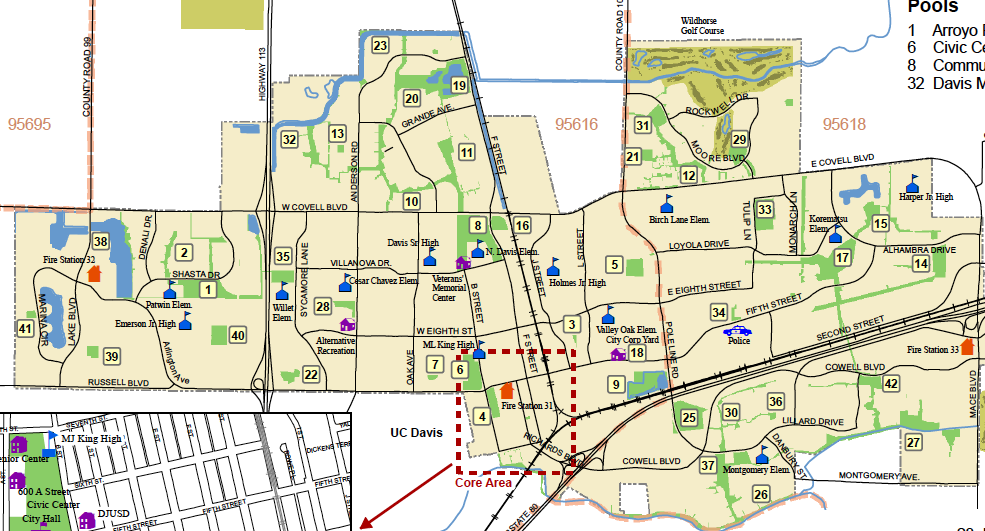 Earlier this week when we reported on the Paso Fino Infill development, the question arose as to how this was a city-wide issue rather than a neighborhood issue. While there are a number of reasons why it is a city-wide issue, the biggest issue that comes out of it is the fact that the city really does not have a policy for development on a greenbelt.

In the staff report, it noted, “The City does not have any specific guidelines regarding elimination of greenbelt parcels, or what to do when an infill densification project involves the potential to remove an existing greenbelt space. Therefore, this becomes a policy issue to be weighed by the City Council.”

As Community Development Director Mike Webb noted to the Vanguard, the greenbelt here is “not the typical greenbelt configuration” that the public would ordinarily envision as a long, city-maintained stretch of grass and vegetation that people can walk or bike through.

As developer Jason Taormino explained to the Vanguard, from his perspective, “the 2009 Staff report defines the land as a private buffer to benefit the Haussler property and protect them from the new homes that were built in Wildhorse in approximately 1998.”

“The greenbelt on the east side… that was created for the Haussler family, it wasn’t created for the Wildhorse subdivision,” Dave Taormino explained to the Planning Commission.

The fact that the city does not have a policy on greenbelts complicates this matter.

Marilee Hanson, also a Planning Commissioner, would add, “No one ever envisioned that the city would start selling off the Greenbelt.”

In order to understand why that particular point is important, we need to look at the history of greenbelts, most of which serve to link many of the city’s neighborhoods, parks, playgrounds, schools and shopping center.

A reader provided the Vanguard this week with a short description of greenbelts and their history in Davis.

Currently, “Davis requires all housing developers to integrate and finance greenbelts with each new subdivision.” Davis is presently the home of nearly fifty miles of greenbelt pathways.

In 1982, “developers Judy and Michael Corbett completed Village Homes, a conservation development that included an extensive network of pedestrian and bicycle paths. These paths linked homes with parks, community gardens, pocket orchards, offices, a community center, as well as a city bike path leading to the town’s major employer the University of California.”

The General Plan itself would seem to provide us with a good deal of guidance. Under normal conditions, even if there is not a prohibition against developing a greenbelt, there are guidelines as to the amount of open-space and residential land to be designated for use as a greenbelt.

The problem with setting a more specific greenbelt policy is that it is not clear that would have any more teeth than the current General Plan guidelines. They are merely guidelines, that the council can overturn in specific cases with General Plan amendments. There is a process to do it – but in the end, a majority of council can do so.

On Paso Fino, we have an unusual situation in that the city and developer both claim that this particular greenbelt, which is not typically configured, was designed to buffer the Haussler residents when Wildhorse was developed.

However, at least some of the neighbors question whether this explanation is accurate. They told the Vanguard that they have not been able to find documentation to verify it.

Regardless, even though there are clear provisions within the 2001 General Plan as to requirements for greenbelts and their percentage of land in a given project, we believe it would be wise for the council to establish policies on greenbelts for future development and infill purposes.

Given the small amount of infill space and the current lack of peripheral housing potential, there will be increased pressure for the city to densify even further and that puts greenbelts, parks, and other open space at potential risk for development.

Council action will not prevent a future council from undoing those agreements, but at least they provide the community with a guideline.

Share:
Tags:2001 General PlanCity of DavisGreenbeltsPaso Fino
Previous : Council to Ponder Next Moves on Innovation Parks
Next : Kids Caught At Border Deserve Due Process of Law

10 thoughts on “My View: City Needs to Address Greenbelt Issue”