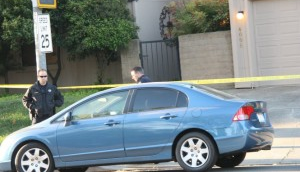 In what is now the third week of testimony in the state’s case against young Daniel Marsh, the defense’s medical witness, Dr. James Merikangas, would contradict the diagnosis given by the court-appointed psychologist, Dr. James Rokop. Dr. Merikangas is a neuropsychiatrist and neurologist with impressive credentials, from the Washington, D.C., and Bethesda, MD, areas.

Rokop, who testified for the prosecution, cast doubt upon the claim of insanity, stating, “Daniel may have over-played and may be using medication side effects for the reason behind the crime.”

Daniel Marsh is on trial for taking the lives of Oliver Northup and Claudia Maupin in their Davis home in the early morning hours of April 14, 2013.

Marsh, seen hanging his head and covering his eyes at moments, listened to the doctor testify about his diagnosis of Marsh.

Dr. Merikangas explained that the psychologists were not qualified to give an accurate assessment of Daniel. “They are not medical doctors, they did not examine his brain, his physical body or talk with him enough to know what was going on with him, and his psychiatrist just kept prescribing more meds,” stated the doctor.

He said he was hired by the defense to read the reports, to interview Daniel, and give a summary, analysis and diagnosis of Daniel.

Dr. Merikangas explained that Daniel suffers from manic depressive disorder, dissociative disorder, de-personalization and anorexia nervosa. But he stated, “Daniel does not have any evidence of anti-social or sexual sadism disorders, [there is] simply no evidence to support that.”

He said, “I disagree with their formulations all together, he has no history of sexual sadism and I have known sexual sadism patients and serial killers; Daniel does not fit the criteria.”

Deputy Public Defender Ron Johnson asked about the medications that Daniel Marsh had been taking and if he would have given them to him, “No, I wouldn’t have been giving those meds or any more meds – Daniel was in the wrong hands to be treated.”

Dr. He was Daniel’s Kaiser psychiatrist, and Dr Hesgard was also from Kaiser.

Dr. Merikangas stated that he would never have mixed Wellbutrin with Zoloft because they have the same side effects. “It is just wrong to give it with other meds, I would not have continued meds, you need to find out what’s going on,” asserted the doctor.

He explained that Daniel had suffered brain damage during birth, having to be resuscitated and losing oxygen.

He said Daniel’s MRI showed abnormalities and he felt that Daniel was having dreamlike episodes – and may have been under one at the time of the crime.

“He was in a dream state during the crime but did not know what he was doing until afterwards,” stated the doctor.

Dr. Merikangas testified the dreamlike state could last for hours to days, but no one would ever know that, besides Daniel.

He explained that Zoloft is 17 times more likely to cause increased aggression in children than in adults, causing them to become more violent.

“In fact, Daniel is much better since he is off meds,” Dr. Merikangas stated.

He said Daniel has several factors causing his mental health issues, not just one factor.

During cross-examination by Assistant Chief Deputy District Attorney Mike Cabral, Dr. Merikangas would tell him that he uses medications other than SSRIs [selective serotonin reuptake inhibitors] to treat depression.

DDA Cabral asked, “How about controlled substances and alcohol, can that cause side effects to be worse if mixed with SSRIs?”

“There are no studies done, don’t know,” replied the doctor.

Dr. Merikangas explained that Daniel’s truancy and disobedient behavior was due to drug and alcohol use, not an anti-social disorder.

He was questioned more by DDA Cabral about Daniel’s “dreamlike state.” Cabral asked, “So when do you think Daniel began his dreamlike state, was it after he stole the mask, after he sharpened the knife?”

“I don’t know, he doesn’t know, do not know the timing,” asserted the doctor.

“But he did a good job at concealing the crime, right?” Cabral asked.

“He didn’t conceal anything, he told two friends, he didn’t do a good job of it,” replied the doctor.

DDA Mike Cabral asked about the cuts to Daniels arms.

Dr. Merikangas replied, “Daniel’s cuts to his arms are signs of a suicide attempt, cutting his arm is a sign of aggression against oneself.”

The doctor would explain that most mass homicides end in suicide, reminding Cabral about the Columbine incident and others that ended in suicide. He asserted to Cabral that some of the people in those mass homicides had been using Zoloft.

But he stated that marijuana, over a period of long use, can affect the ability to think and remember things, but does not produce homicidal thoughts.

He said Daniel suffered from a lot of emotional and stressful abuse, but he agreed that drugs and alcohol could be a factor – just not the only factor.

Merikangas said, “Daniel told different things to different people but I felt him to be open and truthful with me.”

He stated that it is an interpretation of what Daniel tells doctors that are put into the notes, not facts.

“Black box warnings are from the National Institute of Health and were advice by the institute not to give out SSRIs to children,” said Merikangas.

Daniel was questioned by the FBI agent about what he felt as betrayal.

He explained to the agent that the cheating by his girlfriend, mom and sister made him not want to trust anyone, ever. He stated, “Betrayal sorta devastates me.”

He said the breakup with his girlfriend was due to her being “too mentally screwed up.” But it was one of the things which hurt Daniel.

Daniel spoke about his best friend and how the friend said that he just didn’t like Daniel anymore. But Daniel did not understand why.

He said watching his mom have seizures, and having to hold her each time to make sure she was okay, “kinda screws with your head.” He said, “I never knew if she was going to die, it scared me.”

Daniel continued, “I’ve had a whole butt load of hurts,” he said and laughed. He said his dad was not around much, and that he was mixing medication with alcohol and it was often hard to wake up.

But, Daniel stated, “a friend of my mom’s, Boris, took me to events and things and helped me cope with the divorce, sort of mentored me until he died.”

Daniel admitted to having a dark side, but asserted he would never hurt anyone. He said he had a dark sense of humor and a fascination with anatomy.

He talked about the four suicide attempts to the agent. But he said, “I attempted it, and if I can’t die, I’m not going to give up trying.”

When the agent asked about the things he put on his Tumblr account, Daniel explained them to be pictures that fascinated him about anatomy, “like, what would have done that, and how did that all come to play?” Daniel explained.

He said, “Every human being is always seeking affection, that’s what it is all about right?” “Yes,” answered the agent.

As the dialogue moved onto the night in question, the FBI agent would repeatedly say, “Daniel, there is no one who could have known the details of what happened in that house but someone who had to be in there that night, and two of your friends say you told them it was you.”

Daniel would repeat, “But I didn’t do anything, I would never have done that, I am just a kid, I do not know why they would f—-me over like that.”

Daniel, weeping, asserted that he had nothing to do with the homicides and that the story told about the killing of animals was really about his best friend.

He said he witnessed his friend choking a cat to death and throwing it away.

But the agent kept repeating the same questions, telling Daniel, “Now, Daniel, this is your time to heal, I am here to heal you, this is your refuge.”

Daniel continued, “I didn’t do it, I’ve gotten in fights, in self-defense…never killed anyone.” Daniel was sobbing at this point.

“Daniel, there is no one who would know the specifics, not even the police know things you know. This is an obsession, compulsion, you’ll feel complete relief if you tell me…You almost got away with it, it was a masterpiece, a work of art,” the FBI agent stated.

“You’re asking me to confess to something I haven’t done, I can’t tell you why I did something that I didn’t do,” Daniel said, sobbing.

“The person who was in there knew the details, left clues…” asserted the agent.

“But I swear I to you,” Daniel continued, sobbing. “Daniel, don’t swear, I am here to heal you,” replied the agent.

“YOU are not understanding me!” Daniel said, his voice getting louder. “I can’t confess to something I didn’t do!” he exclaimed, sobbing.

“All I know about this murder is what people told me…I don’t know why people are screwing with me,” Daniel asserted.

The viewing of the interview videotape continues on Tuesday morning.

Share:
Tags:Court WatchDaniel MarshHomicideNot Guilty by Reason of InsanityYolo County
Previous : What Was on the Minds of the Audience Members at the School Board Forum?
Next : Granda Speaks on Taxes and School Services