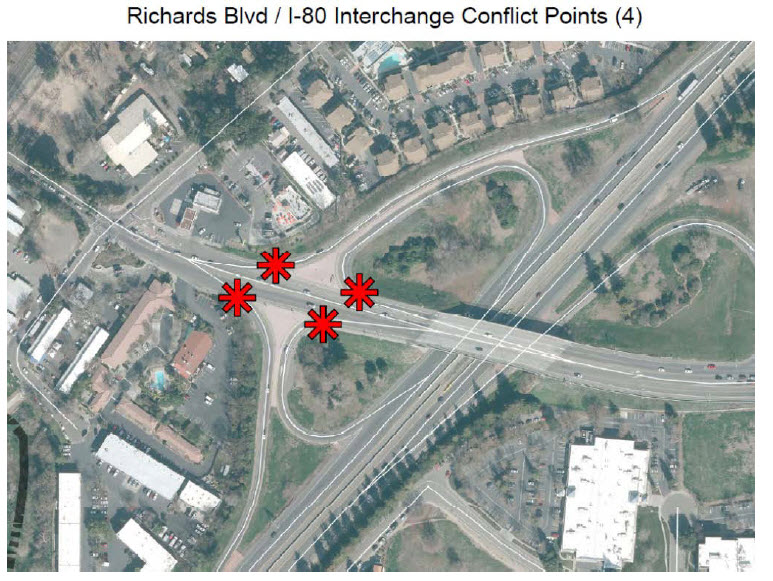 On the council agenda this week is a consent item that would allocate $160,000 in Roadway Impact Fee funds to cover the estimated costs to prepare the Project Study Report and authorize initial work on Richards Boulevard interchange improvements.

Staff writes, “The Richards Boulevard corridor is a major entry to the city of Davis as well as a key connector between South Davis and the downtown. Parts of the corridor were upgraded in the 1990s, but other areas are sub-optimal for all types of travelers.”

“There are currently four uncontrolled conflict points between bicyclists and vehicles due to the configuration of the I-80 Westbound ramps,” they continue.

“The most severe of these weave movements occurs on northbound Richards Boulevard at the I- 80 Westbound off-ramp. Pedestrians crossing the on- or off-ramps cross high-speed vehicles in uncontrolled, unmarked crosswalks. Vehicles from the off-ramps that merge with Richards Boulevard traffic must look over their shoulders at a tight angle to judge gaps in traffic, all while paying attention to the signal at Richards Boulevard/Olive Drive and avoiding bicyclists on Richards Boulevard,” the staff report continues.

This description underplays the problem of a large quantity of traffic being forced to merge during the morning commute times into stopped traffic going through the underpass.

This creates a hazard. “Between 2003 and 2012, 15 collisions at the Richards Boulevard interchange north of I-80 resulted in an injury. Five of these collisions involved bicyclists.”

As the city has initiated public discussion over the Nishi Gateway concept, “local traffic –particularly Richards Boulevard – has risen as a key issue of public concern. In addition, regional growth which has and will continue to generate trips to and from Davis will further cause impacts to the interchange.”

The city has begun exploring options for improving the corridor, including the I-80 interchange.

Over the past decades, “the City has evaluated possible improvements to the Richards Boulevard Interchange that would eliminate the free right turns, reduce the “weave” movements, and improve comfort and safety for users of various modes.”

One option that staff suggests “is a “tight diamond” with on/off ramps similar to those on the north side of the Mace Boulevard interchange. Improvements to the Richards interchange are included in the SACOG Metropolitan Transportation Plan, but unfunded and with a current schedule date of 2020 (planning) and 2022 (construction).”

Staff adds, “In early 2014, the City requested federal planning funds for a series of potential improvements to the corridor, including design for the interchange improvements. Unfortunately, the application was not chosen for funding. Staff is proposing that the City authorize initial work on the interchange improvements to facilitate future applications for funding and provide cost estimates for evaluation with future CIP decisions.”

The development of a Project Study Report (PSR) project initiation document provides a key opportunity for Caltrans and involved regional and local agencies to achieve consensus on the purpose and need, scope and schedule of a project, staff writes.

They add, “Developing a Project Study Report is a collaborative effort. The PSR is used to estimate and program the capital outlay support cost necessary to complete the studies and work needed during the Project Approval and Environmental Document phase.

“The Cooperative Agreement begins the Caltrans review process of a proposed project. The City would be required to provide a $30,000 deposit to cover Caltrans costs for reviewing the PSR. Any funds not used during the review will be refunded to the City.”

Improvements are definitely needed with the interchange, as the current configuration makes very little sense. However, part of the problem is also the quantity of traffic being pushed under the Richards underpass and that will only increase should voters approve Nishi – depending on how its traffic models are developed.

From anecdotal observation, it appears that a large quantity of traffic heading through the underpass turns left onto 1st Street and either onto campus or up B Street. Finding an alternative pathway to campus might be a better approach in the long-term to the traffic congestion.

However, regardless of traffic congestion, the configuration of traffic that exits onto Richards and heads northbound needs to be altered.