In October of this year, Yolo County District Attorney Jeff Reisig announced that his office has created “a Conviction Integrity Unit to review all post conviction assertions of innocence.” In the press release, the DA wrote, “As the United States Supreme Court recognized in Berger v. United States, the aim of the prosecutor ‘is that guilt shall not escape nor innocence suffer.’”

The release continues, “While the trial and appellate process has significant safeguards to protect individuals, the criminal justice system is a human institution and mistakes are made in a small number of cases. To combat these wrongful convictions, prosecutors and law enforcement agencies throughout the country have broadened their efforts to review previous convictions to ensure that justice is served and that those wrongfully convicted are exonerated.”

Prosecuting attorneys in districts from Santa Clara County, California, to Washington, D.C., began establishing the units after DNA evidence led to a rising number of exonerations, the Center reports.

The white paper entitled “Conviction Integrity Units: Vanguard of Criminal Justice Reform,” outlines the structure and administration of the 16 conviction integrity units now existing in the U.S. The report reveals that the nine units established by the end of 2013 accomplished nearly 7,000 case reviews, resulting in 61 exonerations.

Gina Lauterio, Program Director of the Center for Prosecutor Integrity, said the report is the first to reveal how the number and effectiveness of the units has grown in recent years. “I hope that all District Attorneys in the country will consider what’s being done in these 16 districts and adopt similar practices.”

Lauterio noted the nonprofit Center encourages scholarship on the causes of wrongful convictions and efforts to minimize them. “We commend the growing number of prosecutors who are now devoting resources to reexamine questionable cases.”

As Innocence Projects have proliferated across the country, leading to an increasing stream of exonerations, data has emerged which has enabled researchers to start identifying patterns and pinpoint causes of the wrongful convictions.

The National Registry of Exonerations reported that 47 percent of wrongful convictions could be attributed to misconduct by prosecutors and other officials.

As the Center for Prosecutor Integrity notes, “Calls for reform could no longer be ignored.”

They argue, “One of the most promising corrections has been the establishment of post-conviction review programs, commonly referred to as Conviction Integrity Units (CIUs). Conviction Integrity Units are entities located within District Attorneys’ offices that are designed to investigate claims of wrongful convictions. Many of these units have also developed policies designed to reduce future false convictions.”

It is interesting to note that, while they highlight 16 Conviction Integrity Units in existence  – including six established in 2014 which have been in existence for a relatively short period of time – they do not include Yolo County in the list.

The white paper notes, “The Santa Clara CIU affords one approach, where DA Jeff Rosen emphasizes that prosecutors are evaluated not only on their win-loss records, but also on sound case selection and even willingness to abandon cases that have already been charged. Rosen gives his prosecutors an award for exemplary work.”

They add, “Because DNA cases represent ‘low hanging fruit’ for uncovering false convictions, many units only accept such cases.” They do note that most are “willing to reinvestigate cases where the convicted pled guilty.”

There are some interesting stipulations, for instance, “The Manhattan CIU only accepts cases in which defendants hold to the same theory of innocence as at the time of their trial.”

The Cuyahoga County Unit imposes a rigorous requirement before accepting a new case: “The convicted offender must waive his or her procedural safeguards and privileges, agree to cooperate with the Unit, and agree to provide full disclosure regarding all inquiry requirements of the Conviction Integrity Unit.”

How effective are the units? They argue, “The effectiveness of a given Conviction Integrity Unit can be gauged by examining the policy changes it has implemented, as well as the number of case reviews performed and exonerations achieved.”

They note, “Building on their efforts in seeking to exonerate the innocent, a number of CIUs have identified and implemented office-wide policies to improve the accuracy of future verdicts. For many units, information about newly-implemented policies has not been made publicly available.”

Finally they note, “The effectiveness of a given CIU can also be gauged by the number of case reviews and exonerations.”

They find, “Over the seven-year period, the nine Conviction Integrity Units reviewed a total of 6,933 cases.”

They add, “The nine CIUs are credited with 61 exonerations. The Dallas County Unit has registered the largest number – 33 since its founding in 2007. For the newer units, more time is needed to weigh their effectiveness in achieving exonerations.” 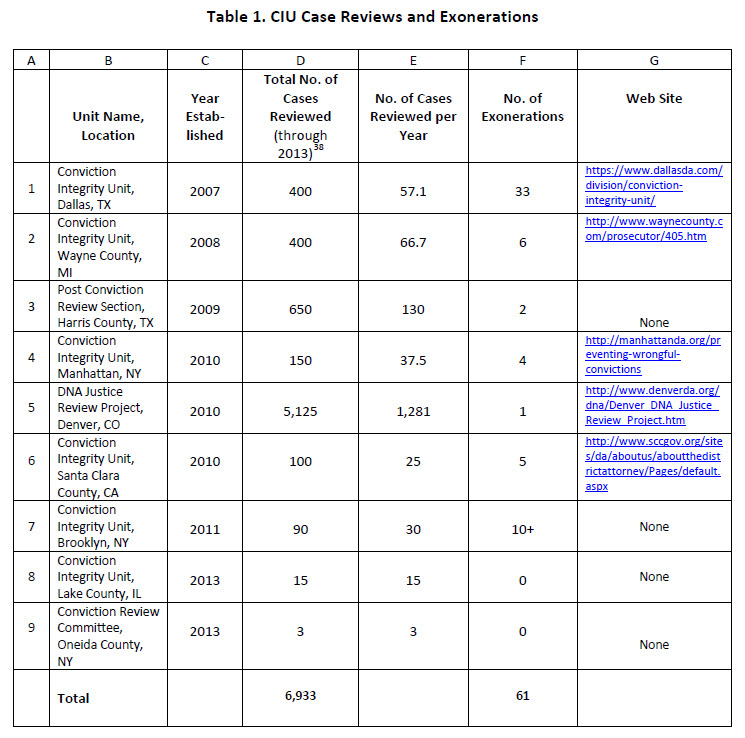 They find, “Variations in the number of reviews and exonerations can be explained by a number of factors including availability of resources, case selection criteria, local legal requirements, and external demands from the media, lawmakers, and public officials.”

They add, “By virtue of being situated within the prosecutor’s office, Conviction Integrity Units must manage a delicate balancing act. In order to properly pursue their case reviews, CIUs must enjoy a certain level of administrative independence from the rest of the office. Simultaneously, the units must also engage the support of others in the DA office in order to implement policy changes.

“Budget pressures can engender intra-office conflicts. Heavy caseloads may impede effective working relationships. Another challenge arises when a CIU decides to re-evaluate a conviction won by a prosecutor still employed in the DA’s office.”

The paper concludes, “Conviction Integrity Units represent a welcome development to the cause of ensuring conviction accuracy. They are an implicit acknowledgment that wrongful convictions are not as infrequent as persons once believed. They provide an official avenue by which post-conviction claims of innocence can be investigated and resolved. And they represent a venue in which new prosecutorial approaches can be developed and tested.”

“While skeptics may view CIUs as mere political ‘window dressing,’ others hail Conviction Integrity Units as a harbinger of broad-based criminal justice reform,” they write.

Jeff Blackburn, founder of the Innocence Project of Texas, has remarked, “In ten years we’ll look back and say we began a process in Texas that fundamentally changed attitudes about the whole meaning of justice in this country.”