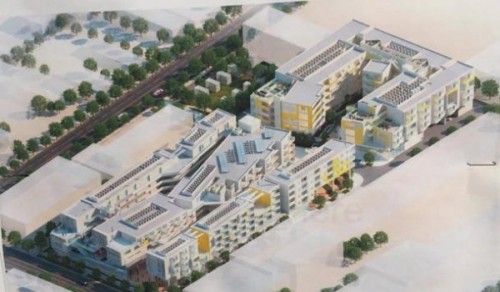 (Editor’s note: Originally published in July 2015 in the Santa Monica Daily Press. Reprinted by permission of the author via a Davis resident “Just outlining events in the City of Santa Monica and warning of the danger to Davis if Dinerstein and the Sterling Apartment complex get an OK from our council-members and staff.”)

Philosopher Alain de Botton wrote that “bad architecture is a frozen mistake writ large. We owe it to the fields and trees that buildings we cover them with will stand as promises of the highest and most intelligent kinds of happiness.”

But the Village Trailer Park is a sad story of 99 low income mobile park residents — city employees, nurses, mailmen, teachers, elderly, some disabled — living quietly, and happily, in a park-like setting amid a grove of mature trees and now being uprooted from their homes. Forever.

Unfortunately the Village Trailer Park, a 65-year-old community that few people even realized was there, is being displaced by the Millennium East Village, a 4-acre, 5-story behemoth of a project. In 52 years of professional practice, I have never witnessed a failure in a city planning process as egregious as that which has destroyed the VTP community and will cause enormous negative impact on the adjoining residential neighborhood.

In 2005, Mark Luzzatto, a Santa Monica resident, purchased the VTP for $4.5-5 million and set about lobbying the City to change “residential mobile home park” zoning to “mixed use creative.” Early in the design process, both Planning Commission and City Council asked to see a Tier 2 reduced density alternative. What was approved instead was a project with substantially greater density — 377 units and a height of 5 stories. Instead of rejecting this greater density, planning staff produced a 290-page document justifying the developer’s design over that requested by the City Council.

So our city, which prides itself on social justice, approved a Development Agreement (DA), which allows building in excess of permitted zoning, evicting 99 very low-income tenants. The developer was then allowed to double height and density, creating more traffic in trade for 38 low-income units while the city collected 5 cents on the dollar in community benefits.

Adding insult to injury, in 2013, the owner sold his approved Development Agreement (without even a shovel in the ground) for a modest profit of nearly $60 million! The new owners (the Dinerstein Company), made aware of major problems in the approved design, hired a local architect to correct the flaws, and instead he completely redesigned the project ‚Äî but the new design was even worse.

It was at this point in witnessing this surreal process that I took on what the city refused to do and appealed the DA approval. For the new design not to go back to the Planning Commission for review, the changes had to be deemed “minor modifications.”

There were four specific issues that are anything but “minor” and I felt needed to be addressed:

Unbelievably, none of these four significant changes were considered “major” enough to warrant a new approval process — even though the planning director recently described “minor modifications” as “a procedure used to avoid unnecessary processing when modifications on the order of 6-12 inches and affecting only a neighbor and not a neighborhood.”

This is an inexcusable abuse of power and a blatant slap in the face to the community. The Dinersteins were still concerned that I could appeal this decision in court. A series of five or six meetings and numerous phone calls ensued over four months and resulted in my withdrawing the appeal based on the following revisions:

Do these changes help? Yes! Do these changes make for a successful design? Unfortunately, far from it. Although I reached an agreement with the new project owners, this settlement provides nothing more than a Band-Aid, on a massive project far in excess of what’s appropriate for this site and has no place in our city.

The real tragedy; however, is the process that allowed this to happen. There’s no reason I was able to bring about these improvements when the City should have done even more. This is the City’s job! But this has been an unbelievable failure on the part of City Council, Planning Commission, Architectural Review Board, the project’s new architect (incidentally, a former chair of the ARB) as well as the city’s planning, legal and administrative staffs.

In hindsight, here are three conclusions that can be drawn from this travesty a complete failure of the planning process and one of huge proportion in our pocket-sized city of 8.3 square miles and 92,000 residents:

If our City is unable to do a better job representing its citizens, perhaps it is time for residents to enact initiatives ensuring that our codes and powers are not so easily abused, or as in this case, neglected.

11 thoughts on “A Travesty Of Planning Proportions”