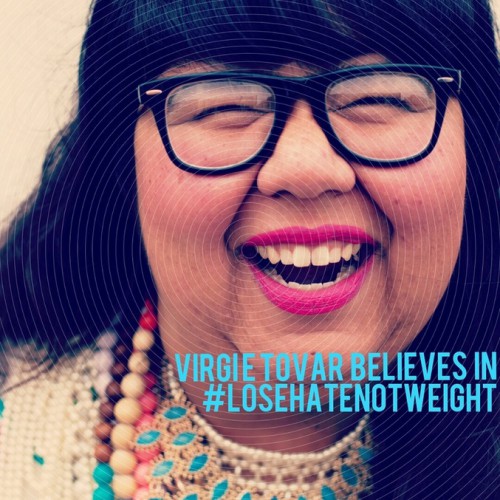 Often called the last socially acceptable form of discrimination, fat shaming is ever present in society. From lack of representation to biased treatment, heavier people often testify to being treated like second class citizens. Even James Watson, Nobel Prize winner and founder of the modern DNA structure, was quoted as openly saying “Whenever you interview fat people, you feel bad, because you know you’re not going to hire them.”

Yet, biases against overweight people have yet to be outlawed in America. It’s acceptance as an official form of discrimination is still widely debated. But all that may soon change. For the last several years, former Aggie turned advocate Virgie Tovar has been dismantling fatphobic arguments and empowering full figured people everywhere to love themselves and their bodies.

Now a household name in the body acceptance movement, as well as a leader in the war against food shaming and fatphobia, Virgie Tovar has been featured in The New York Times, MTV, The Ricki Lake Show, Yahoo Health, Buzzfeed, and Cosmopolitan- just to name a few. Equipped with her slogan “Lose Hate Not Weight” Tovar has been a forerunner of the anti-dieting movement and has shed light on the realities of ‘fat shaming’, or bigotry against people that do not fit the mainstream, unrealistic expectations of size and shape.

Her book Hot & Heavy: Fierce Fat Girls on Life, Love and Fashion has reached a worldwide audience. But long before becoming an inspired writer and a national anti-fatphobia activist, Virgie Tovar was just an 18-year-old freshman at UC Davis. While many students find empowerment and community at Davis, others find it to be a campus marked by exclusivity. Virgie experienced the latter.

“When I was there it honestly did not feel like an inclusive place. At least it did not feel like a place where I belonged. I wanted to live in the dorms with other Davis honor program students, but I ended up getting assigned to the suites off-campus and that was horrifying. It was like Laguna Beach, and I wanted Glee. I went from a working class/lower middle class, mixed race suburb in the Bay Area to the super white UC Davis campus and I was thrown head first into some scary culture shock. It was not the welcoming environment I’d come to expect growing up. I felt almost unwelcome.

“I didn’t have the language to express why I felt so alienated for the first time in my life, but I sensed it had something to do with being a fat brown Mexican girl. So I turned to activism hoping to articulate an explanation for what was happening. I started attending meetings run by Latino students who taught me about racism and classism. Even though I grew up in a Mexican household I didn’t have an explicit racial identity before I began at UC Davis.

“But I realized in my freshman year that I couldn’t stay at UCD. Being at UCD was the first and only time in my life that I felt deeply, deeply ostracized. I know this is going to sound harsh, but when I transferred out of Davis that feeling went away immediately. I went from an outcast freak trying to cope with being outright pushed out of nearly every social situation at UCD to being treated like I was a smart, funny, interesting woman with important opinions at Berkeley. It was really a night and day experience for me.” A change for the better and the birth of a new movement in body acceptance.”

But amidst the isolation and the restrictive membership, there were also some positives. “I was lucky to meet some really incredible, committed faculty like Antonella Bassi in the Italian department and Stefano Varese in the Anthropology department.” Despite the good impacts of some, Virgie describes fatphobia as an outstanding problem in Davis. In fact, mean comments from her male peers in the marching band made her drop out mid-season. But, as Tovar describes, fatphobia is not limited to the spoken word.

“It’s important to expand people’s notion of what fatphobia actually looks like, often it’s not explicit or interpersonal. For example, a lot of people think that fatphobia is only the act of bullying or using discriminatory language against someone because of their weight. The truth is there are many instances of fatphobia that are much more subtle and institutional – for example, the size of desks in classrooms can often be prohibitive, the durability of chairs at lectures or meetings can cause stress (sometimes fat people feel uncomfortable in those flimsy fold-out chairs), going out to restaurants can cause anxiety about being unable to sit comfortably in a booth and this may cause fat people to self-isolate and socialize less. Then there are the realities that people often have less interest in being friends with or dating fat people due to social stigma. These are all instances of fatphobia.”

Yet the fatphobia movement is not without its critics. In a biomedical health culture based off of BMI, some people believe that body acceptance advocates unhealthy lifestyles. But Virgie Tovar challenges the concept of health as being strictly corporeal. “I recently gave a talk to about 60 kinesiology undergrads at SF State, and I gave them 3 minutes to write down the definition of health. What was incredible was that no two definitions were the same – and you’d imagine that kinesiology students would be better equipped than the average person to define health. How can we as a nation be so committed to something that we can only vaguely define? I believe that any worthwhile or useful understanding of health must recognize that it is holistic, and mental health is extremely important when it comes to overall wellness. Mental health is best achieved when people don’t have a pathological relationship to food or movement.”

Another common critique of the anti-fatphobia movement is that it builds up full figured people at the expense of smaller bodied people. However, as Tovar explains, this belief reflects a misinterpretation of the movement itself. “I think it’s important to recognize that fatphobia affects all people. Women in particular get treated as if our bodies are public property. I don’t think it’s ok to shame anyone because of their body size, but I think the idea of ‘skinny shaming’ is often used to derail meaningful conversations focused on the stultifying realities of fat people’s lives and experiences. Just like any meaningful conversation about justice, when we discuss body size we must recognize who bears the brunt of a particular injustice and we must prioritize their lived experience.”

Virgie is known for her outreach work in the community, which now includes a 4-week virtual program called Babecamp that focuses on breaking up with diet culture. Her program instills in her students an embodiment of her positive affirmation: “I deserve to live a life of free of discrimination and hatred regardless of whether I’m fat or thin, healthy or unhealthy.”

As far as advice to people in Davis feeling the sting of fatphobia? “If people are experiencing alienation on campus I’d like to recommend that they spend a month or two trying to find like minded people. Looking up organizations on campus is way easier now than when I was an undergrad. Failing that, considering relocation is worthwhile.”

For more information about connecting with Virgie, joining her empowerment program, or to find out about body positive support on campus, follow the links below.