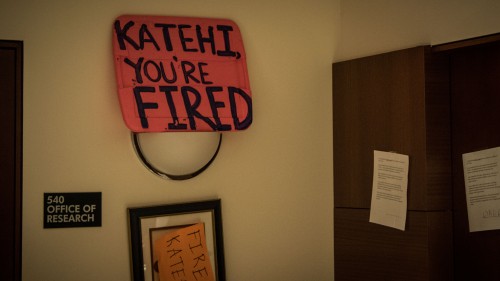 “Linda Katehi has demonstrated her disregard for the values of public education.”

The UAW 2865 Joint Council passed a unanimous resolution calling on the UC Office of the President and the UC Regents to dismiss UC Davis Chancellor Linda Katehi. The call comes after revelations that Katehi served in a compensated position at textbook company Wiley and Sons for two years while also working as Chancellor, receiving almost $420,000 in wages and stock options from the private company.

Last week, Katehi also accepted a paid position on the board of for-profit education outfit DeVry, then resigned amid public outcry.

The resolution by the Academic Workers union, representing 13,000 teaching assistants, graduate instructors, and tutors in the UC system, argues that both of these board appointments represent a conflict of interest for Katehi. Wiley and Sons, as a major textbook supplier, has reason to seek influence within the UC system, and the massive compensation given to Katehi is therefore suspect. DeVry is at the forefront of efforts to erode public education by providing for-profit alternatives.

“Private companies don’t share the goals of the University of California. The UC should be about creating opportunities for people, but DeVry, along with other for-profit colleges like Corinthian and Trump, are just about making money,” said Jeb Purucker, a UC Santa Cruz graduate student and elected representative to the union’s Joint Council.

At Davis, several dozen protesters have been in Katehi’s office for three days, demanding that she be fired and replaced. “It’s my job here as a TA to advocate for students. My students are working-class and people of color. They are the ones that are mostly affected by Katehi basically incentivizing our tuition and expensive textbooks,” said Marco Rosales, a Ph.D. student in the history department.

Duane Wright, a sociology graduate student and union member, said that Katehi represents extreme wealth inequality between upper administrators and workers in the UC system. “I make less than $20,000 and my tuition is paid because I have a union, but I still have to take out loans to pay my rent. I don’t have an extra job where I can moonlight and make an extra $400,000,” said Wright.

In addition to calling for the firing of Katehi, the resolution demands “a process of selection and approval of her replacement by a democratic council of students and workers.”

REMINDING all members of the UC community that Linda Katehi has a history of involvement in corruption and influence peddling in higher education, dating back to her previous position at the University of Illinois.

FURTHER RECALLING that Katehi irreparably damaged her relationship with students and workers at UC Davis by ordering police violence against student protesters in 2011.

WHEREAS Katehi compromised her chancellor position by accepting a board appointment and would-be monetary compensation of $70,000 from for-profit educational outfit DeVry, whose goals are at odds with the mission of the University of California.

WHEREAS Katehi accepted a board appointment and received compensation valued at $420,000 from private textbook vendors Wiley and Sons, who have reason to seek her influence for private gain.

NOTING that the acceptance of these appointments represent a clear conflict of interest and lack of judgement.

CONVINCED that Linda Katehi has demonstrated her disregard for the values of public education.

BE IT RESOLVED THAT THE JOINT COUNCIL OF UAW LOCAL 2865:

CALLS on the University Office of the President, as well as the UC Regents, to remove Katehi as Chancellor of UC Davis.

DEMANDS a process of selection and approval of her replacement by a democratic council of students and workers.

Share:
Tags:Linda KatehiUC DavisUC Davis WorkersUnion
Previous : Call Time Out on Hiring a New AD at UC Davis
Next : Council Weighs How To Proceed on Hotels