If university officials were of the belief that the protest and occupation of Mrak Hall would fizzle out, Monday’s passing of the one-month anniversary underscores their miscalculation.  If anything, Monday proves that the protest is here to stay and that the university must change its approach if it wishes to have use of much of the Fifth Floor of Mrak Hall.

On Monday evening, the Vanguard was invited to join as many as 30 or 40 of the protesters for a one-month celebration and dinner. The message, talking to the protesters, was clear – they are not going anywhere.

While the evening was mostly informal with some levity – the cake with the writing, “Bye Katehi” – the protesters gathered around for a period of reflection, where one by one they spoke.  The overall theme was that, for them, this was an issue of critical import, they feel that the university’s mission has been co-opted and the controversies surrounding the chancellor are an embodiment of it.  They are offended that a chancellor making over $400,000 would need to make money on the side.

But this was also a very personal moment.  It is clear that there were moments of hardship and doubt along the way.  It was a moment to express camaraderie and a common purpose, with a period of personal growth and struggle.

Privately, some of the protesters explained that they are doing their best to keep up with their coursework.  That they are rotating people in and out, trying to keep a critical mass.  Many are struggling with attending enough classes to keep up.

In contrast to accounts by the university and in the media, they seemed humbled by this experience.  They were less bombastic and angry than introspective. 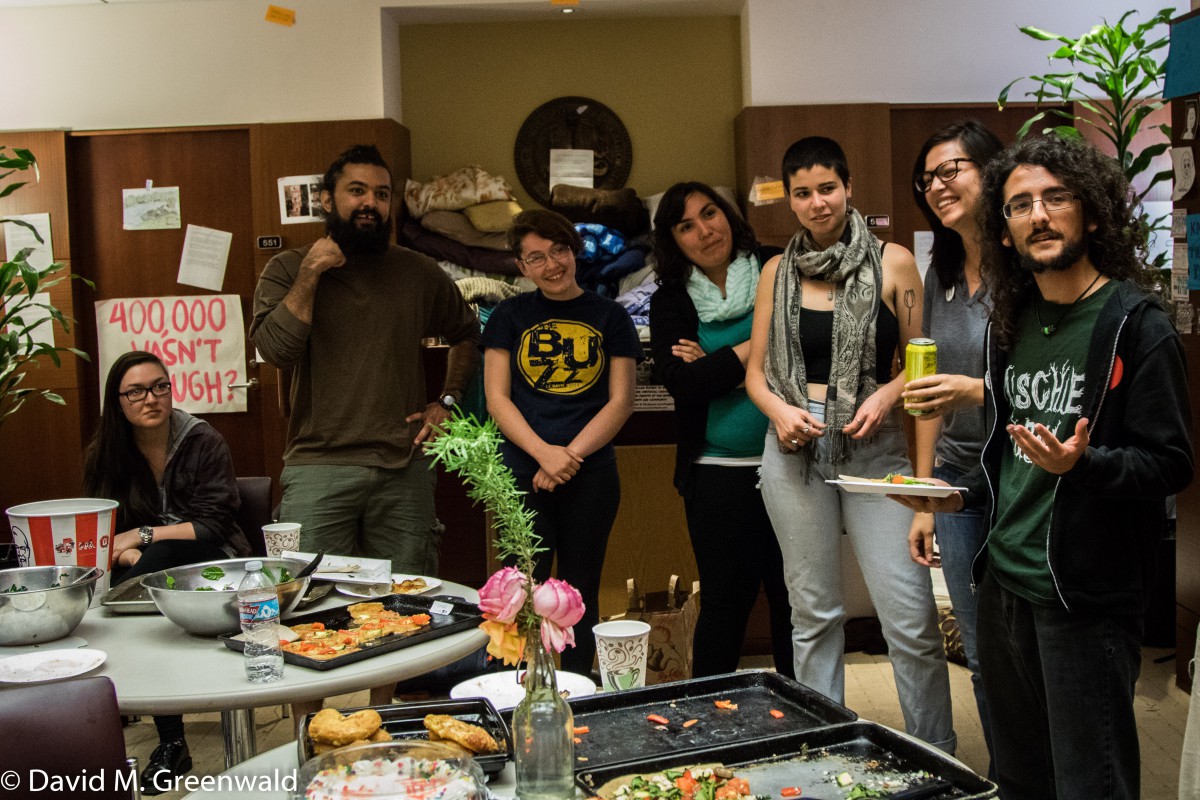 On Monday morning, they released an open letter to President Napolitano, marking the 32nd day of occupation:

Over the past 32 days, our coalition of UC Davis students, workers, and community members has conducted marches, rallies and a sit-in protest calling for Linda Katehi’s resignation. We have received support from multiple California legislators and 39 statements of solidarity from Davis faculty, students, workers, labor unions, and community groups. Finally, the recent legislative hearing evaluating the integrity of Katehi’s actions and their implications for administrative policy across the UC and CSU systems, underscored our assertion that there is no realistic justification for Katehi’s conduct. Administrators at UC Davis have proven themselves incapable of appropriately responding to this situation, and have failed to hold themselves accountable to the students, workers, and faculty they are supposed to serve.

While Linda Katehi has sent other administrators, students, and faculty to try to schedule a closed and exclusive meeting, she has repeatedly refused our offers for a meeting in a transparent, open, and accountable space. Those actively protesting in the lobby of Katehi’s office have dismissed the option of such a closed meeting for multiple reasons. First, such a meeting would continue to represent the voices of only a few and would defeat the intention of holding Katehi accountable to the entire student body and campus staff. Second, due to the active threat of academic dismissal and police intervention being held over us, the power differential inherent to such a meeting would be an insurmountable barrier to meaningful dialogue. Third, there is a long history of closed dialogues between campus activists and top UC Davis administrators being ineffective in the long term. Finally, after the Assembly Oversight Hearing on Conflicts and Abuse in the Outside Employment of UC and CSU Executives conducted on Monday, April 4th, Chancellor Katehi proved her own ineptitude and inability to explain her transgressions and take responsibility for her actions. After that display, it has become clear that a dialogue with her would provide no novel information, and no promise for instituting change.

While thousands of students, workers, faculty, staff, and community members joined the movement calling for Linda Katehi’s resignation and expressed their dissatisfaction with her performance as Chancellor, Katehi’s own distance from and disregard for the needs and safety of UC Davis students and workers have only become more pronounced. We believe that this is more than just a problem with Katehi; it’s symptomatic of a deeper trend of disconnection and diminished accountability resulting from the continuing process of privatization in the UC system (and higher education in general). As the structure of the university shifts toward a profit-oriented model, the UC Regents and local administrators gain an increasing financial incentive to disregard the economic interests and physical and mental health of the students and workers in their charge. This is unacceptable to us, and violates the spirit of community support and pursuit of knowledge upon which the UC system was founded. Accordingly, this is about more than just seeing Linda Katehi removed from office. This is a demand for larger structural changes that democratize decision-making processes and re-center the well-being of the students and workers of the UC Davis community as the top priority for campus administrators.

Given the demonstrated incompetence of the UC Davis administration, we call on the Office of the President today to step in and demonstrate what accountable and transparent leadership looks like. We ask first that you exercise your authority to fire Linda Katehi pursuant to Regents Policy 7077, which she violated when she accepted a paid position on the board of DeVry Education Group without approval from the Chair of the Board of Regents. Secondly, we ask for you to meet with the protestors here at UC Davis and work with us to resolve the underlying problems with the administrative structures at UC Davis, and across the entire UC system. In accordance with the concerns about transparency and accessibility we mentioned before, we ask that the meeting be conducted in a format open to as many of the protestors or other associated community members as can make it, and that we be allowed to record the proceedings.

Please respond promptly, as students, workers, and faculty are at risk.

The Protestors at Mrak Hall

85 thoughts on “Protesters Mark One Month of Occupying Mrak Hall”