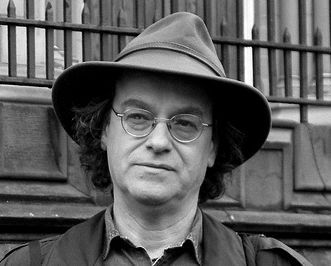 Longtime political activist, author and Nobel Peace Prize nominee Kevin Annett will be making his way to California for a speaking tour that aims to educate people about the continued degeneration of native rights in Canada. His tour sources the many points raised in his newly published books, Unrelenting and Murder by Decree, and will include three appearances in Sacramento and one in Davis.

Annett has been a figure in the Native American rights struggle for many years, often working alongside native tribes to expose corruption, abuse, racism, and historical injustices. A pastor with anthropological training, Annett lived briefly in a native village in northern British Columbia which afforded him an intimate view of the poverty and lifestyle of indigenous Canadian communities. Annett encountered anecdotal oral histories of the atrocities, which were corroborated by archival documents he discovered when studying for a PhD – an endeavor which was revoked due to a sudden pull back on funding for native historical research.

Although this seems suspicious, Annett notes that cover ups are an integral part of church law, in which taking up an issue outside of church authorities could lead to excommunication. He actualized these concerns while employed for the St. Andrew’s United Canadian Church and made native rights a focal point of his sermons and community work. His focus on church abuses perpetrated on native children led to his firing in 1995, and what he describes as a campaign of personal attacks against him led by the church and state, which ensued in an attempt to slander his research and deflect from the historical realities he brought to light.

While Annett recognizes that his work is surrounded by a sea of controversy, he notes that he has yet to meet an individual who could show any degree of proof to refute his claims. Among Annett’s main declaration is the assertion that the Canadian church has assisted in the mass killing of native children at residential schools, a claim that was officially supported with documentation in 2015.

Approximately 6,000 native children died under the care of the church in schools that were set up to “kill the Indian, save the child,” although the exact numbers remain unknown. Historical records were brought into the public arena around the same time that the UN released a report admonishing the Canadian government for its mistreatment of indigenous populations. Even today, thousands of native women and children come up dead or missing in what many have regarded as an extension of native genocide that began since the European conquest of the Americas. 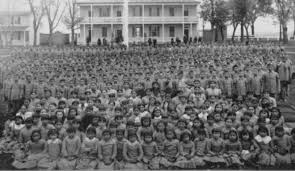 Annett draws similarities to the underlying policies of murder, segregation and otherization that occur in the United States with other ethnic groups. He notes how most waste dumps are near a black, Chicano, or native community – and uses as a specific case study the uranium mines in South Dakota near native lands, which have resulted in high cancer deaths in autochthonous people due to radiation leakage.  In regards to the appropriation of native fashion, narratives, and lifestyle, Annett comments, “We like to keep Indians at an arm’s length, so we don’t really see how their living. We don’t see the sterilization programs, the poverty. It’s an exoticism without an understanding of the reality. It’s a museum mentality that invokes historical fantasies of peace and nostalgia, with no talk of contemporary native culture.”

Current issues affecting native populations often go undocumented. Native families sitting on valuable land often get evicted or go missing. Imprisonment, poverty, and the death rate from tuberculous is as high as they historically ever were. A high number of native children are taken away from their family and put into white foster homes, and the Child Protection Agency does not have to give grounds for taking children. Annett notes, “Canada is one of the few places left in the world where indigenous people are not full citizens under the law. It’s an apartheid system. “

While child trafficking is a big global industry, Annett regards Canada as a reflection of this global network.  His experience in the field has led him to the conclusion that crimes against native people are just as prevalent today as they were before.

“The crimes are not over; they are carrying on. Murder, rape, kidnapping, poverty, segregation, discrimination.  These are crimes by the institutions not just individuals. They can be seen in the high poverty levels and death rates of aboriginal peoples. Native women disappear without a trace, and nothing is done for accountability. I’ve seen the degree to which the church and state have tried to halt my work through methods of intimidation, and it just makes me realize – if they would go this far to stop the truth from coming to light, imagine what they’re capable of – what they did to native children.”

The church has never officially apologized for the crimes. The first legal rendering of the case placed blame on both the church and government, but the state absorbed the lion’s share of the responsibility. Annett finds the state sentiments of regret to be insufficient. “It’s easy for the state to say I’m sorry, but how does that undo the atrocities brought about by these institutions. They still continue. They’re happening today.”

Annett’s unyielding lifelong aim to expose state sponsored violence has made himself the target of alleged smear campaigns. He regards it as simply the nature of the beast. “It’s not me that’s the controversy, it’s what I’ve raised. It’s a very common reality for whistleblowers who take on the church, state, or corporations because it’s hard for people to psychologically accept the difficult truths I have proven, it’s easier to attack the man. But I know that I am standing on the truth and I’m doing the right thing. Critics rely on name calling and innuendo, but neither the Church nor the government have sued me or have produced counter evidence. [To any critics] I say ‘talk about the evidence, show me where I’m wrong.’”

Guests are welcomed to join Annett on Wednesday, April 27, 7 – 9 pm at the Davis Community Church – it is a free event. 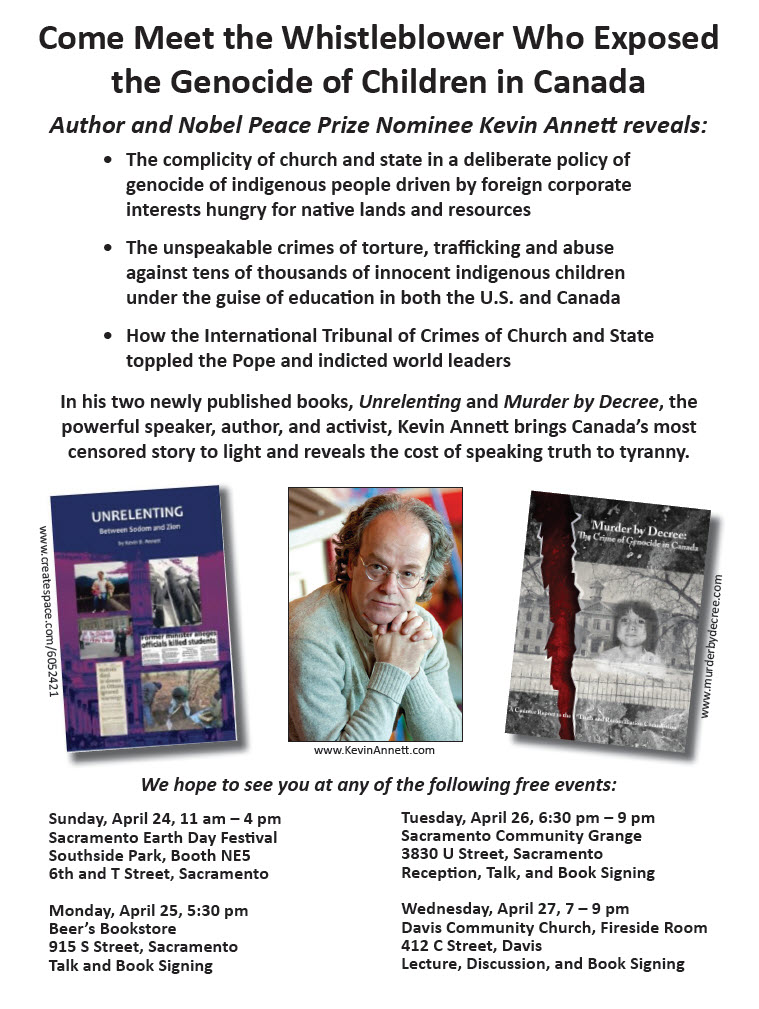 22 thoughts on “Whistleblower Kevin Annett To Talk in Davis, Sacramento”