If the protesters were disappointed with their numbers – substantially lower than the 100 to 200 they were hoping for, they made up for it with their presence which threatened to overshadow the dedication of the Gandhi statue with speeches from among others Senator Lois Wolk and the Indian Consulate General.

Throughout the speeches, the protesters made up of primarily Sikhs, unhappy that the legacy of Gandhi has been celebrated, chanted things such as “Gandhi Gandhi, Shame Shame,” and others which would have be less appropriate for an event with numerous children singing songs and reading poetry.

But Mayor Robb Davis stole it back, turning to face the protestors and for a few impassioned minutes, all were silent and riveted on the words of the mayor.

I would like to address my remarks to the statue. Welcome to Davis, California Mr. Gandhi. That is “where” you are but I wonder if you know “when” you are—not the exact year (it is 2016) but the “when” in terms of the evolution of society and the evolution of the human heart.
Over the past generation mighty empires and smaller states have crumbled and splintered, leaving behind a growing tribalism and violence… and war that has become the background noise of our lives.
And within this nation, demographers tell us that we have nearly completed the successful physical “sorting” of ourselves into communities that are homogeneous in thought and ideology. We also sort ourselves “virtually” tuning out the views with which we do not agree and surrounding ourselves only with opinions we already hold.
And what of our hearts? In our age Nietzsche’s superman has met Rand’s Galt at the altar of hyperconsumption and that union has begat an offspring called narcissistic autonomy—a child that wills to be left alone to pursue personal peace and security. And we have accepted this child into our hearts. We have sought autonomy but have obtained only anomie.
Like sheep we have gone astray, each one turning to his or her own way.
And while we have not killed the God or the gods as Nietzsche’s madman suggested, we have certainly driven them out. We are abandoned to ourselves. But we still hear that voice—the same one that mythical Cain of old heard from the God after he had slaughtered his brother. That voice asked: “Cain, where is your brother?”
The voice we hear asks us:
Where is your black brother?
Where is your immigrant sister?
Where is your refugee brother?
Where is your war oppressed sister?
But unlike Cain, who knowing his sin petulantly responded “Am I my brother’s keeper?”, we stand arms folded across our chests and boldly retort:
“I am NOT by brother’s keeper “
I am not my sister’s keeper.”
And like Cain, we find ourselves abandoned.
This is the “when” into which you have come Mr. Gandhi.
And so we ask: Can you save us Mr. Gandhi?
Why have you come?
Who are you or perhaps more appropriately WHAT are you Mr. Gandhi?
Are you merely a symbol?
Currency in a patron/client exchange?
Brand India?
A god revered by some?
A scapegoat hated by others?
What will you do here Mr. Gandhi?
What will you do with them (gesture to protesters)? Will you dismiss them as a slice of nothing? As terrorists? Will you minimize them? Or will you approach them to engage them? To hear their stories even as they hurl their vitriol at you? Can you become their friend through the non-violent conflict resolution methods you taught?
So many questions… Despite them, we welcome you Mr. Gandhi.
We welcome you… but with some amount of fear.
Fear because it is not yet clear what we will do with YOU.
Will we hide behind you, to block out the conflict all around us, to shield our eyes from the violence all the while proclaiming we are peacemakers because, after all, we have our Gandhi statue? Will we ask you to shield us from the brokenness of our world? To merely check the box that says we have done our part for peace?
Or will we walk beside you like children, clutching your hand, hoping beyond hope that in some talismanic way you will cause the conflict to cease? Will we seek to derive a magical power from your presence, asking you to solve our conflicts because we feel incapable of doing so?
Or… will we walk before you to face the conflict born of our autonomy quest, our narcissism, our anomie? Will we engage it OURSELVES as peacemakers: turning the other cheek again, and again, and again—as you suggested we MUST—in order to move beyond the casual violence of neglect, to peace and reconciliation. May we find the strength to do the latter—to walk before you—thereby beginning the long process of putting an end to the “great turning away”—the great exclusion—so that we might rediscover human embrace.
Welcome to Davis Mr. Gandhi.

The Mayor’s remarks followed those of Senator Lois Wolk who invoked the spirit of the first amendment.  She told the protestors, “I have listened to you, you have the right to be here, but I also have the right to speak.”

She called Gandhi, “one of the greatest teachers of peace and non-violence and passive resistance in the twentieth century.”  She said, “He taught that change can take place without violence.”

Among the leaders of the protests was Attorney Amar Shergill.  He told the Vanguard prior to the march, “It’s simply shameful that the city of Davis through its council has allowed the government of India to place a statue here about a man that exhibited horrible racism throughout his life, pedophilia.  And more than that, the Indian government is using the myth of Gandhi to obscure the ongoing brutalization of minorities, Christians, Muslims, Sikhs, in India.”

“This is not a matter of ancient history,” Mr. Shergill explained.  “This is what’s going on right now.  So we’re protesting not only to address the truth of Gandhi, but also to possibly save the lives in India right now.”

Mr. Shergill said, “We need to bring truth to Davis.  Davis is a progressive town.  They’re willing to listen.  They just haven’t heard this story.  So today is an opportunity to make sure that people in Davis hear the truth that their council turned a blind eye to… and by educating people here, we can make sure that a Hollywood myth is not propagated anymore.” 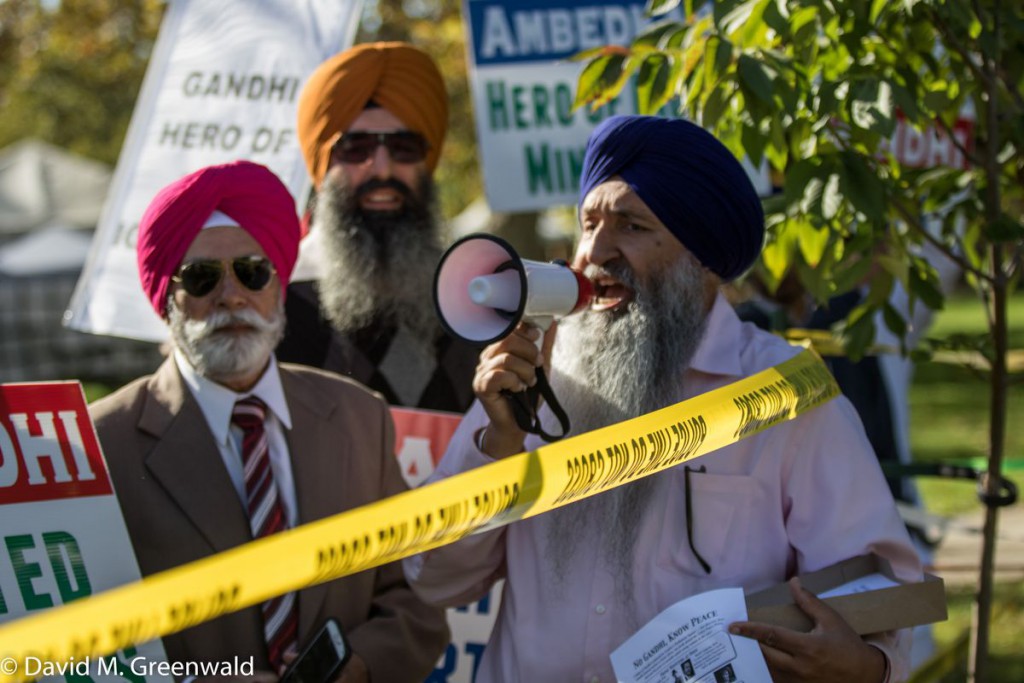 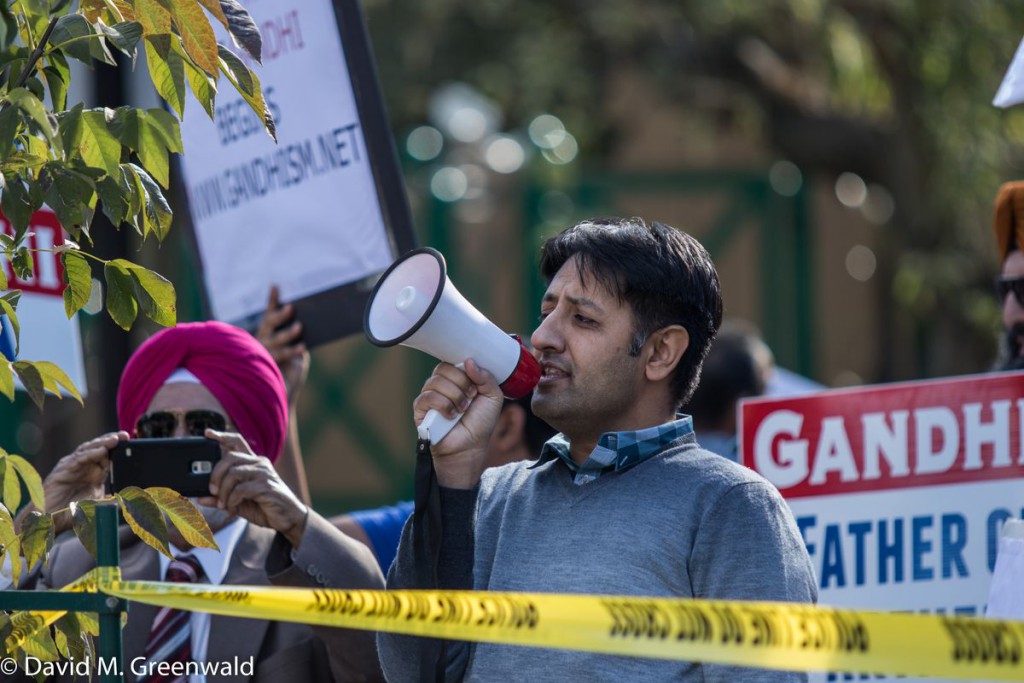 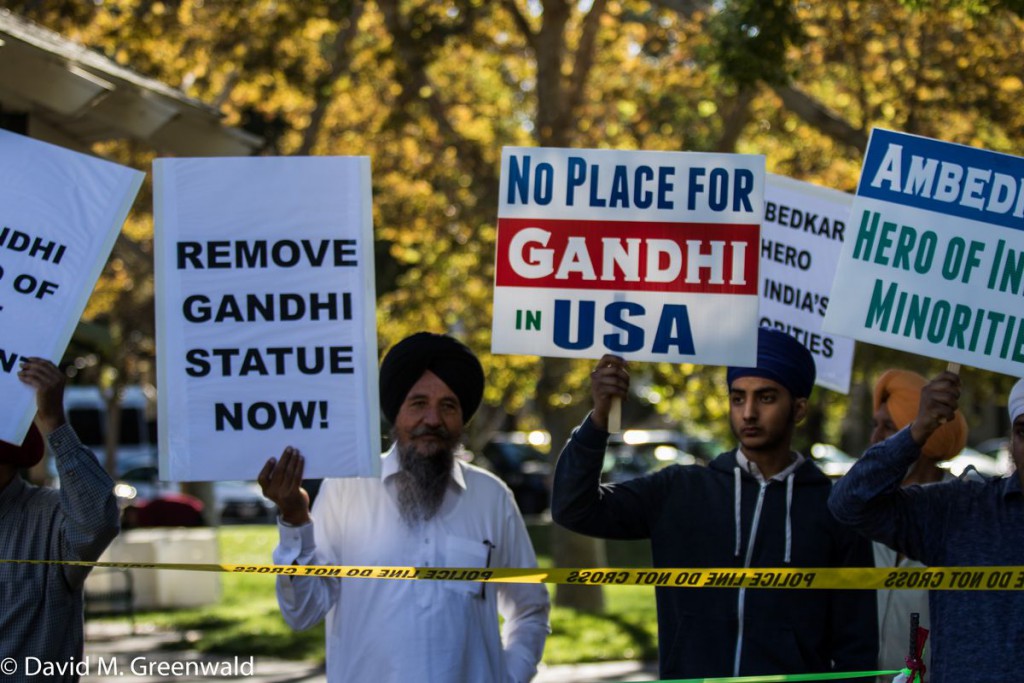 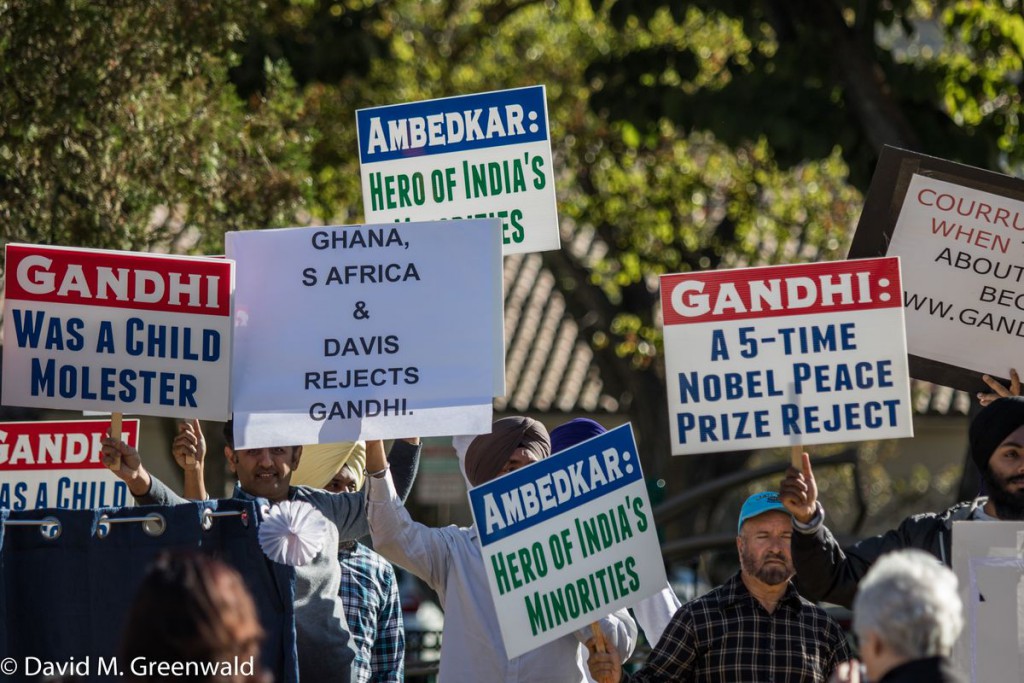 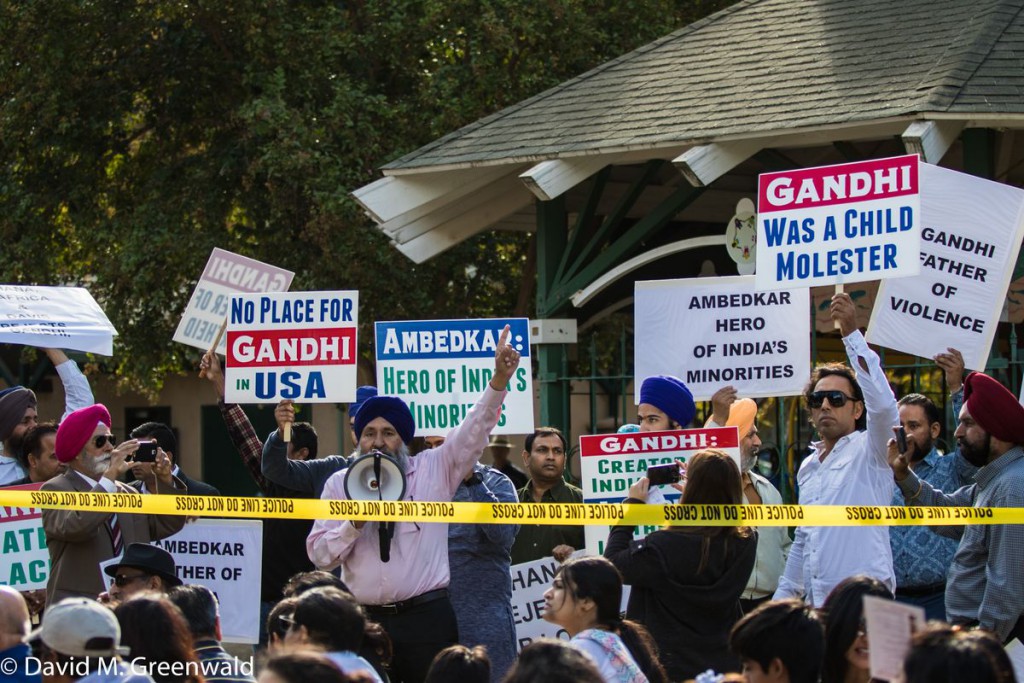 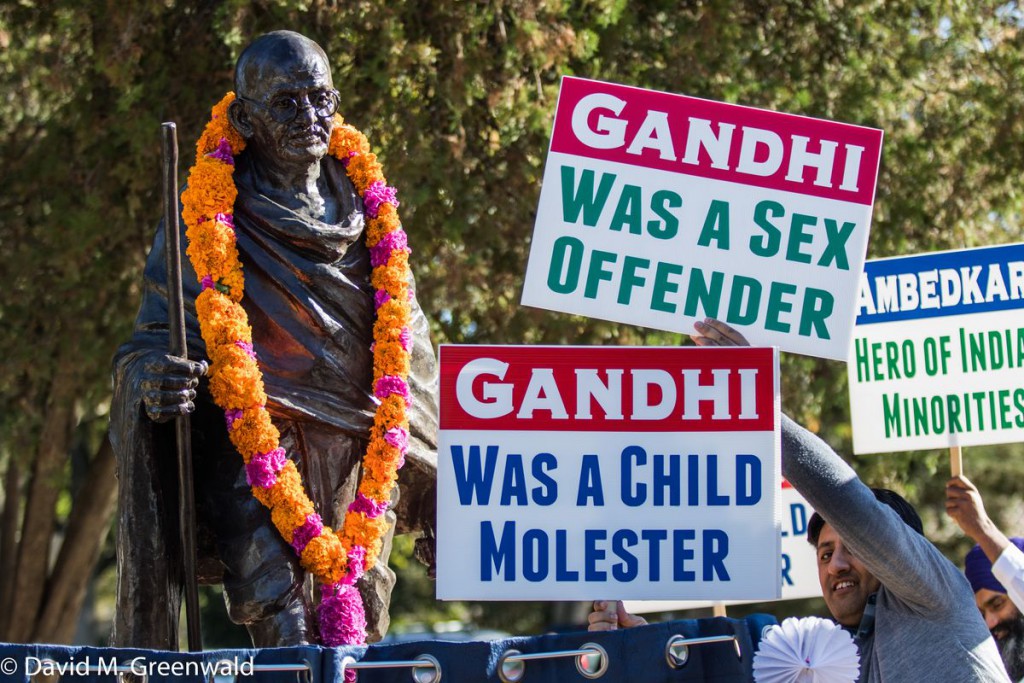 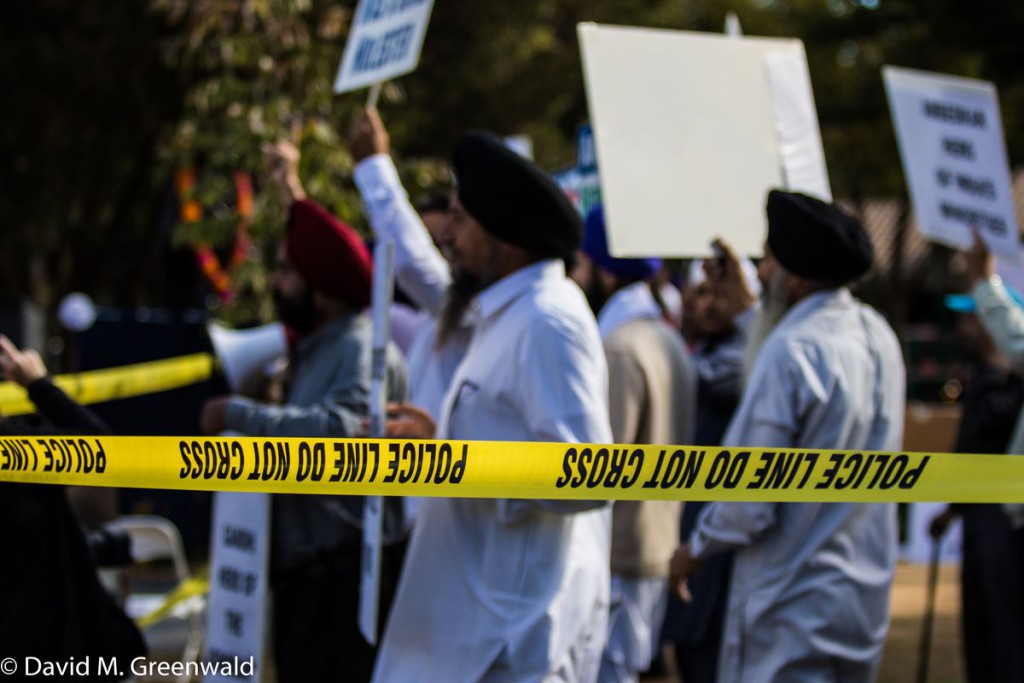 Share:
Tags:GandhiLois WolkRobb Davis
Previous : Eye on the Courts: Prosecutorial Bias and Racial Imbalance
Next : Continuation of Medical Testimony in the Case of Cameron Morrison