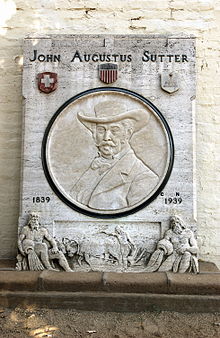 The name of John Sutter is ubiquitous throughout the greater Sacramento area and beyond. From Sutterville Road to Sutter’s Creek, the namesake seeks to honor the man who is regarded as the founding father of Sacramento. Sutter’s Fort is the largest monument paying homage to his presence. Hundreds of thousands of school children flock there every year to absorb local history and enjoy a day of learning in the sun.

Just a stone’s throw away sits the California Indian Museum, a tiny archive of artifacts left behind from the once flourishing native populations of the area. It is also a quick stop for students on the grand tour of the pioneer days, yet undoubtedly less focal as the centerpiece story of John A. Sutter.

Children are taught a romantic story of an immigrant settler who forged the earliest development of what we now know as Sacramento. They memorize poems and read passages about his biography as a way to show pride for their local heritage. They learn the G version of John Sutter’s life which fits perfectly into the larger narrative of brave American patriots, no matter how disloyal it is to historical veracity. The truth, however, might be too difficult for many to bear.

In fact, Captain John A. Sutter was not a captain at all. After unlawfully fleeing his native Switzerland upon facing jail time for his abuse of credit, he abandoned his wife and five children with his debts and escaped to America with a French passport which bore the name “Captain John Augustus Sutter.” After living as a vagabond for several years, Sutter finally arrived in Mexican California and impersonated a Swiss guard officer who had been displaced by the French Revolution. His proclivity for telling falsehoods worked in persuading Governor Juan Bautista Alvarado to grant him 48,400 acres of land for the sake of curtailing American encroachment on the Mexican territory of California. This stretch of land was called New Helvetia and Sutter was given the right to “represent in the Establishment of New Helvetia all the laws of the country, to function as political authority and dispenser of justice, in order to prevent the robberies committed by adventurers from the United States, to stop the invasion of savage Indians, and the hunting and trading by companies from the Columbia (river).”

With this authority, he used Native American labor to construct the first white settlement in the California Central Valley. To assuage Governor Juan Bautista Alvarado, Sutter became a Mexican citizen. However, shortly after his land tract was granted and his fort was erected, Sutter quickly reneged on his agreement to discourage European trespass. On the contrary, Sutter aided the migration of whites to California. “I gave passports to those entering the country…and this (Bautista) did not like…I encouraged immigration, while they discouraged it. I sympathized with the Americans while they hated them.”  After all, Sutter needed a wave of customers to consume his products and services (most of which were procured by Indian slaves). This is the part of the story which is lent to popular history – the welcoming Swiss Captain with an American heart who was well liked by white men seeking cheap land out West.

In actuality, Sutter terrorized his Indian work force, whom he stated should be used to serve white land owners “strictly under fear.”  His modus operandi involved the use of “kidnapping, food deprivation, and slavery” to secure the production of goods and services at New Helvetia. Marysville settler Theodor Cordua testified that local Native Americans were given two choices: surrender at will or be taken as slave. “Those who did not want to work were considered enemies. With the other tribes the field was taken against the hostile Indian…the villages were attacked usually before daybreak when everybody was asleep. Neither old nor young was spared…and often the Sacramento River was colored red by the blood of the innocent Indians.”

Another witness, Heinrich Leinhard, wrote of the treatment of the enslaved once captured. “As the room had neither beds nor straw, the inmates were forced to sleep on the bare floor. When I opened the door for them in the morning, the odor that greeted me was overwhelming, for no sanitary arrangements had been provided. What these rooms were like after ten days or two weeks can be imagined, and the fact that nocturnal confinement was not agreeable to the Indians was obvious. Large numbers deserted during the daytime, or remained outside the fort when the gates were locked.”

Despite the procurement of fertile agriculture, Sutter fed his Native American work force in pig troughs, where they would eat gruel with their hands in the sun on their knees. Numerous visitors to Sutter’s Fort noted the shock of this sight in their diaries, alongside their discontent for his kidnapping of Indian children who were sold into bondage or given as gifts.

“The Capt. [Sutter] keeps 600 to 800 Indians in a complete state of Slavery and as I had the mortification of seeing them dine I may give a short description. 10 or 15 Troughs 3 or 4 feet long were brought out of the cook room and seated in the Broiling sun. All the Labourers grate [sic] and small ran to the troughs like so many pigs and fed themselves with their hands as long as the troughs contained even a moisture.” – James Clyman, 1846

“I could not reconcile my feelings to see these fellows being driven, as it were, around some narrow troughs of hollow tree trunks, out of which, crouched on their haunches, they fed more like beasts than human beings, using their hands in hurried manner to convey to their mouths the thin porage [sic] which was served to them. Soon they filed off to the fields after having, I fancy, half satisfied their physical wants.” – Dr. G.M. Waseurtz af Sandels, 1842

“The public can see how inhuman were the operations of Sutter who had no scruples about depriving Indian mothers of their children. Sutter has sent these little Indian children as gifts to people who live far from the place of their birth, without demanding of them any promises that in their homes the Indians should be treated with kindness.”– Gov. Alvarado, 1845

Historians also claim that Sutter was known to rape his Indian captives, even girls as young as 12 years old. What is clear is that autochthonous people were no more than chattel to the man who gave much of his namesake to the local region. Sutter’s appointed fort manager wrote, “The Indians of California make as obedient and humble slaves as the Negro in the South.”

In the end, however, John Sutter’s demise was what had once been his source of fame – his welcoming spirit of white immigration.  In 1849, gold was found along the Sacramento River by Sutter’s right hand man, James W. Marshall. Sutter intended on keeping the find secret so as to exploit the precious metal himself and pay his ever-mounting debts. Soon after, news of gold in the river was printed in a newspaper by Samuel Brannan and the hysteria of the California gold rush ensued. The large influx of incoming miners made it impossible for Sutter to enforce land barriers and his tract was soon invaded and overrun. He was forced to sell New Helvetia to pay his debts. He died in 1880 in a hotel room in Washington, D.C..

Furthermore, the next two decades would witness the catastrophic annihilation of Native peoples from numerous methods of genocide. When John Sutter oversaw the construction of Sutter’s Fort in 1839, Native Americans outnumbered white men 700 to 1. Currently, less than 1% of the local population is of Native descent.

It is an unpleasant history, but the truth is rarely as satisfying as it presents itself in 6th grade social studies books. The story goes along to the tune of most other American founding fathers – a poetic façade that covers our dark history of racism, violence, and inequality. As Sacramento continues to pay homage to the name Sutter, it is important to remember at what cost it comes, or at least be educated on what it means. As children from Sutterville Elementary and Sutter Middle pile into the meek building alongside Sutter’s Fort on their yearly field trips to the California State Indian Museum, we must ask ourselves how much of the story we really want to tell – and how much we really want to fantasize the virtues of a slave holder.

4 thoughts on “The Lesser Known History of John A. Sutter”