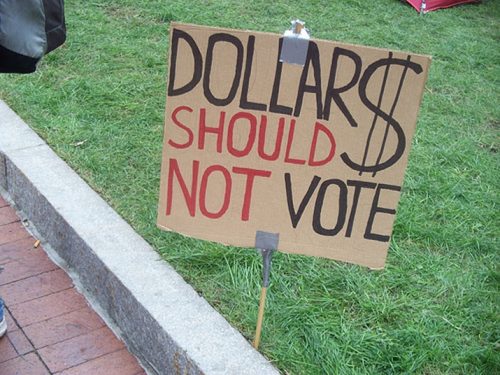 The arguments made in favor of the raise are that the $100 level was established more than 25 years ago in 1991 – the city was smaller and the cost of campaigns was less.

Since I didn’t move to Davis until 1996, I can’t really comment on that aspect of the issue.  I do know that when I first got active in Davis politics in 2006, candidates actually spent more on campaigns than they do now – a lot more.

What is remarkable is that in the four elections since 2008, no one has spent even $40,000 – and $30,000 is rare.  What I think happened is that the Great Recession impacted campaign costs and candidates once again realized that they really do not need to spend a ton of money to win.

A lot of winning a campaign these days seem to be comprised of: a walk piece, one mailer, signs, one big newspaper ad and some smaller incidentals.  You can do that for $20,000 to $25,000.

The nice thing about the $100 limit is that it really equalizes the influence.  Developers and those with deep pockets cannot throw in huge amounts of money behind their favored candidates.  The one exception was when the firefighters’ union figured out that they could bundle the contributions of each of their members to create a $4000 block (40 people giving $100 each).  But, for the most part, $100 puts all these interests on more equal footing.

To be clear, raising the limitations from $100 to $150 is probably not going to change that aspect that much.  Just as a candidate was not likely to get bought for $100, they won’t be bought for

And the modest raise of the limitation to $150 will not allow for a huge increase in the influence of big money.

The arguments can kind of go both ways here.  For example, we see in races where there are no campaign limitations – a lot more money coming into the races.  In the Measure R campaigns we have seen, like Measure X in 2005, the proponents spent perhaps up to three-quarters of a million in that campaign.  More recently, in Nishi, there was a clear monetary advantage for the proponents of the project.

On the other hand, you can argue that, in each case, the smaller, grassroots-oriented campaign ended up being successful.  The huge slick mailers in Measure X backfired.  The use of paid campaign workers in Measure P (2009) and Measure A (2016) ended up hurting rather than helping those campaigns.

The one successful campaign was the water campaign back in 2013 and, while money was clearly spent there, it largely succeeded because it was a community-based, grassroots-oriented campaign.

All of that suggests that Davis will likely retain the nature of its campaigns, where slick advertising and large glossy flyers are viewed with suspicion, not reverence.

Still, the system seems to be working at the $100 level – from the standpoint of the political observer.  The barrier to entry is relatively low.  You can run a credible campaign for $20,000 to $25,000.  Money itself is only a tool – the real work is the ability to mobilize the grassroots.

Those candidates who have created successful organizations, like Brett Lee and Robb Davis for example, were able to succeed.  Better known candidates who were not able to create campaign organizations have faltered.  That is the strength of our democracy here locally.

While I don’t think $150 is going to change that drastically, at the same time I do not see the huge value in increasing the contribution limit.  It appears to me that the system right now is not broken and therefore there is little reason to try to change it.

But we will see what happens.  As I said, I don’t see this as a disastrous move, but rather one that was not necessary and probably pushes us in the wrong direction.