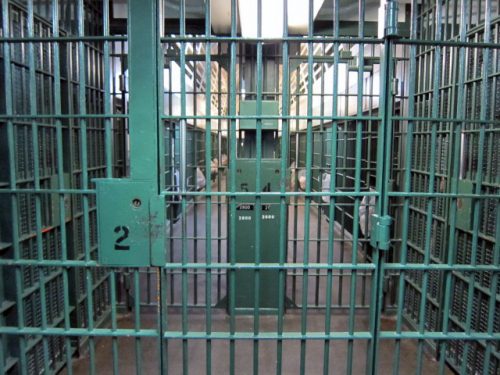 A coalition seeking to undo the recent string of criminal justice reform measures in California held a press conference Monday morning to say they will file a statewide ballot initiative “to prevent the early release of child traffickers, rapists and other serious and violent offenders.”

“Voters were promised that only ‘non-violent’ offenders would be released from prison early,” said District Attorney Anne Marie Schubert, a CAPSP board member. “But under current law, numerous violent crimes are not classified as ‘violent,’ including rape of an unconscious person, domestic violence, assaulting a peace officer and selling a child for sex. Our initiative fixes that to prevent criminals convicted of these crimes from being released early.”

The initiative also reportedly “fixes flawed reforms that are fueling a dramatic rise in serial theft, leaving habitual parole violators on the street, and preventing the collection of DNA to solve serious crimes.”

“This initiative reinstates DNA collection for certain crimes that Prop. 47 reduced to misdemeanors, giving law enforcement a better chance to find and prosecute violent criminals and sexual predators,” said Assemblyman Jim Cooper (D-Elk Grove), an initiative proponent and former sheriff’s captain whose efforts to fix this problem were blocked in the Legislature. “We’re reforming the

unintended consequences of reforms to better protect the public. That’s what this is all about.”

“A Whittier police officer was recently murdered by a parolee who had violated parole five times,” said Los Angeles Police Protective League President Craig Lally. “Sadly, this isn’t a lone incident. Too many Californians are being victimized by parolees who continually violate their paroles. This stops with our initiative.”

The initiative seeks to address the problem, as the proponents see it, on four fronts.

First, it adds “15 crimes to the list of violent crimes for which early release is not an option, including child abuse, rape of an unconscious person, trafficking a child for sex, domestic violence and assault with a deadly weapon. Under current law, these and other violent crimes are not considered violent, allowing the early release of inmates convicted of these crimes.”

Second, it reinstates DNA collection for certain crimes that were reduced to misdemeanors under Prop 47. According to the proponents, “Multiple studies have shown that DNA collected from theft and drug offenders helps solve rape, murder and other violent crimes. But since passage of Prop. 47, ‘cold case’ hits have fallen dramatically.”

Third, it makes what they call “serial theft” a felony for offenders convicted of a third theft of property valued at $250 or more.  Under Prop. 47, it reduced these to a misdemeanor for any theft under $950.  According to proponents, this “failed to account for thieves who steal repeatedly, which has spawned an epidemic of shoplifting costing California’s retailers, small and large, an estimated billion dollars.”

Finally, it requires a mandatory hearing to determine whether parole should be revoked for any parolee who violates the terms of his parole for the third time. Currently, proponents say “parolees can violate parole repeatedly with little consequence.”

“We’re seeing a dangerous increase in crime across California because of recent changes to our criminal justice system,” said Crime Victims United President Nina Salarno, another CAPSP board member. “Our initiative will help reverse this trend and prevent other Californians from becoming victims.”

The ACLU, which has backed the reform efforts, issued a statement in response by Ana Zamora, who is the ACLU of California director of prosecutorial reform.

“California’s elected District Attorneys are unfortunately following the lead of President Trump and Attorney General Jeff Sessions to push a fear-based narrative that ignores the reality that crime in California is at historic lows,” Ana Zamora said. “They would like us to believe that California is in dire straits in order to reverse many of the reforms we have put in place since 2012.

“Our state leads the nation in research-driven and effective policy reform aimed at addressing crime and improving the safety and wellbeing of all California communities. And it’s working!” Ms. Zamora continued.  “Crime rates in our state remain at historic lows and people who commit crimes are being held accountable and, just as importantly, receiving treatment and services to help them get back on their feet and not commit future crime.

“We urge the proponents of this new effort to reject the Trump Administration’s return to the failed 1990’s era of harsh sentencing and mass incarceration, as the voters of this state have consistently done, and instead work toward keeping California’s crime rates the lowest in history,” she concluded.