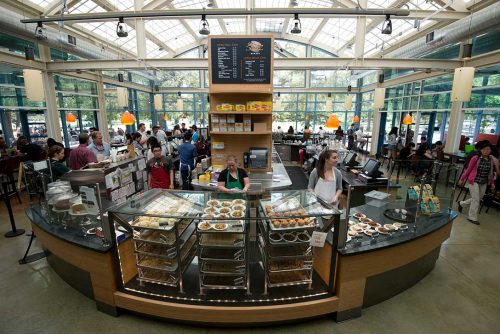 Earlier this week we presented information on how much per month students were spending on campus housing, including meals.  The monthly cost here is $1473 for triple occupancy, $1626 for double and nearly $1800 for a single room.

Not only did it seem that the students were spending more than market rate for the base housing rate (around $1050 a month for a single room) but they were also spending an additional $400 to $600 a month on food which seems to be a lot more than they would have spent on their own).  I suggested “more like half that” which would have put them in the $200 to $300 range.

Not surprisingly, I got pushback by Eileen Samitz: “You have proven nothing of the sort, but you sure are trying to sell your ridiculous comparison of on-campus housing with meals, to off-campus housing without meals.  Oh yes, and you believe that students live on $50 a week for food. Right…  So you think anybody is believing this desperate pitch of yours? It is simply absurd.”

My sense has been that students don’t have much in the way of disposable money.  That they make up for paying more than half of their take home money on rent each month by skimping on other spending, including food.  When I was in school 20 to 25 years, I remember students who would survive for months on a bag of generic cereal, some milk and packages of ramen (which you can still get for less than 30 cents a package or a 12-pack for less than $2).

So I reached out to the resources I have – my interns and some college Facebook friends.  What I found was interesting to say the least.  There is a range of student spending.  A good number of

students are not only spending $50 a week, they are spending less than that.  There are some, though, that are spending between $90 and $120 per week.

So here are some of the responses I got – I’m not putting names down, but this gives you a good flavor.

“Not counting my meal swipes, 20 to 25, granted I have my pantry with spices and garlic.  That’s with like trail mix for class breaks.  I buy salad stuff and chicken, but I make all my marinades and dressing which saves money.  My roommate spends like $40/$45 week.  And we both cook so it’s not frozen or pre-made items.”

“When I was living in Davis, I was using EBT/ CalFresh which gave me up to $193 a month.  I could use it only on cold foods but in Davis, Safeway, the Nugget, SaveMart, etc. would also accept EBT which made food choices easier.  Before I found out about the program I would (spend) ~$100 per month.  But I also saved a lot on rent so it was easier to budget.”

“When I wasn’t using a meal plan I was operating off $100 for food a week. Some of the students that I interned with in DC at the time where operating off of less than $50 a week for food.”

“I just reviewed my spending, I spend on average $200 a month on groceries (most of it at grocery outlet) and another $100 on eating out a month.”

“My housemates (3) and I shop together and share everything, which is about $120 a month in groceries. As a full time student with an on campus job I also spend at a minimum another $60/week buying food on campus.”

“Since my schedule pretty much forces me to eat out every meal I spend about $200 a week on food.”

“I just checked my monthly expenses: 2 person household (both of us are students), we spend 775$/month, which makes it 97$/week/person. We almost never eat out. and the food we buy is nutritious (no carbs, no sugars).”

“My grocery shopping is based more around the amount of foodstuff left in my cabinet than on a regular shopping schedule, but my snap benefits provide an average of $48 a week, and I’m usually pretty secure with the amount I’m provided.”

“The only way I stayed ‘financially solvent’ during undergrad was the food credit provided by the CoHo. We got $1/hour worked in food credit. I could at least get a bagel. I tried to keep it to $100 every 2 weeks on groceries.”

While this is by no means a scientific survey, it gives you a flavor for what students are spending on food each week – and how they get there.  None of this surprises me, but I am concerned that many in this community are disconnected from the hardships that students are facing.

A lot of people in this community are unaware of just how much students are spending each month on rent and the ways that they are compensating for those high costs.  I believe that this is a direct result of the high rents and the housing crisis.

It is good that the university is not only looking at the issue of affordable housing but also food security.  Most students are not spending $1400 to $1800 for food and rent off campus and the fact that they are going to have to live on campus means that many will choose not to do so.

Unless the university can make the cost of living more affordable, their adding additional beds is not going to be a huge help.

56 thoughts on “Commentary: Students Don’t Spend a Lot on Food Each Week”