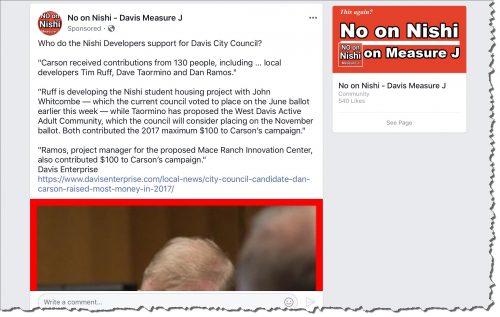 A few weeks ago, the No on Nishi campaign, put out a Facebook-sponsored ad, with the lead: “Who do the Nishi Developers support for Davis City Council?”

But the add itself, quoting from the February Davis Enterprise article, quickly became muddled, conflating “Nishi Developers” with all developers.

For instance, it quotes the Enterprise, stating, “Carson received contributions from 130 people, including … local developers Tim Ruff, Dave Taormino and Dan Ramos.”  The accuracy of the ad’s lead is called into question by conflating the Nishi Developer – in this case Tim Ruff – with Dave Taormino of the West Davis Active Adult Community and Dan Ramos of Mace Ranch Innovation Center.

At that time, for the period ending in December 31, they each gave $100.  The Enterprise actually underreported the contributions, because both Dave Taormino’s wife and Tim Ruff’s wife also contributed $100 at that time.  But still you are talking $500 out of $13,000 raised by the Dan Carson campaign.  Five contributions out of 130.

There was a long debate about all of this on Facebook, but I have now looked at each candidate’s contributors – for four of them – and developer money is certainly there, but not very pervasive.  When you consider the centrality of the issue of housing to this campaign, the lack of developer influence is noteworthy and probably at least in part attributable to the now $150 campaign contribution limitation that kicked in on January 1 of this year.

It is worth noting that several candidates are not accepting money from developers.  Ezra Beeman, when the Sierra Club asked the question, stated: “A conflict of interest or the appearance of a

conflict arises when taking money from groups or individuals with desires that are contrary to the interests of the community. Hence, I am taking no such contributions whether from city employees or associations, developers, or those with city contracts.”

Linda Deos said, “I have not taken any money from developers, unions, or other entities doing business with the City of Davis.”

Luis Rios stated, “I do not believe in collecting donations from developer or elected politicians to run for city council.”

Four candidates have taken money from developers.  In our view, it is always tricky to determine just who a developer is.  For example, someone like Chuck Cunningham is not a developer, but his well-regarded Engineering Company probably works for every project or nearly every project in the city.  For the purposes here, we are only considering developers as those who actually have ownership stakes.

Eric Gudz received $100 from Steve Greenfield and $100 from Kemble Pope (Trackside) with another $77 coming from Sandy Whitcombe.

Mark West has said he will take money from developers but to date has not received any.   He stated, “My vote is not for sale, nor am I a windsock responding to the amount or direction of hot air in the room. I will make decisions that I believe are in the best interests of the city following evaluation of all the available data and input, using my values as a guide. Consequently, I do not care where my support comes from, and will accept financial support from anyone who offers.”

However, our overall analysis shows that, while developer money is present in the race, even in the case of Dan Carson you are talking about only $950 in direct contributions from developers and $2000 or so if you use a much more expansive definition.  In neither case is it likely to play a huge role in his decision making process.

All told, developers have contributed to those four candidates less than $3000 out of more than $60,000 that the four have collectively raised.  The nice thing about this campaign is that voters have a choice – they can be purists or they can be pragmatists.  Either way, they have plenty of candidates to choose from.

26 thoughts on “Sunday Commentary: Developer Money in the Race – but Not Pervasive”