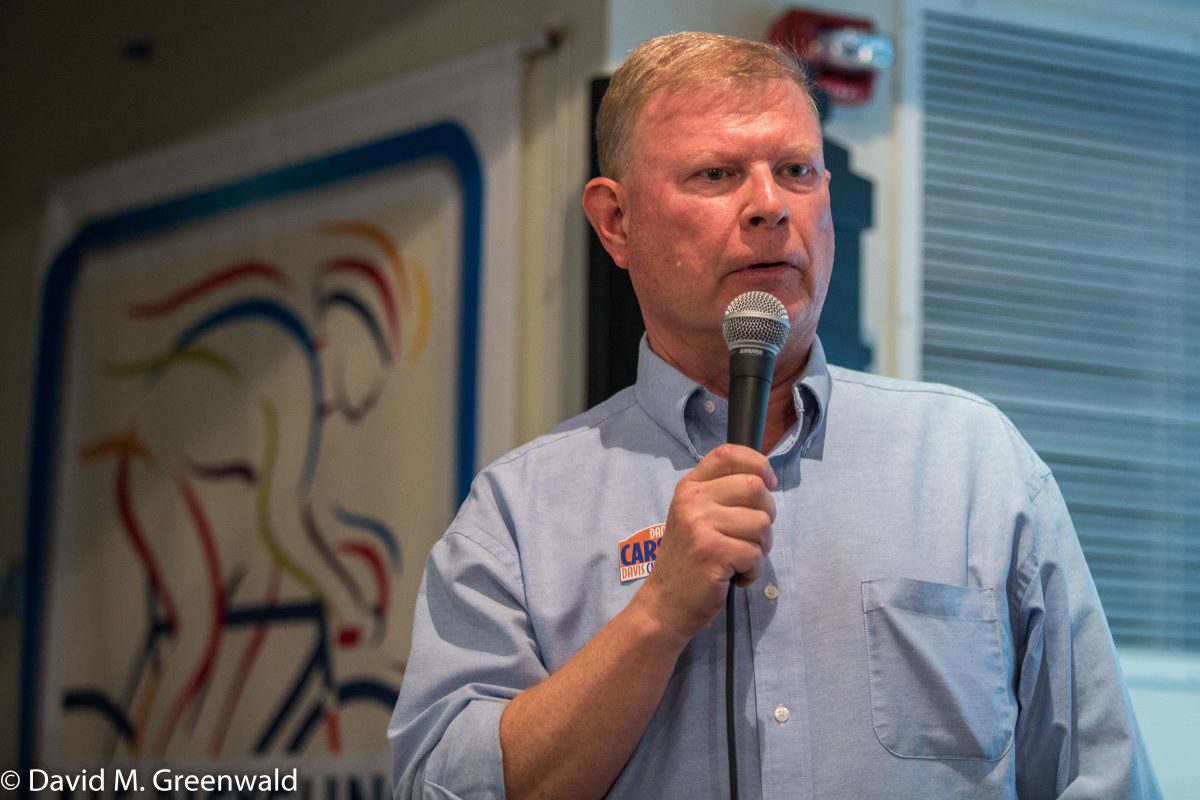 The Battle is On for Second in Cash Raised Among Deos, Bryan, Partida and Possibly Guenther

It is always hard to handicap a race in which there is no polling, turnout is uncertain, and the dynamics of the campaign are still unfolding.  However, for the first time in this race that is dominated by a large field and uncertainty, I feel safe in proclaiming that Dan Carson is the prohibitive frontrunner.

Money matters in Davis politics probably more as an indicator of level of support than an instrument to acquire more votes.  Candidates can win in Davis based on grassroots activity and precinct walking, but usually the winning candidates are backed by a large pool of people willing to donate money, and Dan Carson has that.

Let us put this dominating performance into perspective.  Since 2008, Dan Carson has already raised more money than any other candidate.  The 2008 campaign was the last really big-spending campaign we had – before the recession.  In that campaign, Don Saylor finished first and raised over $75,000.  There were in fact four candidates to raise at least $40,000 – Stephen Souza, Sue Greenwald, and Cecilia Escamilla-Greenwald. 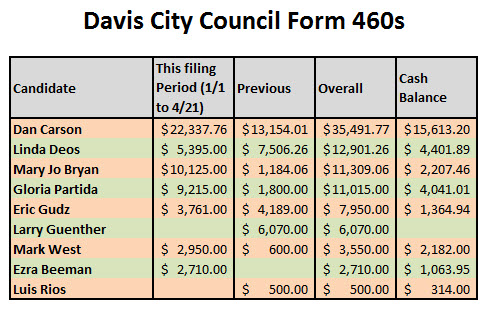 Within this field, Dan Carson is simply dominating.  Again, let us put this into perspective.  He raised $35,491 for the total campaign, and that is more than the next three highest candidates COMBINED.

His $22,000-plus raised this current cycle is nearly double what Linda Deos, the number one candidate in donations, has raised for the entire campaign.

One might be tempted to put an explanation on the campaign finance changes, but if that’s true, it is unclear from the data.  He has raised the new $150 maximum from 85 individuals this period out of about 145 or so total donations this period.  However, that additional money only accounts for about $4250 of the $22,337 he has raised.

This is still about volume of donations and Dan Carson is simply lapping the field in this respect.

Does that mean he’s going to win?  Not necessarily, especially in a nine-person race that figures to have interesting vote splits.

There are several other reasons to put Dan into the “clear frontrunner category.”

First, he seems to be the choice among the establishment.  How well that translates into actual votes, you see a broad group of people, including a lot of influential current and former officeholders, supporting Dan Carson.

Second, as we have analyzed previously and likely will again, Dan Carson has the best or at least among the best command of the overall issues of any candidate.  Anyone who listens to Dan Carson

comes away believing that he has done his homework, put in the time, and knows his stuff.  That is true whether you agree or disagree with him on a particular issue.

Third, in a race full of single-issue candidates, you could argue Dan Carson falls into that category on fiscal issues, but he seems to have a much broader understanding of the overall issues than his colleagues.

It is hard to know for sure, but talking to him after the forum the other night, it would appear he has the most robust ground game.

Put that all together and, for the first time in this race, we appear to have a clear frontrunner.

Is this a race for second?  I would be careful.  I really believed in 2016, for example, that Will Arnold would be the clear winner.  Instead, Will Arnold placed third, mostly coasting, and Brett Lee put together the superior organization and dominated the field.

On the other hand, in 2010 Joe Krovoza, through superior organization and money, lapped the field, Dan Wolk was the clear frontrunner and dominated in 2012, and Robb Davis emerged from nowhere to dominate the field in 2014.  I would argue all of those performances were clearly visible, both in terms of money and campaign organizations.

I would argue that Dan Carson is in a similar boat.  But you never know and this could be the year that disproves the rule.

Still, at this point my gut tells me that we have a race mostly for second and there are a number of candidates that can finish second.

Linda Deos has a slight monetary edge with nearly $13,000 raised, she was the clear consensus choice for the Democratic Central Committee and has strong ties into the new progressive community.  It

will be interesting to see if perceived stumbles on the growth issue end up costing her.

Mary Jo Bryan has put together a very strong 2018 calendar year with about $10,000 this period to burst into second.  She is seen as a champion of senior issues and housing, although she was outspoken against Sterling.

Gloria Partida was probably the frontrunner coming into the race, the perception has been her performance has been lackluster, but she came in strongly with $9200 raised this period, third this period, fourth overall.

Eric Gudz has put together a diverse coalition, but his fate probably lies with the college turnout.  If 5000 students come out to vote for Nishi, Eric figures to be the beneficiary.

Then there are Larry Guenther and Ezra Beeman.  Larry’s 460 hasn’t shown up, but when it does, he could push into fifth, perhaps even higher on the money race.  He has had a strong showing.  It is probably fair to say that Ezra Beeman’s monetary performance is lackluster, but do not underestimate him.

The advantage that both Larry and Ezra have here is that they are the two opposing Nishi in this election.  Right now Nishi doesn’t seem to be a huge issue by itself – student housing is overall – but we are reminded that in 2000, there was only one candidate that opposed Measure J (the original Measure J as opposed to Nishi) and she dominated the field to finish first.

That was an eight-person field, but the top three were elected, while this is a nine-person field with only two seats available.  In 2000, the two incumbents sought reelection (Susie Boyd and Stan Forbes).  In 2018, there are no incumbents.

At this point, I would argue that Dan Carson is the frontrunner and as many as six other candidates have a realistic shot at second.  How that shakes out, hard to know.

21 thoughts on “My View: Carson Now Dominating the Field on Campaign Donations”