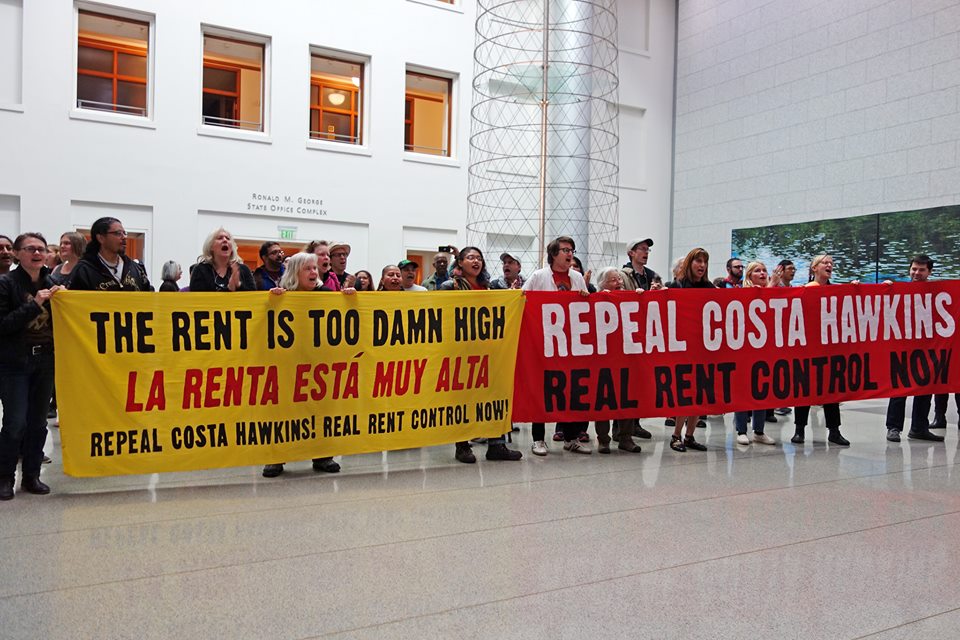 The deadline to qualify is June 25.  In April, supporters announced that they had gathered enough signatures to qualify for the November ballot.  It has not been officially certified as of yet.

Costa-Hawkins right now protects a landlord’s right to raise the rent to market rate on a unit once the tenant moves out and it prevents cities from establishing rent control on units constructed after February 1995.

Last year, Assemblymember Richard Bloom introduced AB 1506 but it failed to get out of the Assembly Committee, losing 3-2.  He argued that even if Costa-Hawkins were repealed, it would not have a huge immediate impact, as cities would have to pass new rent control ordinances before the repeal would yield much impact.  However, he believes that getting rid of Costa-Hawkins would give cities increased flexibility in setting rent control policies.

Opponents worry about the impact of getting rid of Costa-Hawkins.  The LAO (Legislative Analyst’s Office) in 2016 analyzed the repeal.  They found that the state’s shortage of housing “presents challenges for expanding rent control policies.”

currently lack them; and (2) prohibiting landlords from resetting rents to market rates for new tenants.

The LAO writes: “Neither of these changes would increase the supply of housing and, in fact, likely would discourage new construction.”

Meanwhile, proponents of the repeal believe that the law has not protected tenants and has allowed rents to reach unaffordable heights.

In a May 8, 2018 op-ed in the LA Times, Tracy Rosenthal argued, “By voting for the Affordable Housing Act ballot measure this November, Californians can restore the rights of cities to use a powerful tool to stop this escalating crisis: rent control.”

She argues that “Costa-Hawkins accomplished four things, each devastating to the affordability of housing in the state.”

She notes that “the relative success of L.A.’s limited rent control shows the promise of its expansion.”

Ms. Rosenthal, a member of the LA Tenants Union, explains: “L.A.’s 1978 ordinance limits rent increases to around 3%-5% a year — this is why even without vacancy controls, Mayor Eric Garcetti compared having a rent-controlled apartment to winning the lottery. As a 2009 report by L.A.’s Housing Department made clear, the ordinance protects tenants from being priced out of their homes when ‘hot’ markets boil. It also gives landlords reasonable returns on their investments as well as allowances to pass on renovation costs.”

She concludes: “As rents spike and the unhoused population swells, we can return to local governments the right to deter price-gouging and speculating, by repealing the 20-year-old, landlord-lobby Costa-Hawkins law.”

In a January Sacramento Bee editorial, Erika Smith of the Bee writes: “If not rent control, then what? California renters can’t afford to wait.”

Ms. Smith writes: “Grandmothers are getting price-gouged and put out in the street with nowhere else to go but a tent under a bridge. Entire families have had to move to different counties, with kids switching schools and parents commuting hours just to get to work. One woman told me how she keeps the receipts for her groceries so she can return them, if necessary, to pay her escalating rent.”

But she pointed out, when asked about alternative solutions to help renters stabilize their lives now, rent control opponents had no suggestions.

They argued that, if AB 1506 had passed, “the construction of new housing would’ve slowed to a standstill and tenants newly comfortable with low rents would stop moving, further limiting the supply of apartments while demand skyrocketed along with prices.”

The problem, as Ms. Smith points out, is “for abused renters, of which there are many in California, that scenario doesn’t sound a whole lot different than what’s happening right now without rent control. It’s hard to see how things could get worse.”

Ms. Smith concludes: “Rent control is far from a perfect solution and ballot initiatives are crude policy-making tools, at best. Hopefully, developers and landlords will huddle with tenants’ activists in the coming months to hammer out a legislative compromise that will be effective and palatable to both sides.”

When asked about the repeal of Costa-Hawkins, most of the council candidates opposed it.  However, one who did support it was Eric Gudz.

When addressing the issue at the Davis Downtown forum, Eric Gudz explained, “Before we even start talking about rent control, before we start talking about rent stabilization.  There are a few things that have to happen at the state level first.  A repeal of Costa-Hawkins is on the chopping block here.  I do support the repeal of Costa-Hawkins.  I think that’s a good first step for us to begin to open up the conversation and a bit more productive dialog.”

They added, “I don’t think a San Francisco style rent control is going to work here. A couple reasons for that, one is because of Costa-Hawkins. But second because we have a very active turnover within our population. We have a lot of students that are coming in and out, as we all know.

“What that does create is a lot of friction and tension when folks are coming in and out of housing. The cost of the increase in that rent is going to be borne through that changeover. While it does benefit greatly a lot of folks that are here for the long haul in the community, it does kind of present an acute issue, especially in the short term, especially when our vacancy rate is 0.4 percent.

“I think discussions need to happen with our rent stabilization. Discussions need to happen with ways in which we can incentivize the additional buildout of our supply, with our stock and university housing. I think there are a lot of things we can do to incentivize affordable by design units and units that are more accessible for folks who need a place to live in Davis.”

Is increased supply enough to overcome the need for rent control?  That could be a huge part of the debate for the fall, should the measure qualify for the November ballot.  We will find out in the next ten days.

101 thoughts on “Will A Repeal of Costa-Hawkins Get on the Ballot for November?”