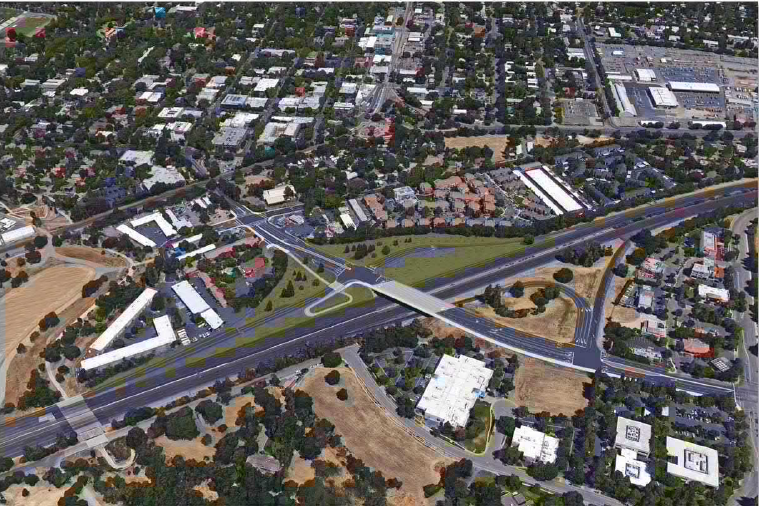 The city of Davis will finally have the money needed to complete the I-80/ Richards Blovd Interchange Improvement Project that the city has been seeking to achieve for years now.  The $5 million in grants is one of three projects funded through SACOG (Sacramento Area Council of Governments) for a total of $8.1 million.

With the $5 million for the Richards Blvd Improvement Project, the city will be able to add a grade separated Class I pathway under the westbound I-80 onramp to improve bicyclist and pedestrian safety between Research Park Drive in South Davis to First Street in Downtown Davis.

The city will then be able to reconfigure the Richards Boulevard westbound I-80 ramps from a cloverleaf to a tight diamond to create additional intersection spacing with Olive Drive.

The city plans to signalize the Richards Blvd exit from westbound I-80 to improve the flow of vehicles merging with vehicles already queued on Richards Boulevard at the Olive Drive intersection.

Finally, the city will officially close the Olive Drive exit from westbound I-80 to prevent vehicles from using the exit as a thoroughfare to improve safety in the Olive Drive neighborhood.

The city is also receiving two other grants – it announced on Wednesday.

It will get $2.9 million to support the Electrify Yolo Project.  This is a joint proposal between the City of Davis, the City of Woodland, the County of Yolo, and Valley Clean Energy, the region’s

The release notes, “the exact number of chargers and infrastructure is contingent upon the completion of a more detailed engineering cost estimate.”

Preliminarily the city is looking to add up to 60 240-volt, networked, level 2 electric vehicle charging stations throughout Yolo County, of which approximately 20 will be installed in Davis

They will also look to add 2-5 fast chargers in downtown areas near highway corridors, of which at least 2 will be installed in Davis and add up to 10 mobile, solar powered, electric vehicle chargers, of which all 10 will be available in Davis.

The city will also be purchasing an electric bus to serve Davis with local discretion on route priorities.

The final grant is $200,000 to support the County Road 32A Railroad Crossing Relocation Study, a joint proposal between the City of Davis and the County of Yolo.  There are concerns raised about the safety of this crossing and talk that Union Pacific will unilaterally close it.

This grant will allow the city and county to study the County Road 32A railroad crossing, located just east of Davis and north of I-80.  They will review the alternatives and identify the preferred option.  And then create a project scope and cost estimate for a potential crossing enhancement and/or relocation.

The funding is part of a process administered by SACOG, the Sacramento region’s association of local governments. Once SACOG executes grant agreements in early 2019, the City will establish more definitive details and timelines for each project.

These grants add to an increasing list of awards the City has recently received. The City estimates that in the past few years, it has successfully secured over $14.8 million in grant funds.

“The three SACOG grants represent tangible results from the City’s efforts to pursue and leverage grant opportunities. It is also exciting to see how multiple public entities are working collaboratively to achieve mutual goals that will positively impact the entire region,” said Mayor Brett Lee.

The city has been looking to improve Richards for a long time.  In the late 1990s, the voters turned down a measure that would have widened Richards tunnel under the railroad tracks.

During the 2016 Nishi proposal, the developers were going to invest roughly $23 million in infrastructure improvements including creating a widened West Olive Drive with a new route onto campus to bypass the tunnel.

However, the voters rejected that version of Nishi and the new version stipulates no access to Olive Drive.  The city estimated in addition to the $23 million from the Nishi project, about $10 million overall was needed for improvements, much of which would come from state and federal funding.

City Manager Mike Webb told the Vanguard that the $5 million will pay for just under half of the construction of the interchange.

“The project construction cost is estimated at around $11m, and we have already expended some funds for design and environmental review,” Mr. Webb explained.  “To the extent that the remaining funds are local funds, they would come from a combination of roadway impact fees from development projects (Lincoln 40, Nishi, hotels, etc…), Redevelopment Agency bond proceeds (which must be used in the former RDA project area and consistent with the former 5 year RDA implementation plan – which Richards interchange is both), and $500k from UC Davis as agreed to in the recent MOU.”

He said, “We are exploring other sources as well. Final funding package decisions will be made by the City Council when we do the bid process.  Of note, Roadway Impact fees cannot be used for maintenance but are used for upgrades and improvements such as this.”

Not included in this round was funding for the Olive to Depot bike and pedestrian crossing.  That is part of a separate application through Active Transportation Program or State ATP Funds where the city requested $5.9 million and should hear back in January or February.

Mike Webb said that at the January 22, 2019 Council Meeting, the City will provide an overview of their grant program and review the various grant efforts.

9 thoughts on “City Gets Grant Funding For Richards Blvd Interchange Improvement, Other Projects”