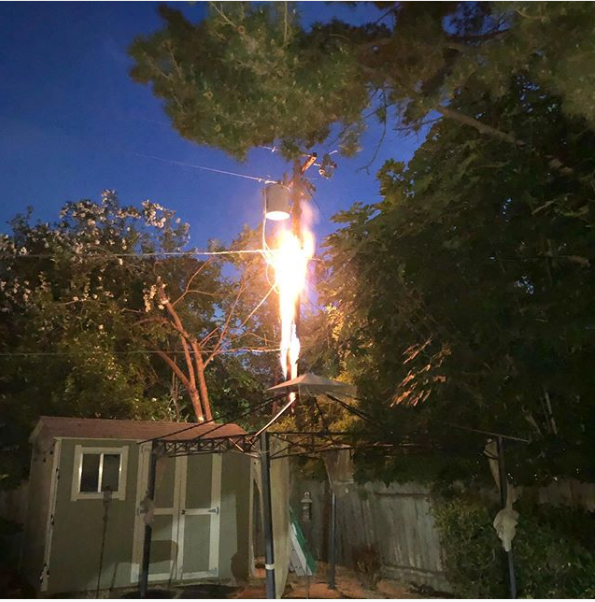 We are writing to express our grave concern about PG&E’s unacceptable response to a frightening recent incident in our neighborhood. On June 5th, 2019 at 8:44 PM, a fire started at a transformer on a PG&E pole located between four properties at the corner of Tamarack Lane and Scripps Drive, in Davis, California.

The pole is located at a point where four backyard fences meet for the four properties located on Scripps Drive, Tamarack Lane and Citadel. The electricity went out at some properties at 8:44 PM and the transformer started smoking and making “popping” noises, like the sound of fire crackers.

The resident at 1630 Tamarack Lane placed a call to 911 at 8:45 PM. By this-time, fire was visible and smoke had filled the neighbor’s yard.  The fire grew rapidly and a series of explosions happened while the resident was on the cell phone with 911 and continued throughout the fire.

The Fire Department arrived within 3 to 5 minutes. However, PG&E did not arrive until at least one hour later.

The evening of June 5th, 2019 was hot, at least in the high 90’s, but only the air conditioner at 1630 Tamarack Lane was turned on at the time. There was no wind – a saving grace – as the fire grew larger and spread down the pole where there are two storage sheds within 10 to 15 feet, and lower vegetation.

All trees nearby had already long been cut down either by PG&E or by the homeowners. The firefighters stood by in at least two backyards, but all they could do was make sure the fire didn’t spread.

They could not put out the fire due to danger of electrocution because PG&E had not yet switched the power off. If this had been just one day later, June 6th, with a howling wind, the fire would have spread rapidly.

What happened to this transformer? How could a new transformer, placed within the last 6 months, malfunction? Very minimal electricity was being drawn at that time by the four properties: only 1 air conditioner, and one house was using a television and one light.

We need a fire investigation to explain to us what happened. We are frightened by this event. People and their houses are in real danger. At three of the four properties, the neighbors did not even know the electrical pole was on fire; someone had to knock on their door to tell them.

What if this happens later on in the summer, when more people are using more electricity? What if people are out of town or asleep and do not notice the flames?

We have not been contacted by PG&E since this incident nor as of the date of this letter. A number of us were forced to sleep elsewhere on the evening of June 5th.  The only information we received was verbally from the Davis firefighters who told us PG&E would probably be back next day to repair and restore power.

As it happened, PG&E repaired everything overnight. However, not a single person from PG&E has communicated directly with any of us and we have received no explanation or apology or any reassurance that this event will not happen again. We feel we are in danger due to your substandard equipment, delayed arrival. and inadequate response from your company. As customers of PG&E we need answers and assurances that this situation will not repeat reoccur in Davis, let alone elsewhere.

We would therefore appreciate a prompt response explaining how this dangerous failure occurred, why the response from PG&E was so unacceptably slow, how you plan to investigate and correct the causes of the incident, and what actions will be taken to prevent a similar occurrence (with possibly more tragic consequences) in the future.

Share:
Tags:FirePG&EPublic Safety
Previous : Trump Border Czar Will Continue the Administration’s Cruel Border Policies
Next : My View: Housing Insecurity and Homeless Numbers at UCD a Cause for Alarm

9 thoughts on “Letter: Lack of Response by PG&E to Davis Fire”