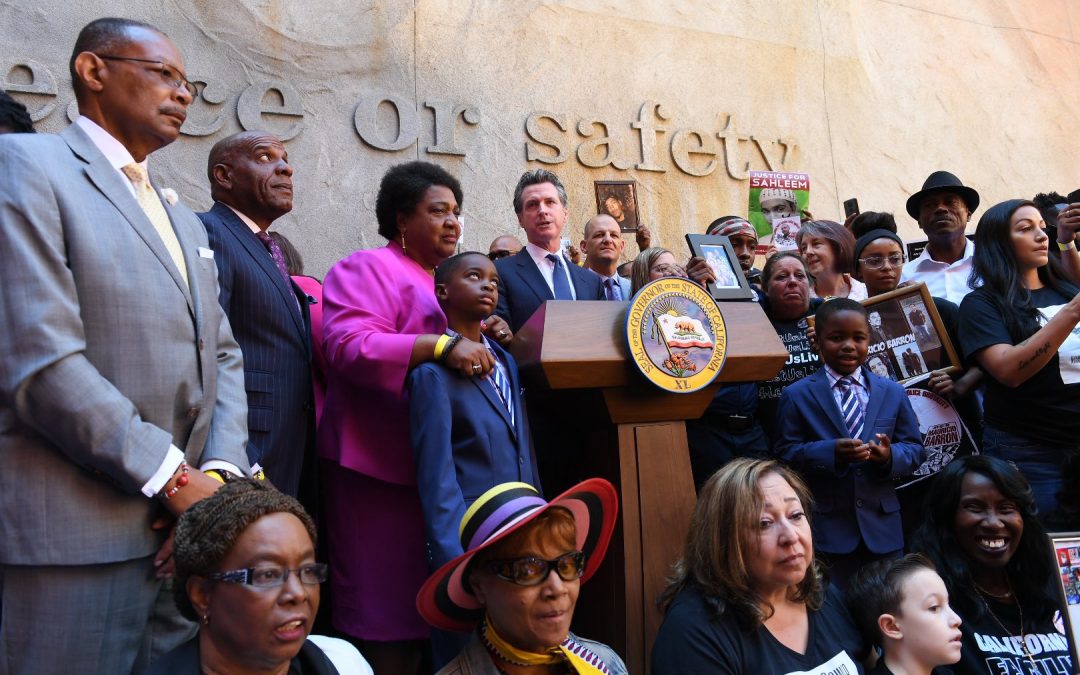 On Monday, Governor Gavin Newsom, as expected, signed AB 392, authored by Assemblymember Shirley Weber (D-San Diego), enacting one of the strongest use-of-force laws in the country.

AB 392 modernizes standards for use of deadly force by officers. Specifically, this bill updates the existing deadly force standards to provide that deadly force may only be used when necessary. AB 392 also requires officers to use other techniques to address threats instead of using deadly force when safe to do so, encouraging law enforcement to train on and use de-escalation techniques like verbal persuasion and other crisis intervention methods.

“This is a time for healing, progress and looking forward. The bill goes to the heart of some of our most sacred principles, in which force should be exercised judiciously, with respect for human life and dignity. The bottom line is that deadly force should only be used when absolutely necessary,” said Governor Newsom.

“With the Governor’s signature, we are closer to a culture of policing in California that values and preserves human life,” said Assemblymember Weber. “Working on this policy has been a high hill to climb, but what has lifted me up is the energy and the devotion of the families who have lost loved ones to these shootings. Our hope all along has been to save lives and to finally establish trust between law enforcement and communities of color.”

The provisions in AB 392 will be reflected in both law enforcement agency policy and officer training statewide, and will further ensure that all officers in California are trained to a higher legal standard. Use-of-force policies have remained largely unchanged since 1874.

Under AB 392, officers can use deadly force only when necessary to defend against an immediate, deadly threat to themselves or others.

accountability for unnecessary uses of force, setting a national precedent.

“I would hope that if AB 392 had been law last year, that our family would not have to be mourning Christopher’s first angelversary today,” said Barbara Okamoto, whose grandson Christopher Okamoto was killed on August 19, 2018. “I’m hopeful AB 392 will help make sure other families don’t have to go through what we had to go through this part year. It’s long overdue: officers’ gun is not their only option, they have many more options that they should use instead of taking someone’s life. They must stop killing our loved ones.”

AB 392 will raise the state’s use of force standard to require that officers use deadly force only when “necessary to defend against an imminent threat of death or serious bodily injury to the officer or to another person,” thus establishing one of the strongest use of force laws in the country. California will also become the only state to combine this “necessary” standard with the requirement that courts consider an officer’s conduct leading up to a use of deadly force when determining whether the officer’s actions were justified. AB 392 is already shaping national policy discussions. Representative Ro Khanna (D-California) recently introduced federal legislation to raise the use of force standard for federal officers.

“Today is a step forward in securing my children’s safety,” said Jesse Rodriguez, cousin of James De La Rosa who was shot and killed by Bakersfield police in 2014. “AB 392 could have prevented my cousin’s and many others’ deaths across the state. That’s why I stand with many families to make a change for our families and communities.”

Officers in California and most other states are currently allowed to use deadly force when it is “reasonable” – regardless of whether deadly force was necessary to prevent imminent death or serious bodily injury, whether there were available alternatives, or whether an officer’s own actions created the circumstances that led to the use of deadly force. California police officers kill more people than officers in any other state. Black and Latinx people and people with disabilities are more likely than other California residents to be targets of police violence. A recent study found that police violence is a leading cause of death for Black men in America.

Establishing a “necessary” standard is a practical solution to reduce the number of use of force incidents. Seattle and San Francisco’s police departments, for example, both successfully adopted a use of force standard like that of AB 392 under the guidance of the Obama Department of Justice. Both jurisdictions saw a reduction in the number of use of force incidents. Research also shows that police officers in cities with stricter use of force standards kill fewer people and are less likely to be injured or killed themselves.

“This bill is definitely a community win, but the hard work is in making sure that it is implemented properly,” said Miguel Quezada, whose uncle was killed by Modesto police in 2002. “We need to continue to strengthen the spirit and intent of this bill to honor those whose lives were stolen, as well as their families.”

“Police brutality is our reality,” said Alice Corley, whose son Lionel Gipson was killed by Long Beach police officers in 2016. “We celebrate today but aren’t finished yet. They say, ‘get back.’ We say, ‘fight back!’”

For full text of the bill, visit: http://leginfo.legislature.ca.gov