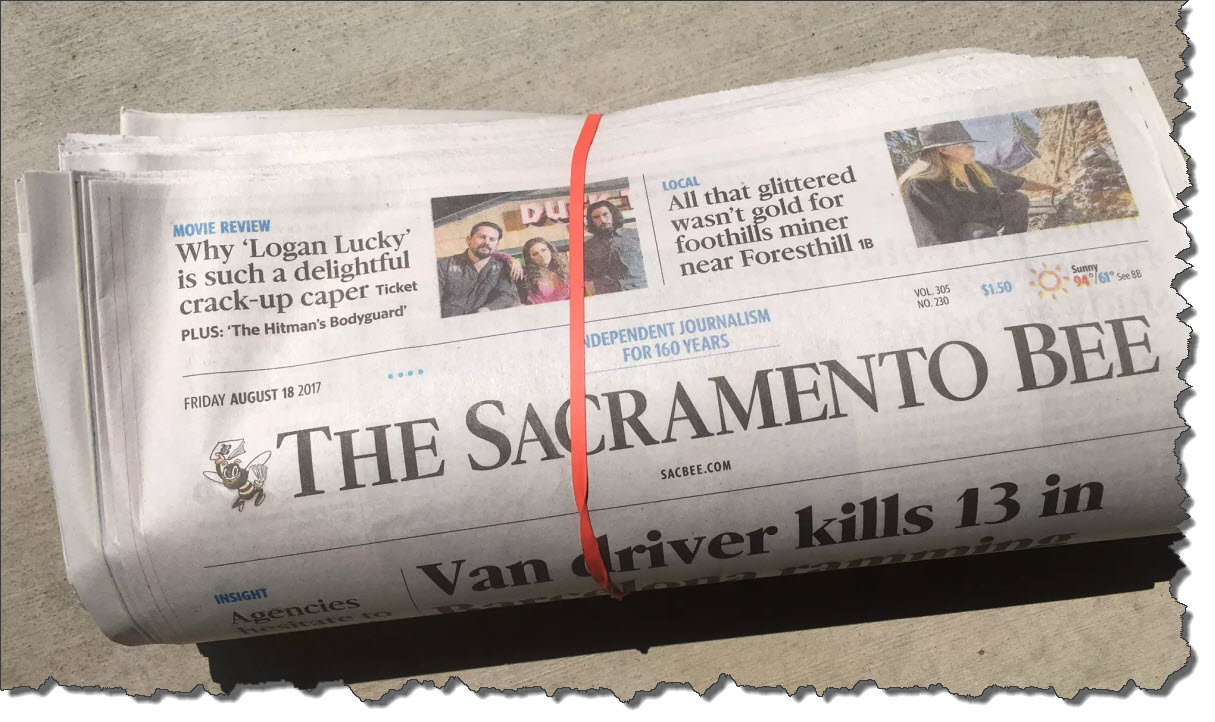 SACRAMENTO – The daily newspaper business has been going through some very difficult times in recent years, but a lawsuit filed in Sacramento County Superior Court here all but suggests McClatchy Newspapers – parent company of the Sacramento Bee – has been swindling subscribers to retain readers.

McClatchy Newspapers is the subject of a class action suit challenging its business practice of automatically renewing newspaper subscriptions without confirming that consumers really wanted to re-subscribe, according to the Sacramento County Superior Court lawsuit filed in October of 2014, nearly five years ago.

The practice violates the California Automatic Renewal Law that took effect in 2010 to specifically stop the practice, charged the lawsuit.

According to the original pleading filed by a Joseph Cortez, a Placer County resident, and possibly representing a class of hundreds, maybe thousands, of current or former subscribers to McClatchy newspapers, consumers are enrolled into subscriptions for the Bee without first agreeing to them, and then sent to collections if they refuse to pay for the “courtesy” newspapers.

“Defendants then charge the consumer for the post-subscription newspapers that were neither requested nor ordered. Defendants call this practice of providing newspapers after a consumer’s subscription has expired a ‘courtesy service.’ (C)onsumers who refuse to pay for the ‘courtesy newspapers’ are sent to collections,” the lawsuit alleges.

McClatchy, according to the lawsuit, relies on promotional materials and “fine print language,” sometimes “barely visible,” that states the Bee will continue an expired subscription unless the

“This practice of automatically renewing subscriptions through the use of fine print disclosures is directly
prohibited by the California Automatic Renewal Law and constitutes an unlawful, unfair, and deceptive business practice,” the lawsuit asserts.

Lead class action Plaintiff Cortez said he kept receiving the Bee, even though he did not renew the subscription in February of 2014. He then began to get regular weekly phone calls from the Bee asking him to renew – the newspaper was still being delivered all this time as a “courtesy,” according to the newspaper.

That courtesy, he said, came with a “price” – $28, the cost of the newspapers being delivered to him for months despite his decision to not renew the Bee.

Even if Cortez had renewed at some time after the end of his original expiration date, McClatchy has a practice of “secretly” backdating that new subscription to the previous expiration date, the time in which the consumer did not re-subscribe but was receiving unsolicited “courtesy” delivery, said the suit.

McClatchy has defended its action, explaining that its promotional materials noted that the subscription continues, even if the consumer does not specifically renew.

But the class action lawsuit counters that when that disclaimer does appear it is “buried in extremely fine print that is barely legible at the bottom of the material,” adding that if disclosure is “clearly contradicted by the large bold print in the materials that expressly states that consumers can select a ‘Subscription Length’ that is for a specified period of time.”

In the end, Cortez – after repeatedly being contacted by a collection agency – paid the disputed $28 “under protest” to protect his good credit rating.

Class action plaintiffs are described the pleading as consumers who were “invoiced” or “forced” to pay for subscriptions to a McClatchy Newspapers after their original subscriptions ran out.

The lawsuit claims, in its causes of action, that McClatchy violated several Business and Professions Codes, and specifically the California Automatic Renewal Law, which took effect in 2010 after a 2006 action against Time Inc. by attorneys general in 23 states that found consumers did not explicitly approve of an extension of a subscription – under the CA law, consumers need to take some step to affirmatively agree to extend a subscription.