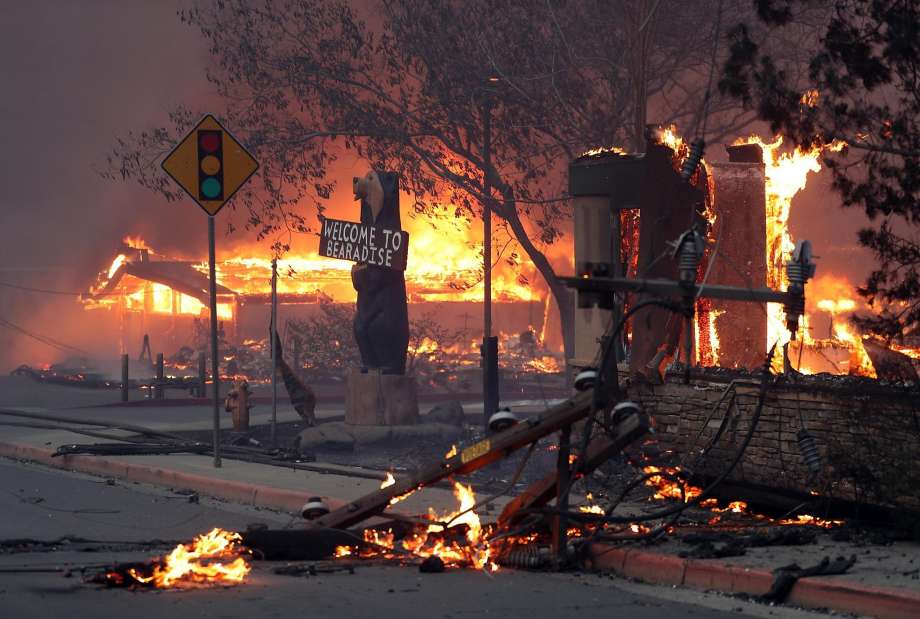 Just before dawn this last Friday (November 8), Carol Dyer climbed into her car and headed two hours north to see what was left of a home she had left in a panic exactly a year earlier. “I want to see if the land has been cleared. If it has then I will see if I can dig out some sculptures my spouse made me. After that, I will leave my old house key behind some Ponderosa pines. I don’t plan to return so I guess it will be my last goodbye,” Carol says softly.

Carol is a 30-year-old artist and former care-giver, living in Woodland. Up until November 8, 2018, she was a resident of Paradise, a small town in the Sierra foothills devastated by an unprecedented fire that swept through it, leaving 85 people dead, 18,000 buildings erased and an entire community displaced. It was the deadliest and most destructive fire in Californian history.

As we mark the first anniversary, the stories in the media seem to follow a pattern, sharing stories of the residents who have returned and the ways the town is emerging from the ashes. “Paradise regained: a resilient town rebuilds” says NBC news. ‘The air feels different: Paradise isn’t giving up,” says The Guardian.

The stories attest to a human desire to find meanings in tragedy and the determination of some its residents to rebuild. But these stories perhaps also seek to bury the trauma created by such a disaster – a trauma that we are reluctant to face when such disasters in a time of climate crisis may be “the new normal.”

Like many of the stories shared after the fire, Carol’s story of escape is a harrowing one. She had woken early that morning to a beautiful sunrise with no idea that at the same time a fire had ignited several miles to the northeast of her. Carol was due to visit a care client that morning. As she drove into Paradise, she realized it was getting darker and darker and that ashes and embers were falling onto her car hood. “People were driving erratically and I ended up rear-ending another car. That’s when I called 911 and was told for the first time that there was a mandatory evacuation. Up until then I had received no texts, no messages, no warnings, nothing.”

She rushed home to grab a few personal things. “By the time I left, about 9 am, I could barely see the sun, and by the time I hit the traffic on Pearson Road, it was pitch black with a glowing redness silhouetting the trees. I thought I am probably going to die and was very scared, but I tried to take deep breaths, thinking if this is it, being scared would not help.”

She made it out alive. But many didn’t, including one of her care clients, Evva Holt, who was 85. Evva succeeded

in getting out of her assisted-living facility but died in the truck when it took the wrong turn and got swept up in the fire.

For those who did survive, it wasn’t just a case of starting again. Carol’s husband was studying and working in Davis, so she at least had a house to go to, but it wasn’t the same as home – even after she and her spouse moved from his small flat to a house in Woodland. “The life I used to know is gone. I lost everything and it’s very hard to find a new starting point when you are starting from nothing. The fire destroyed my home but also my sense of safety and my support.”

Carol tells of how she loved her home in Paradise. “Where I lived, it was so nice. It was a quiet, peaceful, healthy place to be. It was dark at night, you could see stars. You could leave your doors unlocked and not worry about it. But it’s gone, the soil is completely contaminated, the black oak trees are all gone and many of the Ponderosa pines too. Most people have moved elsewhere.”

She still struggles to see Woodland as a long-term home. “People honestly are not even aware they have people from Paradise living in their town. Most Paradise residents ended up in Butte County, and most of the emotional support I get is from older friends in Sacramento and elsewhere.”

As one way to respond to the trauma and make sense of her experience, Carol initially threw herself into campaigning for climate action.  She had been concerned about climate change before, but she felt speaking out was something concrete she could do to make a difference. Less than 3 months after moving to Davis, she joined 70 others demanding Congressman Garamendi recognize the climate emergency and spoke at a number of subsequent events, contributing to Garamendi’s eventual decision to come out in support of the Green New Deal.

“I think there is a huge level of denial here in California at the level of  extreme natural disasters we are witnessing. I was aware of it before the fire. In Paradise, we were getting much less rain – I hadn’t even seen snow in the town for several years, which had always been the case before. It’s not normal to see all these fires or to be so dry so late in the year as we are experiencing again this year.”

Indeed, some commentators have called the 27,000 Paradise displaced residents. California’s first “climate refugees.”  Carol says at first she balked at the term. “I didn’t see myself as a refugee, as California is my home. I felt that applied to people outside California, like those in Honduras or Guatemala who have had to leave their home due to habitat destruction or droughts. But the reality is I lost a home and do feel like a nomad, so now I think the term makes more sense.”

Carol is also angry at the inaction of PG&E, which California’s fire authorities in May officially determined as responsible for the fires due to faults in its transmission lines. “They purposely decided to prioritize their shareholders and executives rather than investing properly in infrastructure. We need to take them over and not force taxpayers to pay for their mistakes.”

Carol has had to be careful, though, in how much she campaigns. “I try to be helpful and supportive as much as you can if I can be a voice, but being very active can be a little too stressful for me.” As an artist, Carol also uses her creative skills with drawing or bead work to process her experience. She speaks about a recent painting of a polar bear, a classic climate change meme, but one now invested with a double meaning as she has used it to reflect on the bear’s loss of home in the Arctic while Carol  processes her own loss.

Carol’s experience a year on from the Paradise fires speaks to the challenges of rebuilding and recovering in a time of climate change. It also attests to the profound difference between house and home. Rebuilding a house is hard enough – especially if you aren’t wealthy or aren’t insured – but it is far more challenging to rebuild a sense of home, given how homes are tied to memories, to a community, to a time and place. When those threads are torn apart through a profoundly traumatic experience like the Camp Fire, it requires a long process of weaving to recreate home. Even more so in a society that has long prioritized individualism and personal success over community and solidarity.

Carol admits that as much as she tries to live in a positive spirit, she finds it hard now “to be attached to anything, to connect to where I live or to attach to the community I am part of because it could all be gone tomorrow.”

She says she thinks “home is still somewhere in the mountains,” but doesn’t yet know where.

Interview by Nick Buxton, who is a researcher and writer on environmental and social justice. He lives in Davis with his family and is a member of various community groups including St. Martin’s Church and Yolano Climate Action.

Every Friday, between 12-1pm, there is a rally held outside the City and School District offices at 5th and B, next to Central Park, Davis. It has been held since the historic global climate strike on September 20.  On Friday, November 8, the rally held banners saying “Remember Paradise” and paid respects to all those who have died in California’s wildfires. https://www.facebook.com/SunriseDavis/