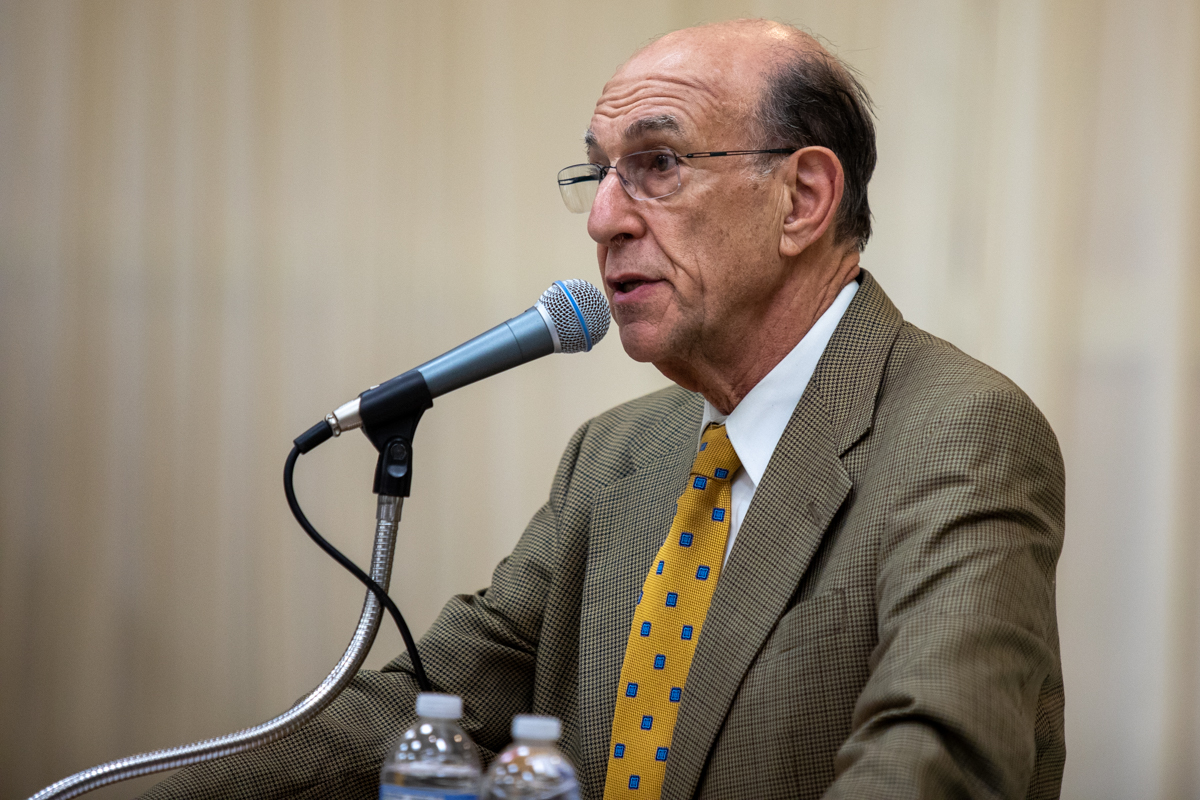 We have seen a lot of side issues in Davis this year – from traffic congestion created on Mace to the issue of the homeless respite center and more. But this week was a reminder that, at the core, the housing issue still resonates.

Richard Rothstein gave about a 40-minute presentation last Monday at the League of Women Voters event in which he argued that during the civil rights movement, policymakers “left in place the biggest segregation of all” – residential segregation – and he traced the history of segregation specifically and explicitly to government policies, particularly on affordable housing.

It was nearing the end of the evening on Monday night. A packed house. More than 200 people there to see a discussion led by Richard Rothstein on housing discrimination. But there was something different about the audience. Intermixed with the “usual suspects” were scores of people that don’t normally attend such meetings – young people, professionals, students, and people of color.

The housing crisis has completely changed the dynamics of the city from what we might have seen even ten years ago.

As Assistant City Manager Ashley Feeney pointed out, when the city polled on issues facing the city, the issue of housing affordability was the top issue by far. We have seen a year when issues like Mace, downtown parking, the homeless and even the claw have dominated. But lurking below that surface is housing. And it’s not the stop housing movement that we have seen for years.

If you want a flavor, here it is. It was audience question time. Cards received. A card was read.

The person asked: “How can we maintain that small-town feel and still deal with our housing issues?”

Richard Rothstein rose to the mic one more time, and stated that a “small-town feel is a euphemism for segregated community.” The audience roared with approval.

It is hard to know what this means of course. It was one audience. But the small-town feel has been for years, probably decades, the rallying cry of slow growth Davis. It embodied the construction of Measure R, our ethos. And now at least someone on one night took the moment to call it for what it was – or what it seemed to be to an outsider.

I guess a critical question then, which underlies our policies and our politics, is whether the whole movement for growth control is linked to issues like small town feel, safety, preserving our character and the like – a racial issue.

As many of you know from the district elections discussion, I believe that Davis is not only a good deal more racially polarized than we have thought, but also discriminatory to people of color.

I would argue that race remains the defining issue in America.  We have been through the discussion on voting patterns nationally and the single biggest issue, I would argue – well above class,

gender, and education level – is race.  The racial gap on voting is about twice that of even the gender gap if you look at the 2016 elections.

Someone came up to me later. They didn’t understand. Why does everything have to be about race, they asked? How do we get past racism when all some people want to talk about is race?

They don’t seem to understand. Race has been the number one driving force for housing policy for hundreds of years. What Richard Rothstein shows pretty conclusively is that the segregated patterns of the north – far worse in terms of housing than at any time in the south – is the result of deliberate governmental policy.

We can’t change those patterns by accident because, despite the euphemism – de facto segregation, it’s not that.

“This doesn’t sound to me much like de facto segregation,” Richard Rothstein argued as he described concerted efforts to keep neighborhoods segregated.

But the other problem – the worse problem – is that we keep this community segregated because we have so constrained a supply as to drive up prices.

Here’s the thing Mr. Rothstein has said: “[U]nless we confront the history of this country… we are not going to be solve this problem.” And he added that “decreasing density is not going to desegregate this community.”

But he claims: “Policymakers know how to fix this.

“There is nothing mysterious about how to redress segregation in this country,” he added.  He noted that Justice Roberts “maintains his staff by denying the history, but if confronted by the history, there would be no justification for not addressing this de facto myth.”

One solution, he says, is that “we should abolish zoning ordinances that prohibit the construction of anything but single-family homes, sometimes on large lot sizes.  Combine that with inclusionary requirements to make sure that we don’t simply increase density for the benefit of the middle class that’s also suffering from the housing crisis, but also increase density for the benefit of racial minorities who have been excluded from participating in decent housing in this country.”

He added, “We should reverse the priorities of things like the Low Income Housing Tax Credit which places a priority on low-income neighborhoods and requires that more of them be built in high opportunity neighborhoods.

“We should resist the gentrification process that simply converts low income segregated neighborhoods into high-income white neighborhoods,” he said.  “We should do that with policies like rent control, limits on condominium conversions, inclusionary zoning requirements.”

He said, “These policies are well known – what is missing is a new civil rights movement that’s going demand that these policies be implemented.”

In a community that says affordability of housing is the top issue, we will see how much of this actually gains traction.

Share:
Tags:Affordable HousingCivil RightsHousingInclusionary HousingRichard RothsteinZoning
Previous : Why Are Prosecutors Still Seeking to Execute People Who Have Innocence Claims and Untested DNA?
Next : Sunday Commentary: Process and the Need to Solve Vexing Problems in Davis

36 thoughts on “Sunday Commentary: Rothstein, the Housing Issue, and Discrimination in Davis”